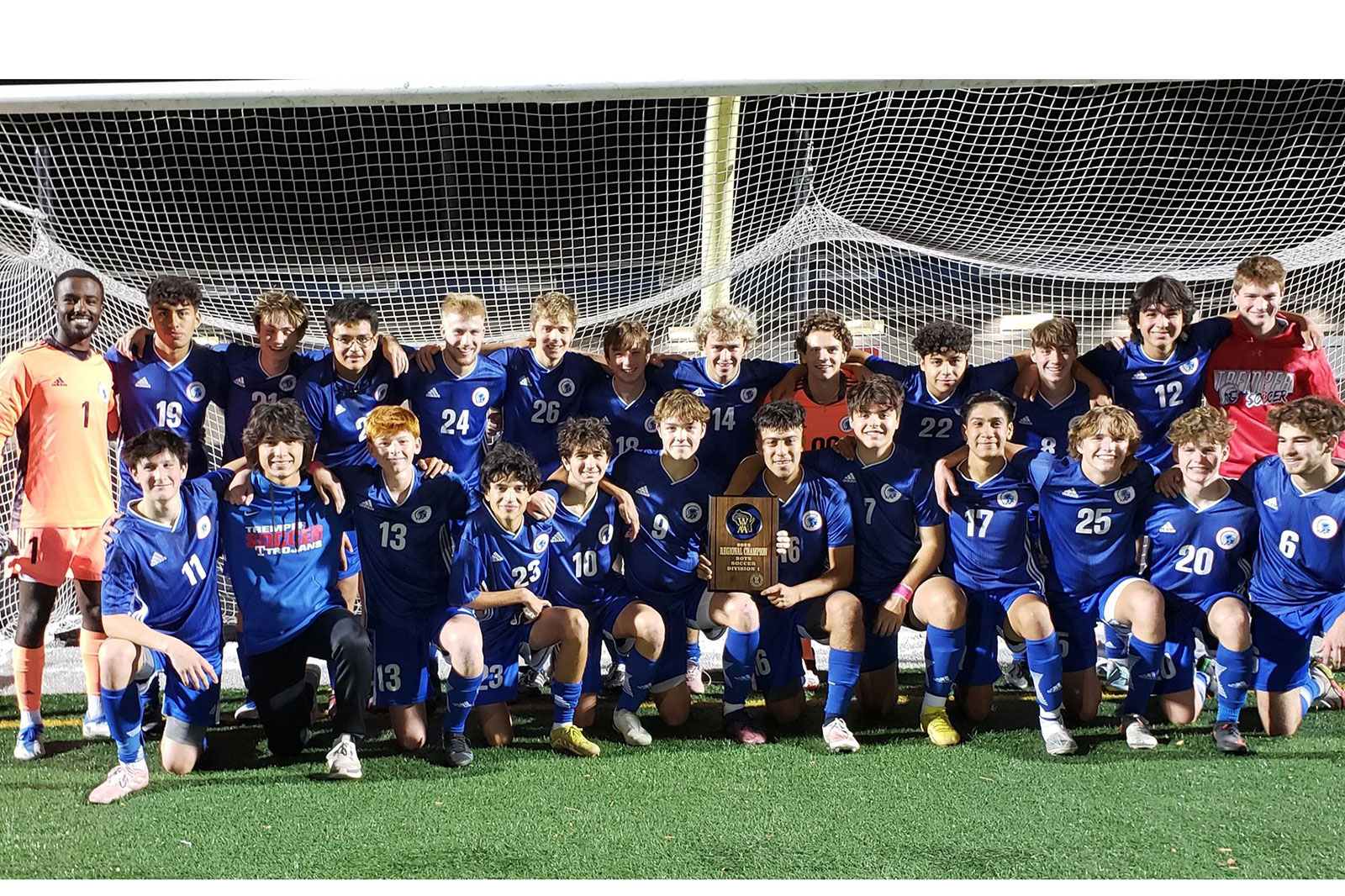 The Tremper boys soccer team is fresh off winning a WIAA Division 1 regional championship and will host Southeast Conference foe Oak Creek in a sectional semifinal at 7 p.m. Thursday at Ameche Field. The Trojans and Knights shared the SEC title this season and played to a scoreless tie in their lone regular-season meeting.
PHOTO: TREMPER SOCCER TWITTER
Sports

The glow of “Friday Night Lights” is still going strong in Kenosha County.

Both games kick off at 7 p.m. Friday.

Football is not the only high school sport in the county going deeper into postseason action this week, however.

Those teams will all be vying to advance to Saturday’s sectional finals in boys and girls volleyball and boys soccer.

Seeded No. 2 in its sectional, Wilmot will host No. 3 seed Burlington on Tuesday night with a trip to Saturday’s sectional final on the line. In Tuesday night’s other sectional semifinal, No. 1 seed Union Grove hosts No. 5 seed Indian Trail, with Tuesday’s winners meeting in Saturday’s sectional final at Burlington with a trip to the State Tournament at stake. The State Tournament is scheduled for Nov. 3-5 at the Resch Center in Green Bay. Wilmot is seeking its third State Tournament appearance in boys volleyball, but its last came way back in 1951, during the sport’s first iteration as a WIAA-recognized sport. Wilmot and Union Grove shared this year’s Southern Lakes Conference title, with each going 9-1 in conference matches.

NOTE: Indian Trail senior outside hitter Jackson Wilhelmson is one of five student-athletes nominated this week for WisSports.net’s Hometown Ticketing Athlete of the Week. Wilhelmson racked up 23 kills, seven digs, seven blocks and three aces in the Hawks’ thrilling five-set win over Westosha Central in a regional final on Friday (Oct. 21) at Central. Voting is open until 2 p.m. Thursday and can be done by visiting THIS LINK.

Tremper and Oak Creek shared this year’s Southeast Conference title with 6-0-1 conference records, including a scoreless tie at Oak Creek in the SEC finale on Oct. 6. Now, the second-seeded Trojans – ranked No. 6 in Division 1 in the final WisSports.net state coaches poll – host the third-seeded Knights for a second time this season in Thursday’s sectional semifinals. This time, the loser’s season ends, and a tie would be decided in a shootout. The winner advances to Saturday’s sectional final, scheduled for 1 p.m. Saturday at Bradford, against either top-seeded and second-ranked Milwaukee Marquette or fourth-seeded Waukesha South. After that is the State Tournament, scheduled for Nov. 3-5 at Uihlein Soccer Park in Milwaukee. The Trojans are looking to make the ninth State Tournament appearance in program history and the first since 2019. Tremper has been led offensively this season by the senior duo of Conner Heath (29 goals, eight assists, 66 points) and Daniel Chiappetta (15 goals, 18 assists, 48 points).

With last Friday’s 48-12 home victory over Milwaukee Reagan, Central claimed just the second postseason victory in program history and the first since 2004. But now the Falcons, under third-year head coach Jared Franz, have their sights set on reaching the state quarterfinals for the first time ever, and they have a great shot. As the No. 2 seed in its bracket, Central has a second-round home game, and it’ll be against a familiar opponent in SLC foe Burlington, a No. 6 seed. The Falcons are now 8-2 this season and are looking for their second victory over the Demons (5-5) in 2022. But the first came by just a 35-30 margin back in Week 4, on Sept. 9, at Central, so you can probably assume Friday’s second-round playoff rematch between the rivals will be close. Whoever wins Friday will advance to the state quarterfinals next Friday (Nov. 4) against either top-seeded and fourth-ranked Brookfield Central or fourth-seeded Racine Park. If Central takes care of Burlington and Park upsets Brookfield Central on Friday night, then the Falcons would host a third playoff game this season in the quarterfinals. Central has featured a high-powered offensive attack all season, led by junior quarterback Brock Koeppel (1,798 passing yards, 569 rushing yards, 31 total touchdowns) and junior receiver Collin Meininger (61 receptions, 935 yards, 11 touchdowns). Additionally, the Falcons’ defense is limiting opponents to 19.1 points per game.

St. Joseph, the No. 1 seed on its side of the Division 6 bracket and ranked No. 4 in the division in the latest WisSports.net state coaches poll, faced a solid test in its first-round game last week at Ameche Field against a very physical No. 8 seed in Mineral Point. But the Lancers pulled away to prevail, 27-0, to improve to 10-0 and record their sixth shutout of the season. Next up is No. 5 seed Lancaster, which cruised past No. 4 seed Waterloo, 32-6, on the road in the first round last week. Lancaster (7-3 overall) finished in third place in the Southwest Wisconsin Conference during the regular season. With a win Friday, St. Joseph would host a third playoff game next Friday (Nov. 4) in the state quarterfinals against either second-seeded and third-ranked Darlington or third-seeded and sixth-ranked Belleville. Led by head coach Matt Rizzo, the Lancers have dominated their 10 opponents so far this season, outsourcing them by a combined 417-55. Junior running back Jayden Gordon has 160 carries for 1,581 yards and 24 touchdowns. Per WisSports.net stats, Gordon ranks ninth in the state (all divisions) in both rushing yards and rushing touchdowns. Junior quarterback Eric Kenesie, meanwhile, has totaled 856 passing yards and 16 touchdowns and 664 rushing yards and eight more scores, while senior tight end Luke Schuler has caught 29 passes for 516 yards and nine touchdowns.