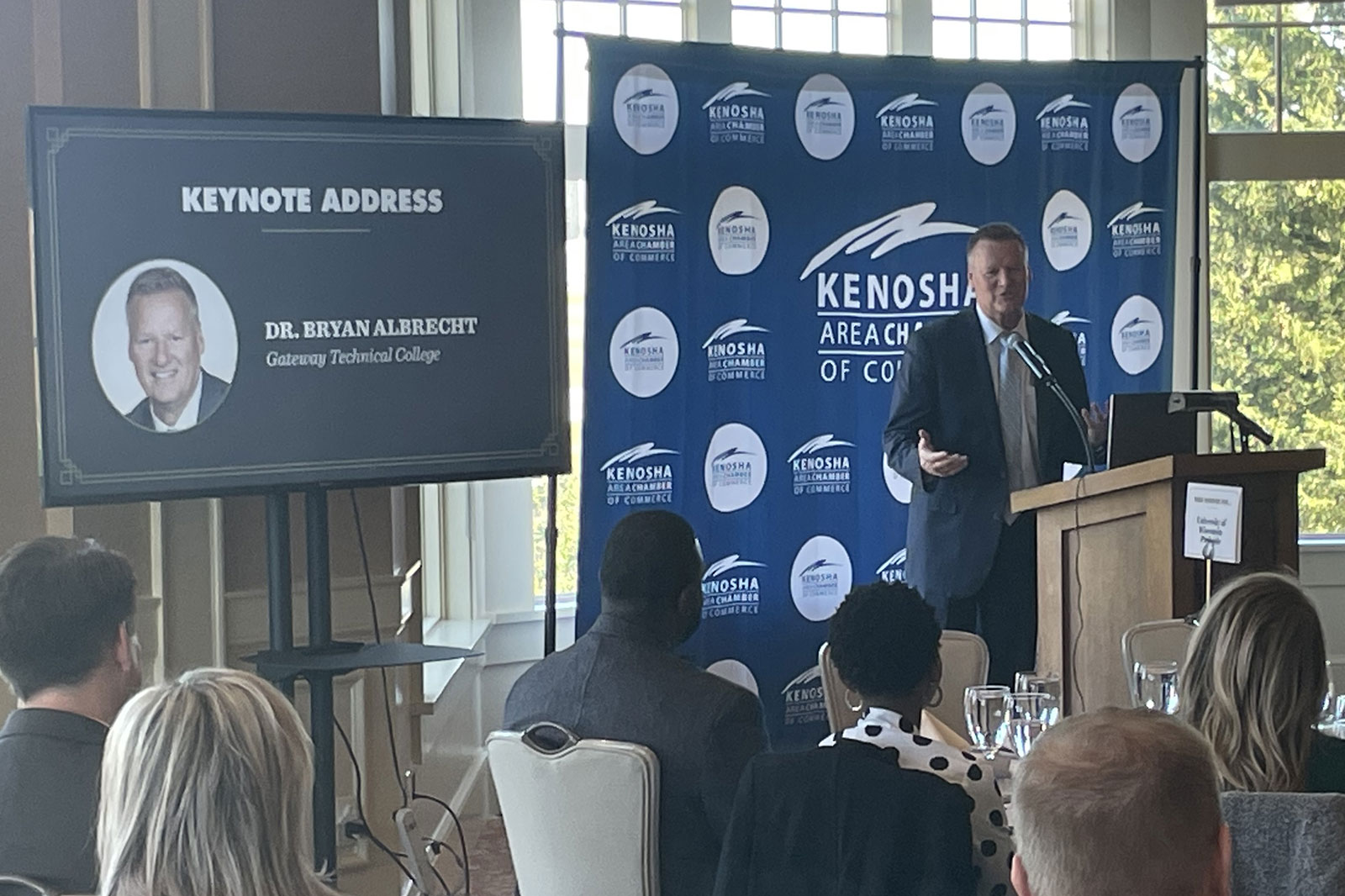 Dr. Bryan Albrecht, who is retiring as the Gateway Technical College President and CEO after 38 total years in education, was the keynote speaker at Wednesday’s 106th annual Kenosha Area Chamber of Commerce meeting, held at The Club at Strawberry Creek.
PHOTOS: MIKE JOHNSON
Local, Business, News

That’s the theme that the Kenosha Area Chamber of Commerce has lived by over the last year, and it was celebrated with an inspirational lineup of speakers and awards — and a fantastic meal, of course — Wednesday afternoon during the Chamber’s 106th annual meeting, held at The Club at Strawberry Creek.

The Chamber announced award and scholarship recipients and confirmed its new board slate for the next year, then the meeting was capped off with a fantastic 10-minute speech by retiring Gateway Technical College President and CEO Dr. Bryan Albrecht, Wednesday’s keynote speaker.

The meeting was led by Chamber President and CEO Dave Strash, who’s beginning his second year in that role.

Strash opened the meeting by presenting a “by-the-numbers” look at what the Chamber accomplished in 2022. That included the addition of 76 new members to make 709 total, 54 Chamber events, 363 Leadership Kenosha graduates since 1999, $12,500 awarded in scholarships, 5,300 Expo attendees and thousands of social media followers.

“We are your Chamber, and we are here to serve you, our members,” Strash said.

Following a video of testimonials from Chamber members and opening remarks from outgoing Chamber Board Chairperson Amanda Blommel, who’s completed her two years in that role, the winners of this year’s Kenosha Area Chamber of Commerce Foundation scholarships were presented by Renee Young-Trego of the University of Wisconsin-Parkside.

This year’s winners were Mackenzie Beller from Uline, Olivia Lehmann and Justus Wilhoit from the Kenosha Unified School District, Jonathan Murray from Country Financial and Alec Schabowsky from the City of Kenosha.

Wilhoit’s parents came to the dais to accept the award for their son, who’s away at Princeton University, where he’s majoring in journalism. Wilhoit wrote a thank-you letter for his parents to read Wednesday.

“Hard work pays off, and if you believe in yourself, you can go a long way,” Wilhoit’s letter said.

Next, Marisa Markowski of the United Way of Kenosha was presented with a full-tuition scholarship to Herzing University to complete her education. Markowski, a resource involvement manager at United Way, is going back to school to earn her MBA.

The meeting then turned to honoring a number of Chamber award recipients for 2022.

The first award was the Ambassador of the Year, given to Joanna Carlberg of Joanna’s Digital Images. A portrait photographer specializing in business branding, headshots and family photography, Carlberg has been a member of the Chamber for several years but became an ambassador about a year ago to help promote the Chamber in Kenosha County west of I-94.

“I feel that being involved in a community is the best way to build your business,” Carlberg said in her speech.

After Carlberg was honored, Hospice Alliance, 10220 Prairie Ridge Blvd. in Pleasant Prairie, was presented by Strash as the Chamber’s Best Place to Work.

Hospice Alliance Executive Director Rita Hagen accepted the award and spoke of the business’ commitment to treating its employees with respect and offering them good benefits.

Next, Cathy Savaglio, a Senior Mortgage Loan Originator with SecurityNational Mortgage Company, was honored by Blommel with the Chairman’s Award.

Savaglio talked about seeing life as a kaleidoscope, where all the pieces “come together to make something beautiful.”

“I challenge all of you: Get involved and put your effort and input behind it, and great things will happen,” Savaglio said.

After the awards were presented, the Chamber honored its Leadership Kenosha project winners, Terra Wendricks and Laura Ervin. They helped develop a finance campaign for the Shalom Center to celebrate its 40th anniversary this year.

The Chamber also approved its 2022 board slate near the end of Wednesday’s meeting.

The main announcement was that Wendy Gauss of M.V. Properties/Re/Max Newport Elite will take over for Blommel as the Chamber Board Chairperson for the next two-year term.

Finally, Albrecht delivered a snappy, inspirational speech to conclude Wednesday’s meeting as he heads into retirement.

Albrecht has spent the past 38 years in education, including 16 as President of Gateway Technical College. He earlier announced his retirement this fall.

On Wednesday, Albrecht touched on the lessons he’s learned and the observations he’s made during his career in the area.

First, he talked about the importance of developing confidence to share new ideas and said he’s met many leaders in the community recently who aren’t afraid to share their thoughts.

“They’re shaping a new Kenosha,” Albrecht said. “And if we get involved and we challenge each other to share our own thoughts and ideas, we continue to grow as an organization and as a community.”

Albrecht also touched on the importance and power of building success by sharing with others. By doing so, Kenosha can spread its talent and ideas far and wide.

“… I’m a different person than I was when I started at Gateway. I’m different because I’ve had a chance to meet so many of you and others across our region.”

Lastly, Albrecht talked about the importance of passing on your legacy. He spoke about his daughter and his grandchildren and how much it means to him to leave a better world for them.

“And I can be a stronger advocate, and I can help educate others, and I can inform them, and I can engage them in new ways to continue to build our capacity. If we all collectively do that, we will have achieved our goal to make life a little better for the next generation.”

In the end, Albrecht said, it’s up to us to choose what we want from our community.

“What do you want from your Kenosha?” Albrecht said. “Do you want to listen to the naysayers about how challenging it is, and there’s just not enough support? Or do you want to say, ‘We live in a great community, a community of caring people that have come together not only to solve problems, but to celebrate the successes.’

“That’s what I want to say about the community that I’ve lived in. I’m sure it’s the same for you.”