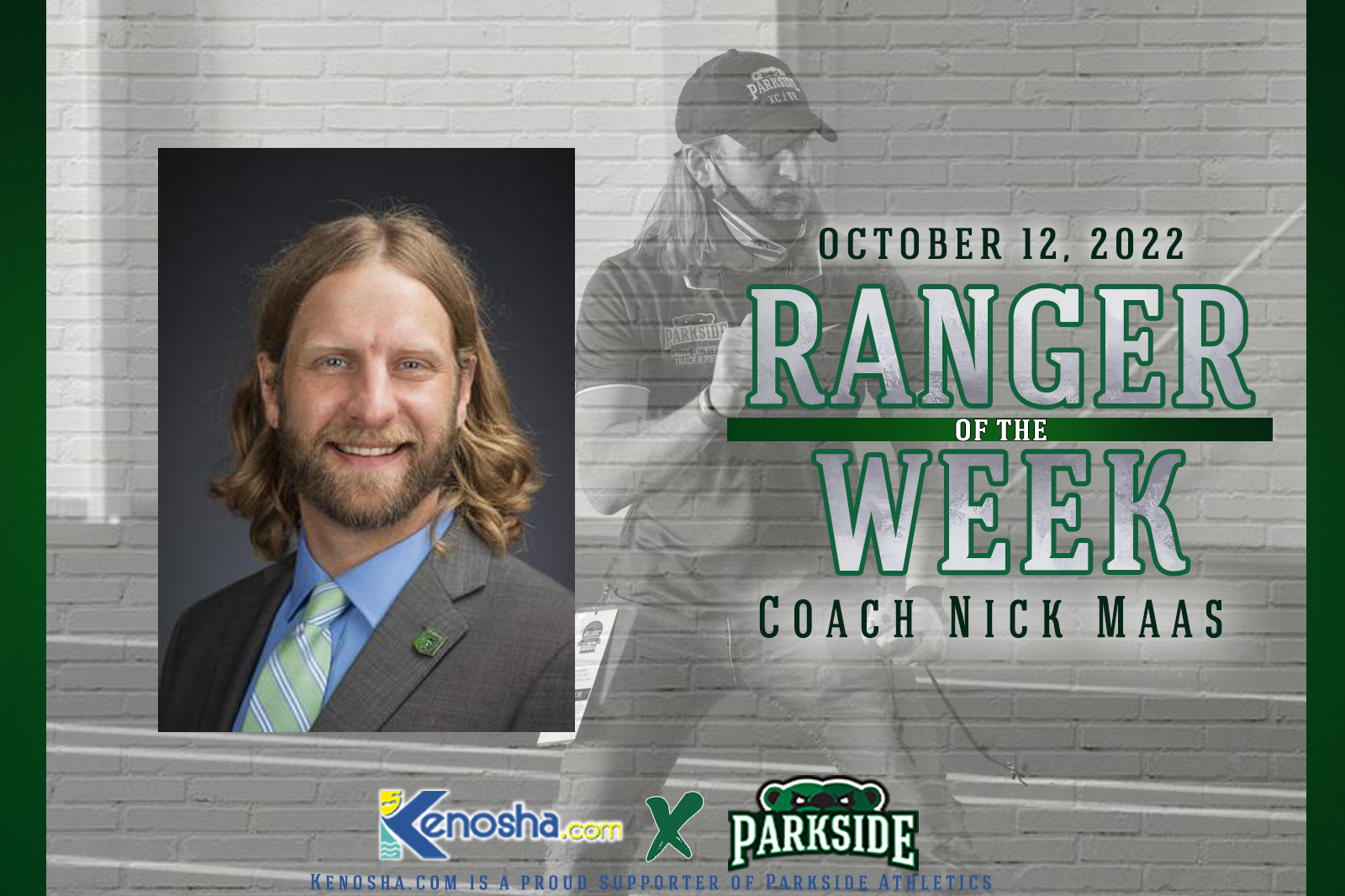 Ranger of the Week: Nick Maas

The Parkside cross country program had an incredible day on Saturday, Oct. 8. The Rangers hosted the Lucian Rosa Invitational at the Wayne E. Dannehl National Cross Country Course. During the meet, the Rangers recognized their four seniors, Emma Meyer, Walker Miller, Ramon Romero, and Katherine Sim. They also recognized over 60 alumni who came back to support the program for Alumni Day.

The Rangers performed very well on the course, with athletes on both the men’s and women’s side coming away with career-best performances. The Rangers placed second in the men’s race and ninth in the women’s race. A lot of the credit to Parkside’s recent successes on the cross country course goes to their head coach, Nick Maas, our Kenosha.com Ranger of the Week.

The Rangers went into the meet with a focused mindset and everything went perfectly for the team. The meet featured nationally-ranked talent from both the Midwest and the South Central Regions. The men’s team pulled off a major upset, defeating nationally ranked Wayne State and placing second overall. The Rangers are now ranked sixth in the Midwest Region, the highest they have been ranked since 2016.

“We have been talking about being in a national position for years,” Maas said. “This performance was a huge confidence boost for our team. We just need to maintain this momentum and stay focused as we head towards regionals.”

The Rangers are off this weekend, but will return to action on Oct. 22 in Detroit, Mich., as they compete at the Wayne State Warrior Challenge.

Entering his fourth season leading the cross country and track & field programs, the Tama, Iowa, native joined the Rangers in 2019 and has led the Rangers to years of growth and success. In the 2021-22 season, Maas coached the Rangers to seven school records, 14 NCAA Championships provisional qualifiers, 19 All-Conference performances, 13 Academic All-Americans and a GLIAC Championships Athlete of the Meet (Nic Davy, 2022).

Maas has also increased recruitment efforts and will have 72 athletes competing for the track & field team this year, which will be the largest roster in Parkside history. The team will feature athletes from six states and four counties.

Off the track, Maas has also placed an emphasis on the academic side. At the end of the 2021-22 season, the men’s team ended with a cumulative grade-point average of 3.39, while the women’s team finished with a 3.49.

The Rangers may have the weekend off, but Coach Maas looks to achieve a large goal of his own. On Friday (Oct. 14) at 8 a.m., Maas will toe the starting line for the Mines of Spain 100 Mile Race in Dubuque, Iowa. This is the first time Maas has entered a race of this distance. His two goals are to finish the race and finish the race in under 24 hours, and hopefully among the top 10 finishers.

Maas has competed in four 50-mile races, as well as a 24-hour run that he accomplished last summer with Parkside alum Jack Diamond. This 100-mile race will be a new challenge that he hopes to tackle.

“I have been looking for the next big thing,” Maas said. “I want to be able to push my mind, body, and spirit to the limit and see what happens. I also want to show my athletes that if you believe you can do something and you put your mind to it, you can accomplish anything.”