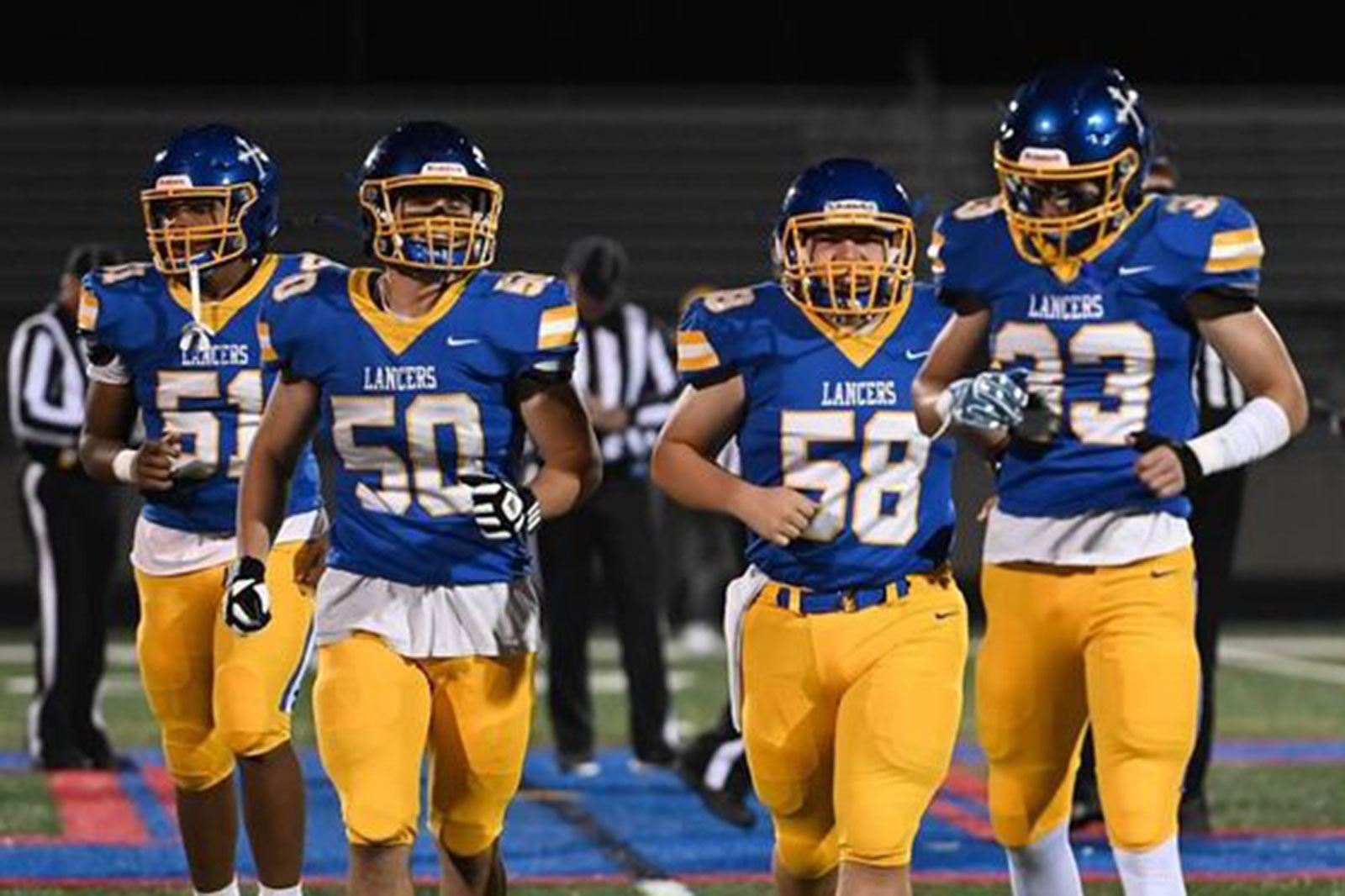 It’s the final week of the regular season for high school football teams in Wisconsin, which means playoff berths and conference titles are on the line.

That’s certainly the case in Kenosha County this Friday night, as three games with big implications are on tap throughout the county.

Undefeated and state-ranked St. Joseph hosts Racine Lutheran at 7 p.m. at Ameche Field with the Midwest Classic Conference title on the line, as both teams enter the game 6-0 in conference play.

Over at Jaskwhich Stadium, also at 7 p.m. Friday, Indian Trail hosts Racine Case in Southeast Conference action. At 3-3 in SEC play, a win for the Hawks would secure them automatic playoff eligibility. The Eagles, meanwhile, can get to three SEC victories with a win Friday, which could put them at least in the playoff conversation.

Meanwhile, out in the county, Westosha Central hosts Wilmot at 7 p.m. Friday in the renewal of their long-standing rivalry. The Falcons reached four Southern Lakes Conference wins by defeating Elkhorn last week, thus securing their first automatic playoff bid since 2010. The Panthers are stuck at two SLC wins but with a defeat of their county rivals could enter the playoff conversation, as the field will be seeded over the weekend.

And football isn’t the only high school sport with a lot on the line this week.

Several county girls tennis players will be competing in the Wisconsin Interscholastic Athletic Association State Individual Tournament, which runs Thursday through Saturday at Nielsen Tennis Stadium in Madison, while conference titles will be on the line in cross country, boys volleyball and girls volleyball this week.

Yes, this three-day event is technically well out of Kenosha County, but it’s too big not to include, especially since some county athletes could make deep runs in their respective brackets. In the Division 1 singles field, Indian Trail senior Lainy Ristau is seeded No. 14 in the bracket, while Westosha Central senior Gwen Hammond is seeded No. 8 in the bracket. Both have significant State Tournament experience, as Ristau is making her fourth state appearance in four years for the Hawks, while Hammond is back at state for the first time since winning the Division 1 state doubles title while at Wilmot in 2020 with then-senior Halle Rosentreter. Hammond transferred to Westosha Central following that season for academic reasons but had to sit out the high school girls tennis season in 2021 due to WIAA transfer rules. Now she’s back at state seeking to cap her fantastic high school career with another state title, this time in singles at a different school. Also in the Division 1 field at state this week are Indian Trail sophomore Mia Franke and Tremper freshman Nicole Porut in singles and the Tremper duo of senior Katelyn Rocha and sophomore Leah Weisinger in doubles. In the Division 2 singles bracket, meanwhile, St. Joseph sophomore Bella Rizzo is making her second straight State Tournament appearance after reaching the second round as a freshman in 2021. In both divisions, the tournament starts Thursday, continues Friday and concludes Saturday with the placement and championship matches.

We’re down to the last week of the regular season in high school football, and a playoff berth is at stake for Indian Trail in its Southeast Conference finale against Case. The Hawks (4-4 overall, 3-3 SEC) would secure automatic playoff eligibility in the Division 1 field with a victory, which would give them a winning conference record. A loss, however, would leave them at the mercy of the WIAA’s system of tiebreakers, so the best way for the Hawks to get in is simply to win Friday night. The WIAA will hold a live reveal show for its playoff football brackets from 10 to 11 a.m. Saturday morning on Bally Sports Wisconsin. Indian Trail is seeking its first playoff bid in a non-COVID year since reaching the second round in back-to-back years from 2018-19. The Hawks have featured one of the most explosive offenses in the area this season, as they’re averaging 35 points per game through eight games. Junior quarterback LJ Dagen is second in the SEC with 927 rushing yards and has accumulated 1,524 total yards and 17 touchdowns, while senior running back Justice Lovelace has totaled 986 yards and a whopping 22 touchdowns. Indian Trail gave defending WIAA Division 1 state champion and state-ranked Franklin a heck of a battle last week before falling, 19-14, at Franklin in a game that was tied 7-7 going into the fourth quarter.

No matter the playoff implications, a football game between Westosha Central and Wilmot is always fraught with the intensity of a great county rivalry. But Friday’s Southern Lakes Conference game has a lot more attached to it. Last week, the Falcons (6-2 overall, 4-2 SLC) snapped a two-game slide with a big 41-7 victory at Elkhorn to make a major breakthrough under third-year head coach Jared Franz by securing their first playoff berth since 2010. Led by junior quarterback Brock Koeppel (2,006 total yards, 22 touchdowns), junior receiver Collin Meininger (48 catches, 775 yards, six touchdowns) and a defense that’s limiting opponents to 21.5 points per game, Westosha Central can possibly secure a first-round home game for the WIAA Division 2 playoffs with a defeat of Wilmot. But the Panthers (4-4 overall, 2-4 SLC) certainly won’t go lightly. Wilmot can’t gain automatic eligibility for the playoffs anymore, but defeating a Westosha Central team already bound for the playoffs could give the Panthers a significant boost in any tiebreaker scenarios as the final playoff spots are decided. They have been led all season by senior Marco Falletti, who leads the SLC with 1,049 rushing yards and has rushed for eight touchdowns. After Westosha Central beat Wilmot in 2020 to notch its first non-forfeit victory since 2007 and first overall since 2010 in a rivalry that dates back to 1963, Wilmot got back in the winning column with an impressive 35-14 victory in last season’s finale. The Panthers enter Friday’s matchup with a 43-16 edge all-time in the rivalry.

They don’t get any bigger than this for a regular-season game. For the second year in a row, the undisputed Midwest Classic Conference title will come down to the winner of the game between St. Joseph and Racine Lutheran, this time at Ameche Field. Last season in Week 8 at Racine’s Pritchard Park, the Lancers defeated the Crusaders, 28-7, then secured the outright conference title a week later in the regular-season finale. This time, the game is the regular-season finale, as St. Joseph (8-0 overall) and Racine Lutheran (6-2 overall) both enter with a perfect 6-0 mark in conference play. The Lancers, ranked No. 5 in Division 6 in the latest WisSports.net state coaches poll, are coming off an impressive 53-0 shellacking at Burlington Catholic Central last week. In addition to securing the conference title, a victory Friday would almost certainly lock up a No. 1 seed and three home games for St. Joseph in the WIAA Division 6 playoffs. The Lancers have been totally dominant this season, outscoring their first eight opponents 362-48, an average of 45.3 to 6, with five shutouts. There are many statistical standouts to point to for St. Joseph, but leading the way are junior quarterback Eric Kenesie (1,266 total yards, 21 touchdowns), junior running back Jayden Gordon (1,248 rushing yards, 20 touchdowns) and senior tight end Luke Schuler (497 receiving yards, eight touchdowns).

Bradford, Tremper and Indian Trail will represent Kenosha County, joining Franklin, Oak Creek, Racine Case, Racine Horlick and Racine Park in vying for the SEC boys volleyball title Saturday at Tremper, beginning at 9 a.m. The schools are each looking to head into the WIAA postseason with a conference title, with Indian Trail trying to defend the conference title it won last season on its way to a fourth WIAA State Tournament appearance in seven years.