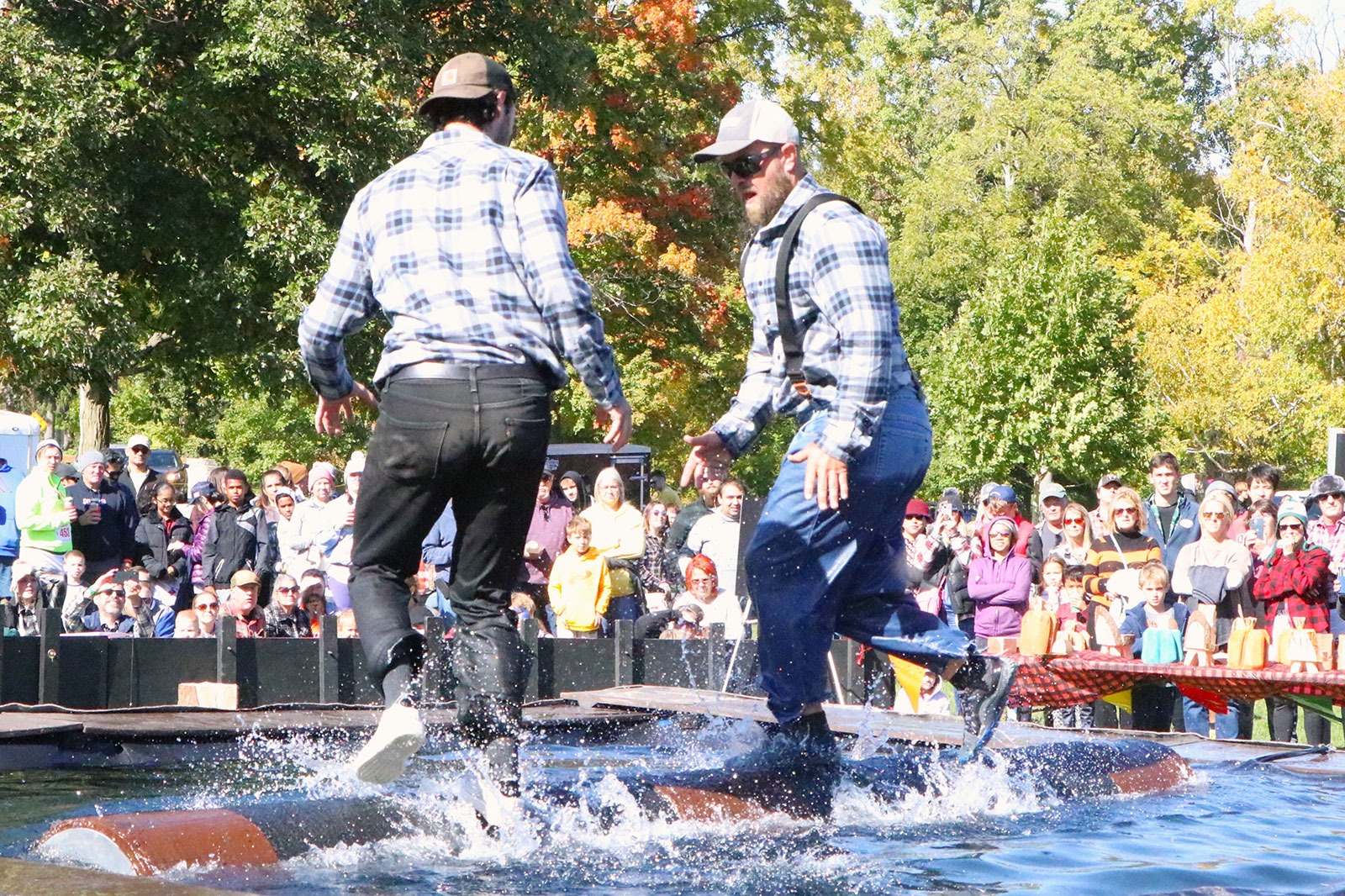 Log rolling was one part of the Paul Bunyan Lumberjack Show during the second annual Flannel Fest Saturday at the Petrifying Springs Biergarten.
PHOTOS: THOMAS CORRAO
Beyond The City, Family

Hello, everyone. Welcome to another edition of Capturing Kenosha. This week, I’d like to give a shoutout to Jockey International for the 2022 Flannel Fest that was held Saturday (Oct. 8) at the Petrifying Springs Biergarten.

The event drew a large crowd that filled every parking area in the park with overflow having to use the UW-Parkside lots. Jockey sponsored the event along with the Kenosha County Parks for a day of fun in the sun for all who attended. The weather was just beautiful with the sun shining and temperatures in the mid-50s, it made for a very enjoyable event.

The day began with the Jockey Undie Run, which benefited the Jockey Being Family Foundation. On grounds, there
were food trucks, a live DJ and bounce houses for the kids. They even held a pet costume contest and a beard contest for the furry-faced gentlemen in the audience.

Many were wearing flannel to get into the spirit of the day.

The highlight of the day, though, was the Paul Bunyan Lumberjack Show.

The thing I liked the most about that show was these men competing to balance on a log that was floating in water. In the contest, two of the lumberjacks would get on a log and begin spinning the log with their feet to knock the other off balance and into the water. I wasn’t sure how they were going to pull this off in a field directly behind the Biergarten, but I was pleasantly surprised when I arrived and saw a portable tank with the log affixed to the
middle to allow the log to spin.

I attended the event with my wife and we were both surprised at the size of the crowd. Everyone was enjoying the
environment along with their kids and their dogs. The Biergarten was booming, and many people were walking around carrying beer steins with their favorite German beers fresh out of the tap.There were at least eight different food trucks offering a variety of food.

At 1 p.m., a burly lumberjack took the microphone and called out, “Yo ho! Yo ho! Who wants to see a lumberjack show!”

The Paul Bunyan Lumberjack Show travels around the country performing lumberjack skills at various events. The lumberjack who addressed the crowd expressed that all the lumberjacks in the show were from Wisconsin and were happy to be performing in their home state.

The show began with an axe-throwing contest. In the contest, the lumberjacks used A two-sided axe with a long handle and threw from about 20 feet into a target that was fashioned out of a slice of wood from a log. There was a technique to throwing the axe and these lumberjacks had it down, sending every throw into the target.

The lumberjacks used comedy to keep the show moving.

The next demonstration was woodcarving with a chainsaw. In the demonstration, one of the lumberjacks carved a rabbit out of a piece of white pine. There was some comedic dialogue going on while the carving was happening, which made the show quite entertaining.

Next came a race between a two-man saw and a chainsaw. To everyone’s amazement the two-man saw won the race over the chainsaw.

Finally came the part of the show that everyone had waited for — the log roll.

The show began with one of the lumberjacks getting out onto the log wearing only his boxer shorts and a flannel shirt. His balance was very good, and he was able to spin the log quite quickly while maintaining his balance on top of the log.

For a bit of comedy, the announcer told him that he needed to be wearing pants, so one of the other lumberjacks handed him a pair of pants, which he put on while spinning the log.

In the last part of this show, the two lumberjacks on the log attempted to spill the other into the water. They did
pretty good for a while until one of them finally lost his balance and wound up getting soaked.

Overall, the lumberjack show was top notch. Everyone in the audience really appreciated them and their
showmanship.

That’s about it for this week’s Capturing Kenosha. Kenosha’s really been quite the happening place this year with all the events that have taken place through the warm-weather months. I think we’re quickly becoming a go-to destination for people to travel to when they’re looking for fun things to do.