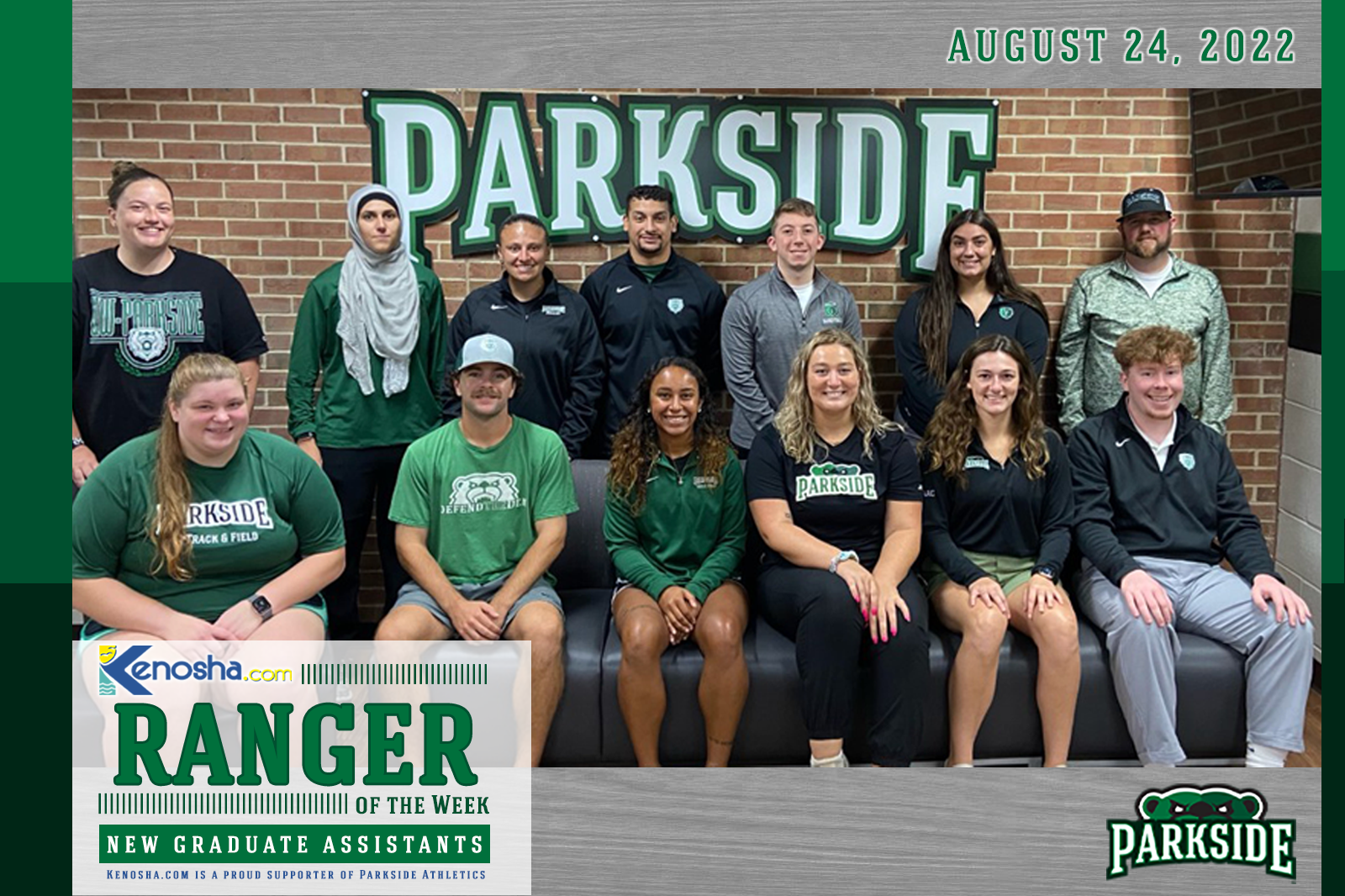 Rangers of the Week: Graduate Assistants

On Aug. 1, the Parkside Athletic department announced the hiring of 13 new graduate assistants.

Dylan Backalar, Andrea Borray Ortiz, Allie Cross, Aaron Cusimano, Micaela Encarnacion, Sundus Ewis, Jordan Fierst, Sara Klemme, Madeleine “Mads” McKenna, Tyler Molloy, Ben Suchon, Santos Villa and Stasha Warchock will assist the athletic department with various responsibilities throughout the year. Each graduate assistant has a unique story which brings them to Parkside, which is why they are all our Kenosha.com Rangers of the Week.

Here is a closer look at each Parkside GA:

Backalar graduated from Ball State University in the spring with a bachelor’s degree in sports administration with minors in coaching and marketing. While at BSU, Backalar served as the head manager for the men’s basketball program. In his four seasons, his duties included breaking down recruit film, opponent defense, statting practice and coordinating team meals and events.

A Farmington Hills, Mich., native, Backalar played high school basketball at Frankel Academy. Since his playing days, he has experience as a coach in AAU basketball with the North Oakland Wolfpack and Indy Heat Red.

Borray Ortiz, who hails from Bogota, Colombia, served as an assistant women’s soccer coach at Highland Community College for one season 2021-2022 after serving as a graduate assistant coach for the women’s soccer program at Concordia University, Nebraska (CUNE) for two seasons from 2019-2021, where she helped the program to win the conference championship in 2020-21. Also, during her time at CUNE, she received her master’s degree in Business Administration.

Prior to her time at CUNE, Borray Ortiz went to Laramie County Community College for her freshman year and then transferred to Ohio Valley University (OVU), where she got her bachelor’s degree in Sports Management with minors in Business, Coaching, and Management.

The Plano, Ill., native played volleyball at Waubonsee Community College from 2018-2020 and went on to earn her bachelor’s degree in Sports Management from UW-Parkside.

During her time at Parkside, she interned with the strategic communications and marketing department from 2020-2022. She was a stadium operations and marketing intern with the Rockford Rivets baseball team of the Northwoods League during the summer of 2021 and returned to the Rivets as a co-head of marketing for the 2022 season.

A native of Hoffman Estates, Ill., Encarnacion graduated from Schaumburg High School in 2017 where she played volleyball and softball for four years. She continued as a dual-sport athlete at Ripon College, playing volleyball and softball and earning bachelor’s degrees in Elementary Education and Exercise Science in 2021 and Sports Management in 2022.

Within the sports industry, Sundus has accumulated experience in several different areas and sports, including being an intern for the Milwaukee Milkmen and Milwaukee Wave, an associate director for a youth baseball and softball organization, and a youth basketball coach at her former school.

A native of Menomonee Falls, Fierst graduated from Sussex Hamilton High School in 2017. Following high school, she attended Roosevelt University, where she graduated with a 4.0 GPA in May of 2020 with bachelor’s degrees in Political Science and Sustainability Studies alongside a minor in International Studies.

Fierst joins the Rangers after previously serving as a women’s basketball graduate assistant coach at Lewis University during the 2021-2022 season. The Flyers advanced to the championship game of the Great Lakes Valley Conference Tournament — eventually falling to Drury, but not before putting together an eight-game winning streak with four wins against top-25 teams. In May of 2022, Fierst was promoted to recruiting coordinator and was responsible for arranging all recruiting operations relevant to the success of the program along with continuing her previous duties as graduate assistant. Prior to her time at Lewis, Fierst made a stop at her alma mater Sussex Hamilton High School as a girls basketball varsity assistant coach during the 2020-2021 season.

At Lawrence, Klemme competed in the shot put, hammer, weight throw, discus and javelin. Klemme had two top 10 performances in her career. She was also co-chair of Lawrence’s chapter of SAAC and involved in many other clubs.

A native of Columbus, Ohio, McKenna graduated in 2017 from Upper Arlington High School. She attended California University of Pennsylvania where she played volleyball, and graduated in the spring of 2021 with a 3.9 GPA and a bachelor’s degree in Psychology. McKenna also spent two semesters at Syracuse University in the Clinical Mental Health Counseling Program prior to transferring to Parkside.

McKenna served as Cal U’s campus Student-Athlete Advisory Committee (SAAC) President from 2018-2021 and as the Pennsylvania State Athletic Conference’s representative on Division II National SAAC from 2019-2022, where she was a member of the Mental Health Task Force and spoke on DII Mental Health Panels at the 2019 and 2020 NCAA Conventions. Since beginning her tenure with DII National SAAC, she has served as the student-athlete representative on Division II Management Council (2020-2022), the NCAA Constitution Committee, and the DII Implementation Committee. McKenna was instrumental in drafting specific mental health language in the new NCAA Constitution. In 2022, she became the first student-athlete to earn the DII CCA Meritorious Service Award in recognition of her service to Division II.

A native of Eagle, Molloy graduated on the honor roll as a two-sport athlete from Palmyra-Eagle High School. Molloy worked as an events & operations intern with Parkside Athletics prior to graduating on the Dean’s List in the spring of 2022 with a B.S. in Sport Management.

Aside from his work with Parkside Athletics, Molloy has experience with the Rockford Rivets of the Northwoods League and has worked with Lacrosse America as well.

Suchon earned his bachelor’s degree from Parkside in the fall of 2017. Prior to his time at Parkside, Suchon spent time working in baseball and softball at various levels. He has been an assistant varsity coach for the Stevens Point Legion, a youth coordinator for the Hitters Baseball Academy, an assistant softball coach at Grinnell College, and a high school scout for the Chicago White Sox.

Suchon will earn his master’s in Positive Coaching and Athletic Leadership from the University of Missouri in December 2022.

A native of Waukegan, Ill., Villa graduated from Northern Illinois University in 2022, earning a bachelor’s degree in Kinesiology.

Warchock is originally from Marquette, Mich., and graduated from Marquette Senior High School in 2018. She then continued her academic and athletic career at Alma College and continued playing basketball. She graduated in the spring of 2022 with a bachelor’s degree in Communications and a minor in Spanish.

During her time at Alma, she served as the Student Athlete Advisory Committee President for the 2021-2022 academic year. Over the course of her four-year career at Alma, Warchock scored 752 points, snagged 299 rebounds and collected 75 steals.