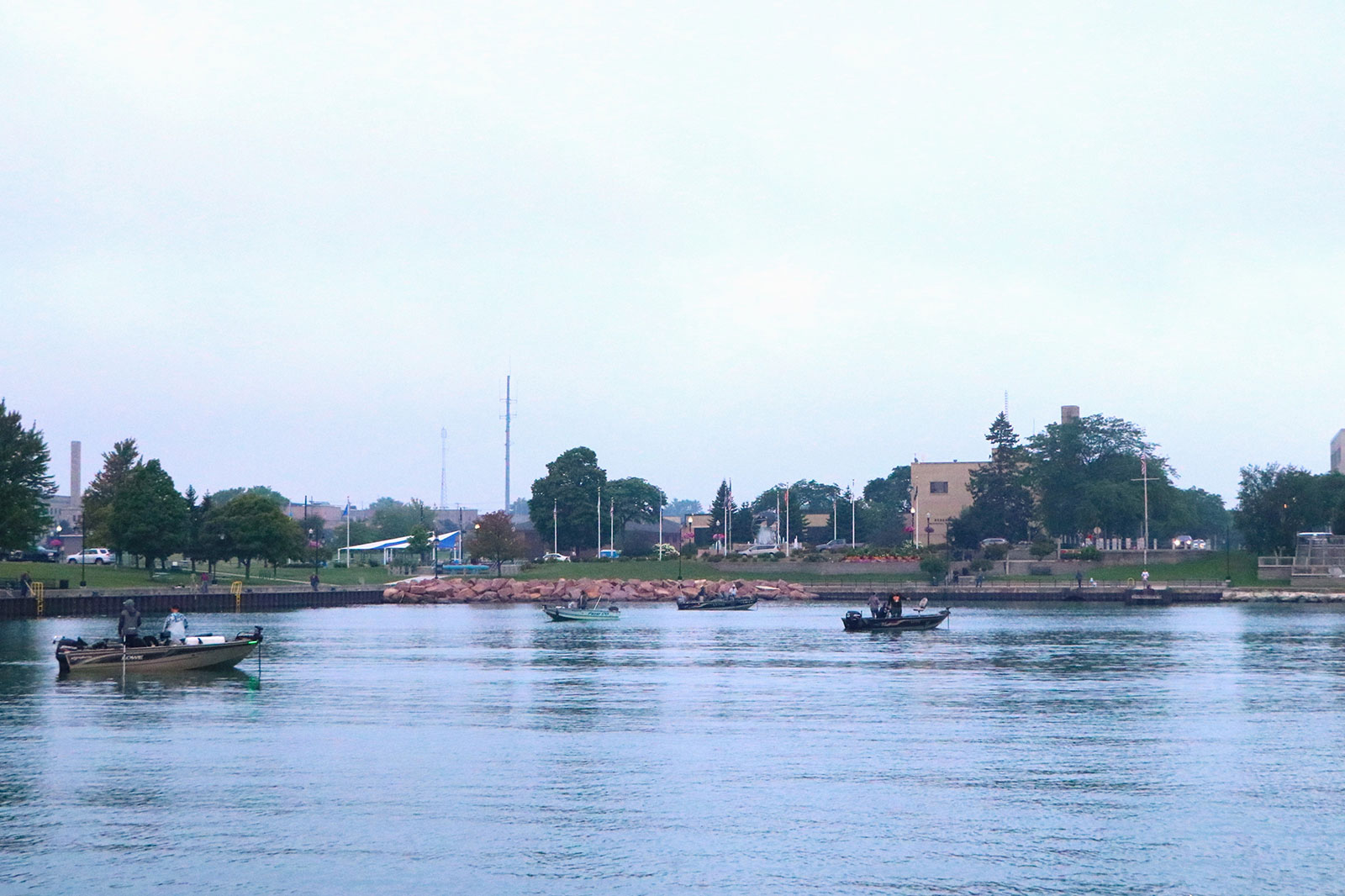 Boats set up in the harbor as fishermen attempt to reel in a king salmon.
PHOTOS: THOMAS CORRAO
Local

With the eyes on the prize, fishermen flock to the Lake Michigan shoreline

Hello, everybody. Welcome to another edition of “Capturing Kenosha.” I happened to stumble upon the topic of this week’s article while taking pictures down by the harbor.

Every Sunday, I put together a Facebook post showcasing what I believe to be my best pictures of the week. While down by the harbor, I saw there was an unusually large contingency of small boats with people fishing.

Normally, it’s not unusual to see charter boats leaving the harbor with eager fishermen hoping to catch a few salmon, or maybe a lake trout, trolling on the lake.

This Sunday was different, though.

These boats appeared to all be anchored in the harbor, so after taking my pictures, I stopped near the Kenosha Yacht Club and got out of the Jeep to look at all the fishermen that lined the harbor. I saw many shore fishermen casting lures hoping to catch a fish.

There were also many small boats, probably in the 14- to 17-foot range, fishing in the center of the harbor near Common Grounds. To my right, I saw a fisherman, John Jacobson, who was patiently casting his lure over and over again. I moved a little closer and asked him what was going on and why were there so many boats fishing within the harbor.

He told me that the king salmon were in the harbor. It was believed to be the beginning of a salmon run — the fish that everyone wanted to catch.

As I stood there talking to Jacobson, he told me that he’s been fishing the harbor for years and that the king salmon run was his favorite time of year to fish the harbor. He told me that he had caught a salmon the prior day but that he hadn’t seen anyone catch a single fish on the day we met.

As soon as he said that, though, the boat that was closest to us in the center of the harbor hooked on to a large fish. The excited fisherman’s pole was bent quite a bit as he tried to reel it in. The second fisherman in the boat excitedly collected the other fishing poles they had out and scrambled to find the fishing net in the bottom of their boat.

Jacobson said that it appeared they were using salmon eggs for bait.

From our vantage point, you could see small orange bobbers on the lines of the poles being taken out of the water. He told me that the salmon he caught the day prior had been a female that was loaded with salmon roe. He said that he hadn’t brought any with him but that he would consider bringing it on his next trip down to the harbor.

It took some time before they were able to get the fish into the boat, but when they did you could see that it was a large male king salmon easily identifiable by its hooked jaws. The pair held up the fish to take a picture of it and to show the other fishermen lining the shores the object of their desires.

I only stayed for a short time after that fish was in the boat, but as I was driving away, I saw another fisherman hook up with another fish not far from where the first fist had been caught. Of course, I stopped quickly and had to get another picture before heading home.

Now, I don’t usually do articles like fishing reports, but I guess there’s a certain excitement in the air when the king salmon are in the harbor because the fish were jumping, and the fishermen were lining the shores in anticipation of catching one of these iconic fish.

If you enjoy catching salmon, I strongly encourage that you consider heading down to the harbor before the fish decide to go somewhere else. Good luck to you all and happy fishing.