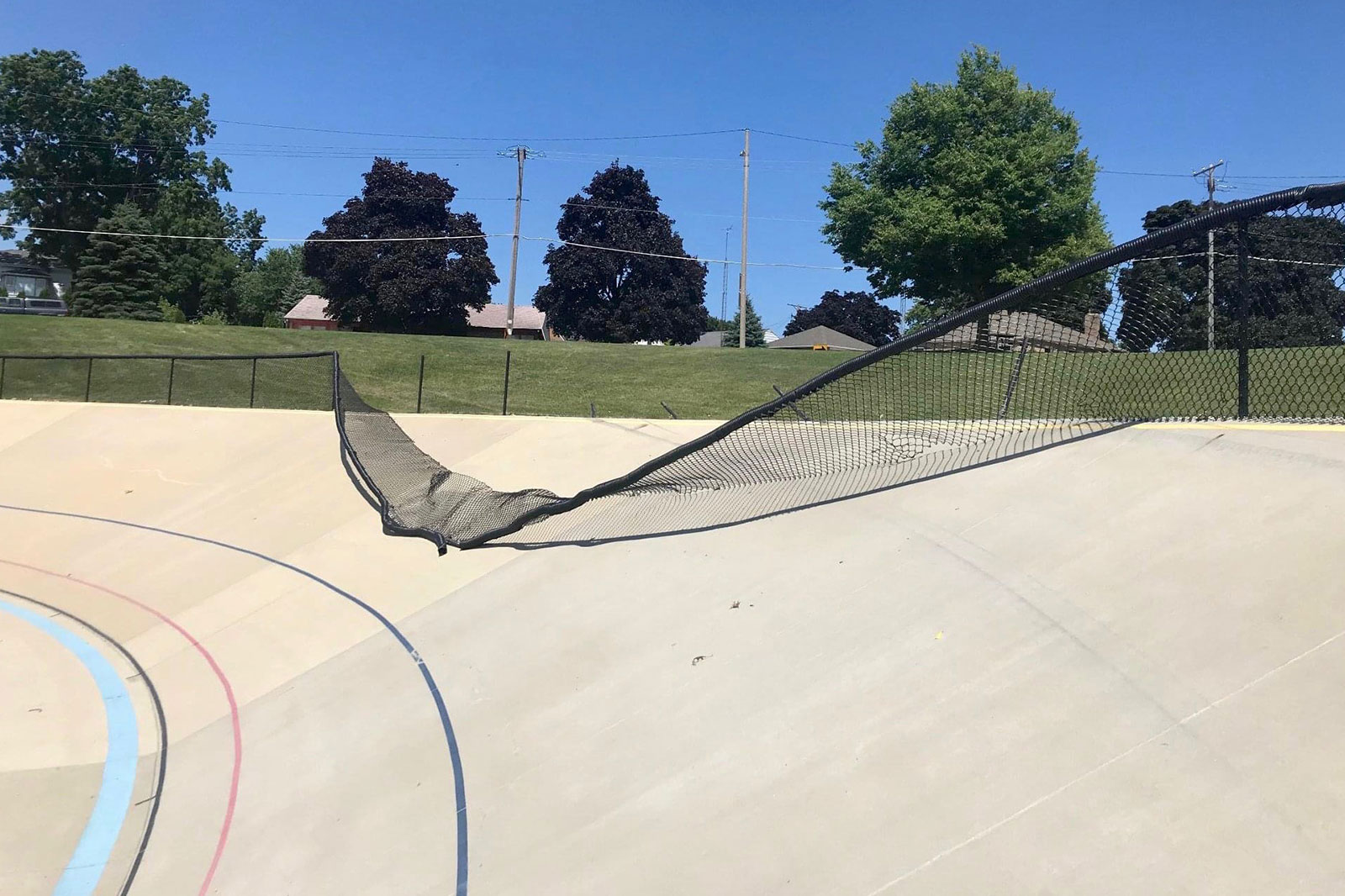 A look at the damage done to a portion of the fence at the Washington Park Velodrome Sunday afternoon.
PHOTO: SUBMITTED PHOTO
News, Local

It’s official: Kenosha’s Velodrome, the oldest in the U.S., has now seen it all

It’s not unusual to see cyclists race at speeds over 40 mph at the Washington Park Velodrome.

A Toyota Camry, not so much.

Behind teamwork from law enforcement, city officials and a local fence company, cyclists enjoyed another week of eventful racing at the nation’s oldest operating velodrome.

On Sunday (July 31), the Velodrome’s weekly slate of racing — if not the entire season — was in jeopardy when significant damage was discovered at the track’s fence between corners three and four.

What happened is almost unthinkable.

A 14-year-old Chicago boy was ticketed for hit and run, reckless driving (endanger safety) and operating without a valid driver’s license after racing a 2007 Toyota Camry four times around the Velodrome, launching up a 28-degree embankment and through a metal fence.

Thanks to a timely tip from a nearby resident, Kenosha Police Department quickly located the damaged vehicle just blocks away in the 3800 block of 18th Avenue.

Kenosha Police said the 17-year-old was driving the car in a nearby parking lot around 2 p.m. Sunday when he let the 14-year-old take over in the driver’s seat. The 14-year-old said the Velodrome looked “intriguing” and drove onto the track.

It is believed to be the first time in the Velodrome’s 95 years a motor vehicle accident took place on the track.

The only remaining evidence of the crash is skid marks between corners three and four, tire tracks running along the grass hillside and a banged up Camry.

“The city’s quick response is 100-percent due to a person letting us know they saw something and reported it,” Nosalik said.

“If you see something, say something. That quick interaction allowed us to identify who was responsible and gather the information. That speeds up the process for the city, who was able to get out there and have it fixed.”

Many area residents and the local cycling community believed a vehicle skidded off Washington Road, went down the hill and crashed through the fence.

Most were shocked to discover it was caused by a vehicle racing around the track.

“It’s (gutsy) for sure,” Velodrome Board Member Robby Gauss said. “I wonder if he Go-Pro’d it.”

Others wondered if the teen is an aspiring NASCAR driver.

“Who knows,” Nosalik said. “If this is any indication of what kind of driver he is, he’s going to have a hard time finding a sponsor.”

The teen will also have a hard time obtaining a future driver’s license, according to Nosalik. The incident is now part of his permanent driving record.

The boy’s parents will likely be held responsible for the repair and replacement costs associated with the incident.

“I think the dad was super embarrassed,” Gauss said. “He talked to the citing cop and stressed his dismay and offered to pay for all of the damages.”