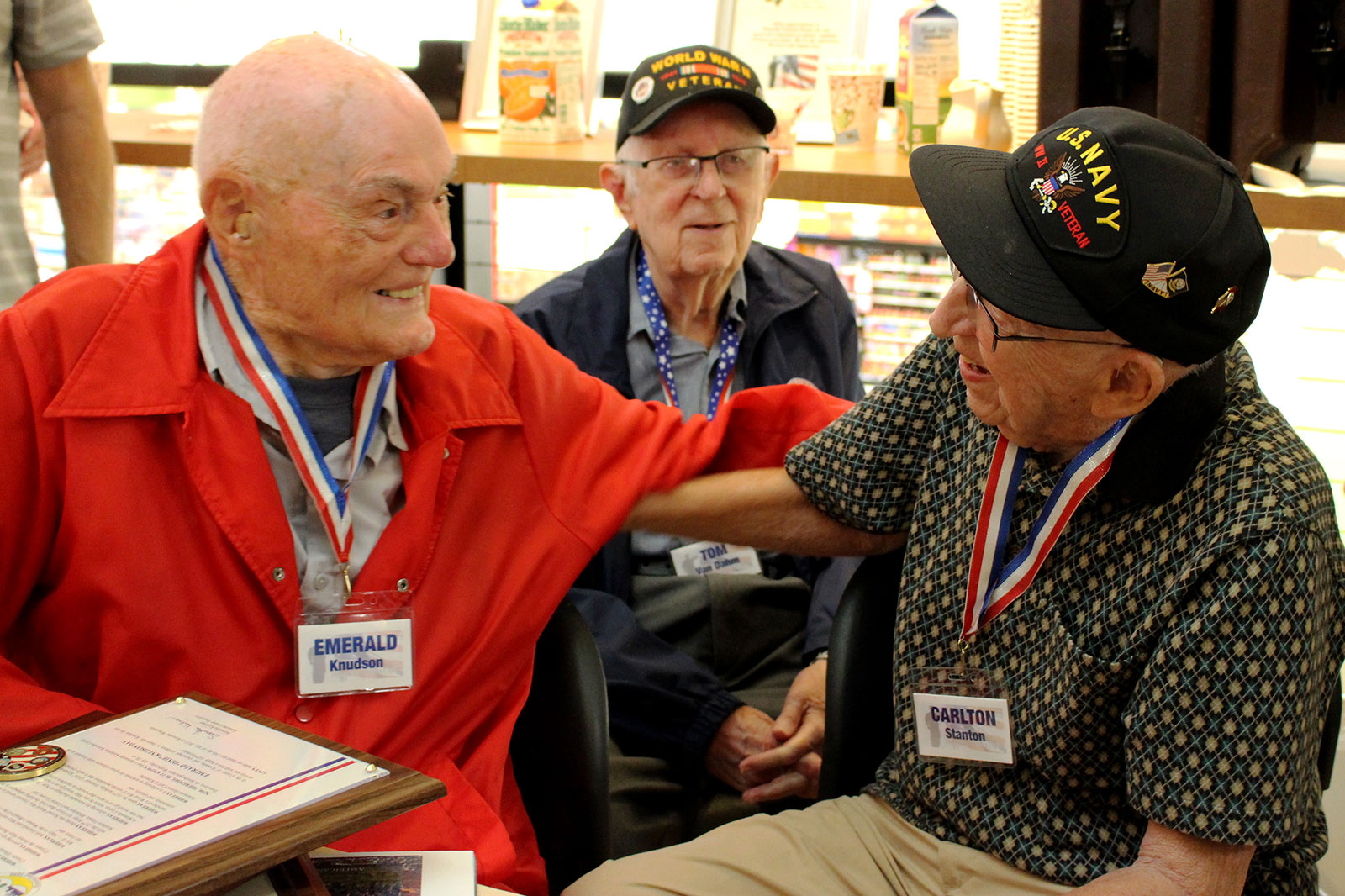 “The luckiest guy in the world.”

Paraphrasing the baseball great Lou Gehrig, that’s how Emerald “Dixie” Knudson describes himself on the eve of turning 102.

A World War II veteran, Knudson was the guest of honor Friday (July 15) at the American Heroes Café at Festival Foods in Kenosha, where a roomful of friends saluted him five days in advance of his birthday.

“Unheard of,” the remarkably spry Knudson said, of the surprise celebration. “Just unbelievably good. And it’s really unnecessary — but I love all of it.”

Born July 20, 1920, in Livingston County, Ill., Knudson moved to Kenosha as a 5-year-old child and grew up across the street from his future wife of 72 years, Mary Bielewicz.

Knudson would spend most of his life in Kenosha County — first in the city and then for many years on his farm in Pleasant Prairie — minus the nearly three years he spent fighting in World War II as a member of the U.S. Army Air Corps.

Stationed in North Africa and then at various locales across the European theatre, Knudson was a photographer whose job it was to operate cameras in bombers, to document exactly where the bombs fell.

“If it was a good bombing raid, it was fine; everybody was happy with me,” Knudson recalls. “If they missed the target, they just raised hell with me because I was wrong — the bombs went out there, the target’s over here.”

After Germany’s surrender, Knudson’s unit was sent back to the United States, outfitted with new aircraft, and then redeployed to Japan. After just a short stay there, Japan surrendered.

“All the soldiers were out getting drunk, getting happy and this and that,” he said. “The MPs were out there, ‘Get back in camp, get back in camp.’ That’s a lot of baloney — that’s not gonna happen. That was pretty much the gist of it.”

And thus was the conclusion of Knudson’s military service. Honorably discharged Sept. 28, 1945, Knudson returned to Kenosha and reconnected with Mary, who herself was serving in the Women’s Branch of the U.S. Navy. A proposal and a wedding followed, and then four children — including two who would go on to serve their country in the Army.

Knudson, now widowed, lives with his youngest son, David, who will retire later this year after 39 years in the Army. They traveled together from David’s home in Terre Haute, Ind., to attend Friday’s celebration in Kenosha.

“This is amazing to be here, and it’s good for him,” David said.

“You are a member of what is truly the Greatest Generation,” said Kerkman, who declared July 20 as Emerald “Dixie” Knudson Day in Kenosha County. “It is an honor to celebrate this great day with you.”

About that Lou Gehrig parallel, Knudson explains it like this.

“I don’t know if you ever saw the movie with Lou Gehrig, when he retired, his body was turning, he couldn’t move anymore, and he said, ‘I’m the luckiest guy in the world,’ Knudson said. “And I think to myself, ‘Lou, move over; there’s another guy standing right beside you.’ And I am. It’s incredible. The friends I’ve made, people who have looked after me all my life, it’s just unbelievable.”