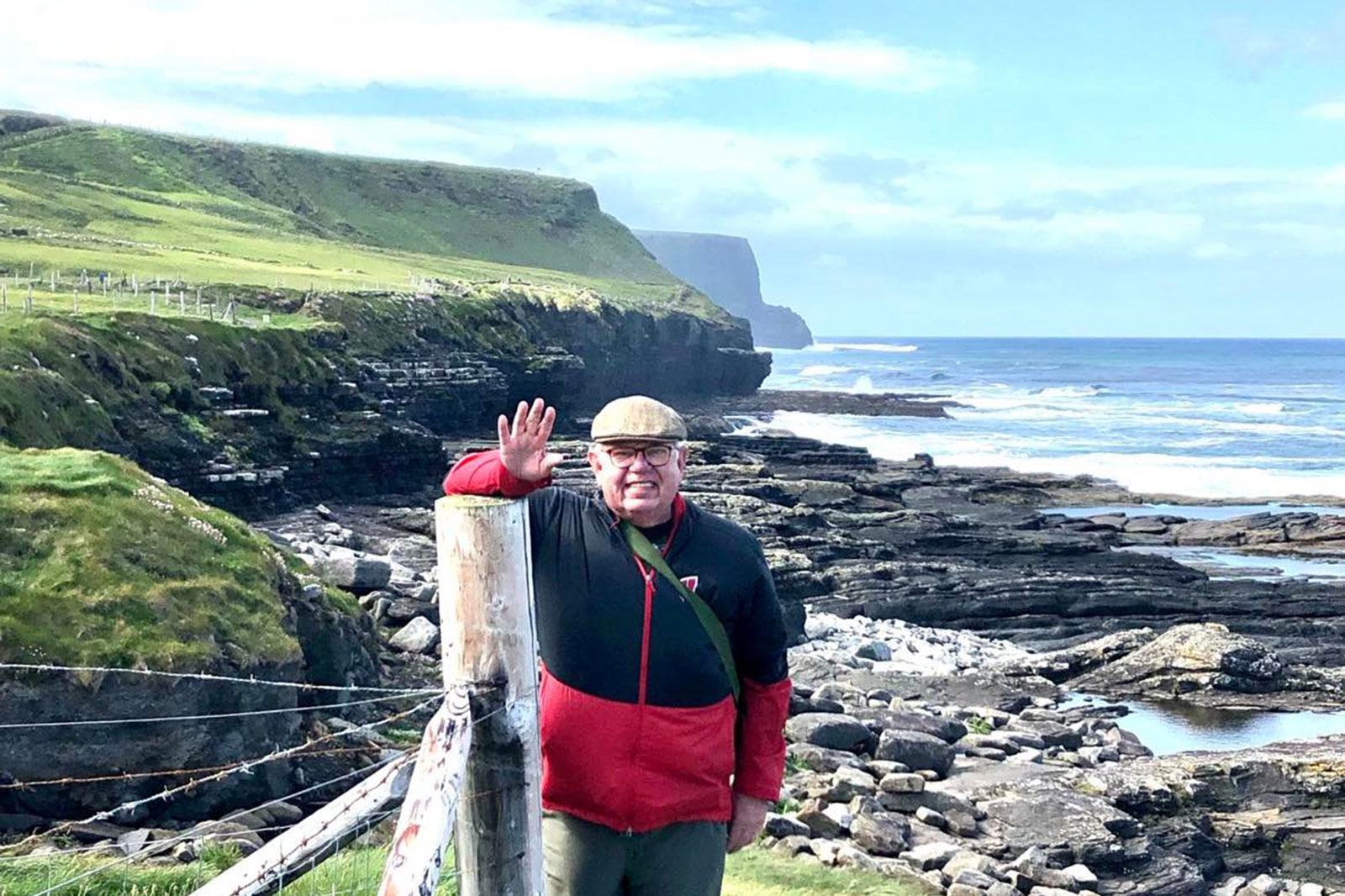 John Collins hiking the Cliffs of Moher on a recent trip to Ireland.
PHOTOS: SUBMITTED PHOTOS
Beyond The City, Travel

Kenoshan finds no shortage of good ‘craic’ in Ireland

In the middle of Ireland’s Highway M18 near the Shannon Airport, stands a hawthorn tree. Nothing much to look at. It resembles a random and overgrown bush. But it is always pointed out to tourists.

The tree is a “fairy tree” and in the 1990s changed the planned path of this major Irish road. Highway engineers had deemed their chosen path the most efficient. However, local folklorists objected to the desecration of this shrub because it was believed to be a magical gathering place for clans of “fairies” — spirits that bring luck or misfortune.

A debate ensued. The County Council sided with the fairy believers and the road was re-routed around the tree. This at a cost of millions and a 10-year delay. Non-believers were unhappy and after the road was opened, someone took an axe to the tree leaving only splinters. But alas, the next spring brought new growth and the bush in its renewed glory still graces the roadside.

The Irish tell stories of leprechauns and fairies with a wink and twinkle in the eye — especially to tourists. But the tree grew back so who knows?

This mystical spirit continues as you feel the ghosts of the past while walking through the tombs of stone age people who inhabited the island before the Egyptians built the pyramids. The Poulnabrone dolmen still stands erect in the moonscape of the Burren where ancient burials took place 5,000 years ago. That sense of history carries over to churchyards filled with Celtic crosses. Every little town seems to have a of medieval castle built to protect against the frequent invasions of the era. Those fortifications along with the inhospitality of the shoreline should have kept the Normans, Vikings and Spaniards at bay. But for hundreds of years, invaders had their way and brought with them civilizations that combined to define Ireland.

Imposing cliffs rise out of the Atlantic Ocean to form the Cliffs of Moher and the Cliffs of Kilkee. Along those dramatic landscapes are hiking paths. Some small portions of the paths are paved but most of the way is gravel or dirt. The trails have a dramatic drop off into the North Atlantic on one side and fences on the other to keep neighboring cattle from going into the briny deep. Between is the trail. It can be treacherous. It can also be exhilarating.

The Irish tourism folks came up with a name for this stretch of landscape on Ireland’s western shore — “The Wild Atlantic Way.” That description pretty much wraps up the views one gets in County Clare where we spent our time between Doolin on the coast and Ennis, a half hour inland. Both claim to be centers of traditional Irish music and both would be correct.

Doolin is a tiny fishing village that sits on the intersection of Galway Bay and the Atlantic Ocean. It is now a popular tourist destination, but still functions as a fishing port providing seafood for area restaurants. Daily boat excursions leave the Doolin Pier taking tourists to the remote Aran Islands. We were able to take such a trip on a windy Atlantic Day and got a ride like one at Great America. As we bounced about on roiling seas for a half hour, we could only imagine the voyages our ancestors took on small wooden sailboats in the 1600s.

The real magic in Ireland doesn’t come from the fairies, the graves of the ancients, the beautiful landscapes or the stories of medieval royal plots but from the music and fun that happens every night in the pubs of County Claire. As you step along the walkways, you can hear music wafting out the doorways. Step inside, pull up a stool and enjoy the craic.

Craic is pronounced “crack” and translates roughly as having a good time with friends. If you pop into an Irish pub and say “I’m looking for some good crack” you’ll start an entirely different conversation that if you do that in Chicago.

From the iconic Gus O’Conner’s in Doolin to any one of a dozen small pubs in Ennis music flows like water.

These music sessions involve one or two paid musicians and whoever else shows up to join in the fun. Usually there will be a fiddler or two, a couple of squeezeboxes (small accordions), an Irish flute or two, at least one bodhran (Irish drum) and if you’re lucky an Irish piper (uilleann pipes). These pipes are native to Ireland and have no relationship to the Highland pipes played in St. Patrick’s Day parades. Uillean pipes are played sitting down — problematic in a parade.

If you are lucky, you may venture into a small-town pub with a peat fire in a fireplace, fresh Guinness on tap and locals to chat with.

Depending on the venue, you may have a meal along with the music. But forget about corned beef. Never saw it on an Irish menu. Make way for the fish.

Ireland has some of the finest seafood in the world. It’s an island after all. Every menu at every restaurant has seafood chowder. Salmon, mussels and various fishes are as common on Irish menus as mostaccioli is at a Kenosha wedding.

Wash all that down with a Guinness and tune into a session of traditional Irish music. Enjoy the experience with friends that came with you and friends met along the way.

It’s all grand and it’s all good craic.