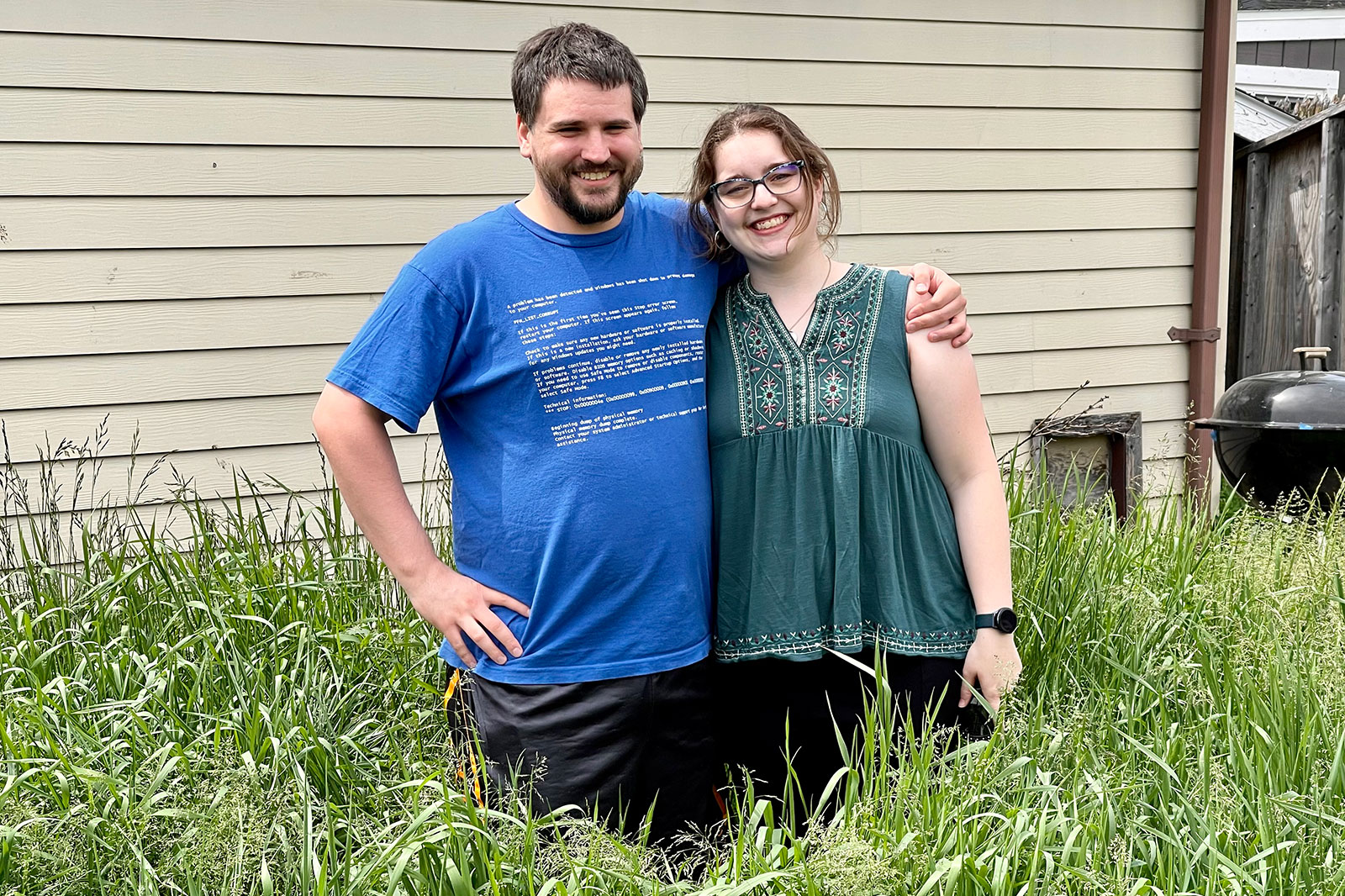 Kenosha.com announces winner in No Mow May contest

Standing in a sea of three-foot grass, Christina Moffett was half-joking when she said her new backyard prairie was thick enough to lose a small child.

It was mostly accurate.

The Kenosha native was one of many local residents who participated in a nationwide No Mow May movement, which was adopted to delay spring mowing and create a pollinator-friendly yard for bees and attract a variety of birds and butterflies.

For their month-long dedication and impressive display, Kenosha.com presented the Moffett family — Christina, her husband Alex and their hedgehog Magnus — with a free mowing courtesy of Prairie Ridge Lawn Service.

“I thought it was really fun,” said Christina Moffett, a local speech and language pathologist. “I would love to someday have total prairie grass. I liked the front yard a lot.”

Alex Moffett said he also enjoyed watching his yard transform over the past six weeks. The 2009 Christian Life School graduate was especially relieved he wouldn’t have to lift a finger for the free mowing.

“That will be nice,” Alex Moffett said. “Our last couple weeks of April were kind of jam-packed. Once we found out about No Mow May, we thought it would be a shame to cut it the day before it started.”

The mowing service was a relief to the Moffetts and good timing for city officials to remind local property owners of the local ordinance requiring proper yard maintenance.

Grass can not exceed eight inches in the city of Kenosha. There is nothing written into the ordinance allowing exemption for No Mow May, according to City Administrator John Morrissey.

“We have several of these a day coming in,” Morrissey said. “We’re getting all sorts of complaints from people upset their neighbors aren’t cutting their grass.”

The Moffetts inserted a No Mow May sign in their front yard, alerting neighbors they were participating in a month-long environmental initiative.

“I put the sign in the yard just in case people wondered what we were doing,” Christina Moffett said. “Most of our neighbors were really cool about it.”

Morrissey said his inspectors became tired of hearing the same No Mow May excuse from local property owners not maintaining their yards.

Until a resolution is passed to change city ordinance, No Mow May will remain an unacceptable reason to forego mowing.

Property owners can receive a seven-day notice to mow their lawn. A $72 inspection fee and a two-day warning is then issued, followed by a $90 fine. The property owner is then responsible for the cost of mowing — provided by a city contractor — in addition to a $100 administrative fee.

Morrissey said he would consider a proposal to set aside areas in city parks designated to allow prairie landscaping and attract pollinators.

“I don’t know that No Mow May works in a city setting,” Morrissey said. “It has to be more thought out than someone putting it out there on social media and saying this is a great thing to do.”