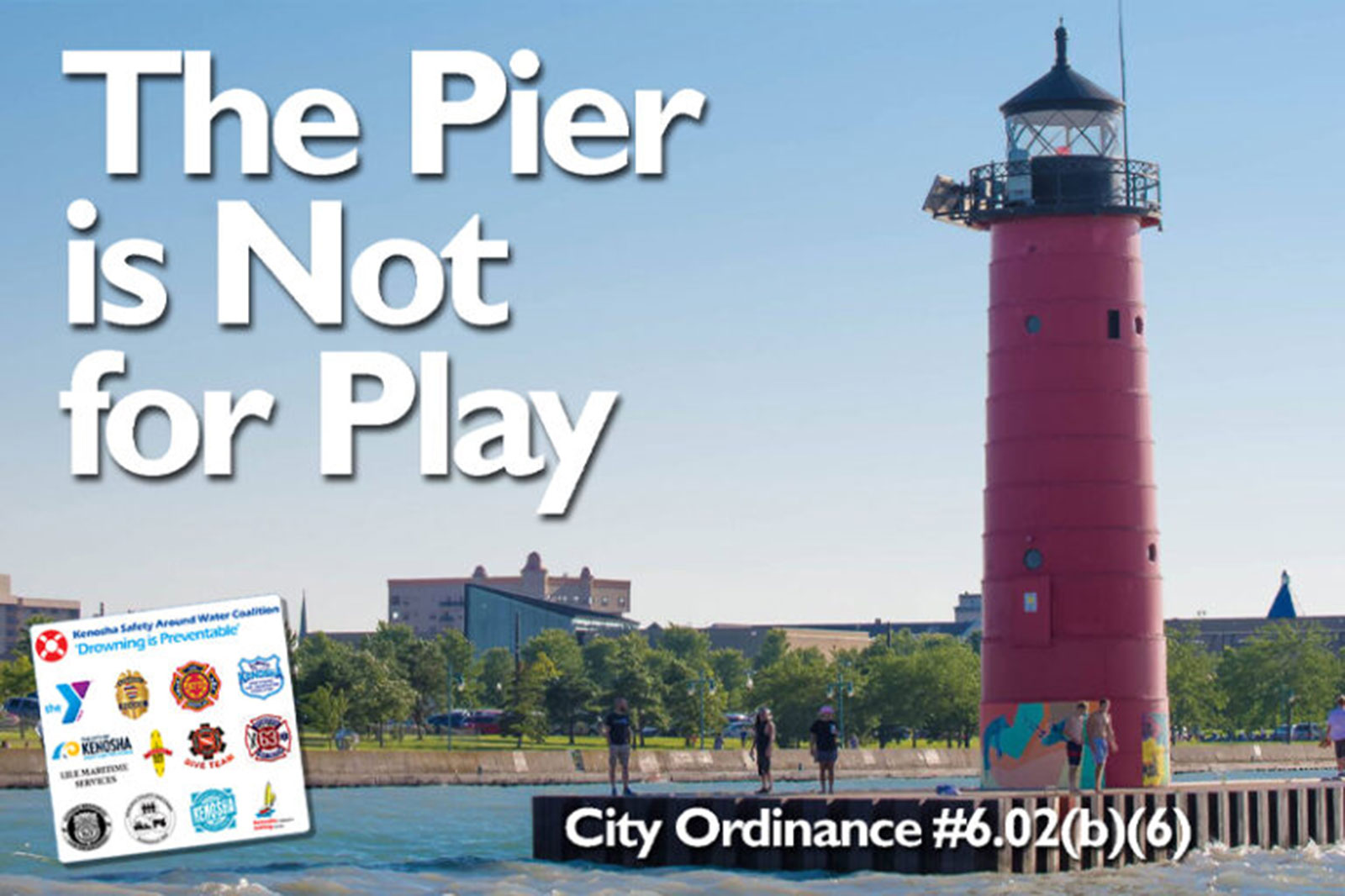 For over 90 years the Kenosha YMCA has been focused on providing community programs that strengthen our city. From the state of the art fitness center to aquatics, sports leagues and even licensed childcare, the Y leads the way in providing affordable programs for everyone from youth to seniors.

May is Safety Around Water month and in order to keep the residents of our community safe, Kenosha passed Kenosha City Ordinance #6.02(b)(6) states that no person should be in the water within 50 feet in any direction of the pier; this includes jumping off of the pier.

There has been considerable effort to create awareness of the dangers of jumping off the pier and the currents found in Lake Michigan. The city has installed permanent signs on the pier warning visitors about the dangers of jumping into the water and strong underwater currents. Also, in order to help facilitate the enforcement of the ordinance, the pier and lighthouse are patrolled by numerous agencies including the Kenosha Police Department and the fine for
swimming within 50 feet of North Pier is $1000.00.

Due to its location and construction, the pier is affected by several types of currents with the most common being longshore and structural.

Structural currents often occur at man made structures such as piers. These currents are the result of longshore currents hitting the structure and are deflected lakeward – away from the shore. The combination of the longshore current pushing towards the pier, and the structural current moving lakeward creates a washing machine effect, moving the swimmer from one dangerous current to another. These currents can exceed 5 miles per hour, which does not seem fast, however, the average swimmer swims only 2 miles per hour. When caught in a structural current, there is no easy escape route.

The water is a great place to be, especially in the summer months. However, it is important to take the time to be knowledgeable about where you are swimming and be as safe as possible so the summer can go swimmingly.

The Kenosha Safety Around Water Coalition meets monthly and works together to raise awareness around issues of water safety. Our mission is to create a culture of healthy respect and safe enjoyment of water in the Kenosha area through education and advocacy. Our current focus is Lake Michigan Safety. Our goal is to change the culture by educating students, parents and the general community that jumping from the pier and swimming in Pike River and Pike Creek is dangerous and life threatening. The Kenosha YMCA has hosted a monthly Safety Around Water Coalition meeting, made up of community members from all sectors, to keep the focus on raising water safety awareness year-round. Members of the coalition include representatives from the Kenosha YMCA, City of Kenosha Fire Department, City of Kenosha Police Department, City of Kenosha Aldermen, Village of Somers, Great Lakes Surf Rescue Project, Kenosha County, Carthage College and concerned citizens.