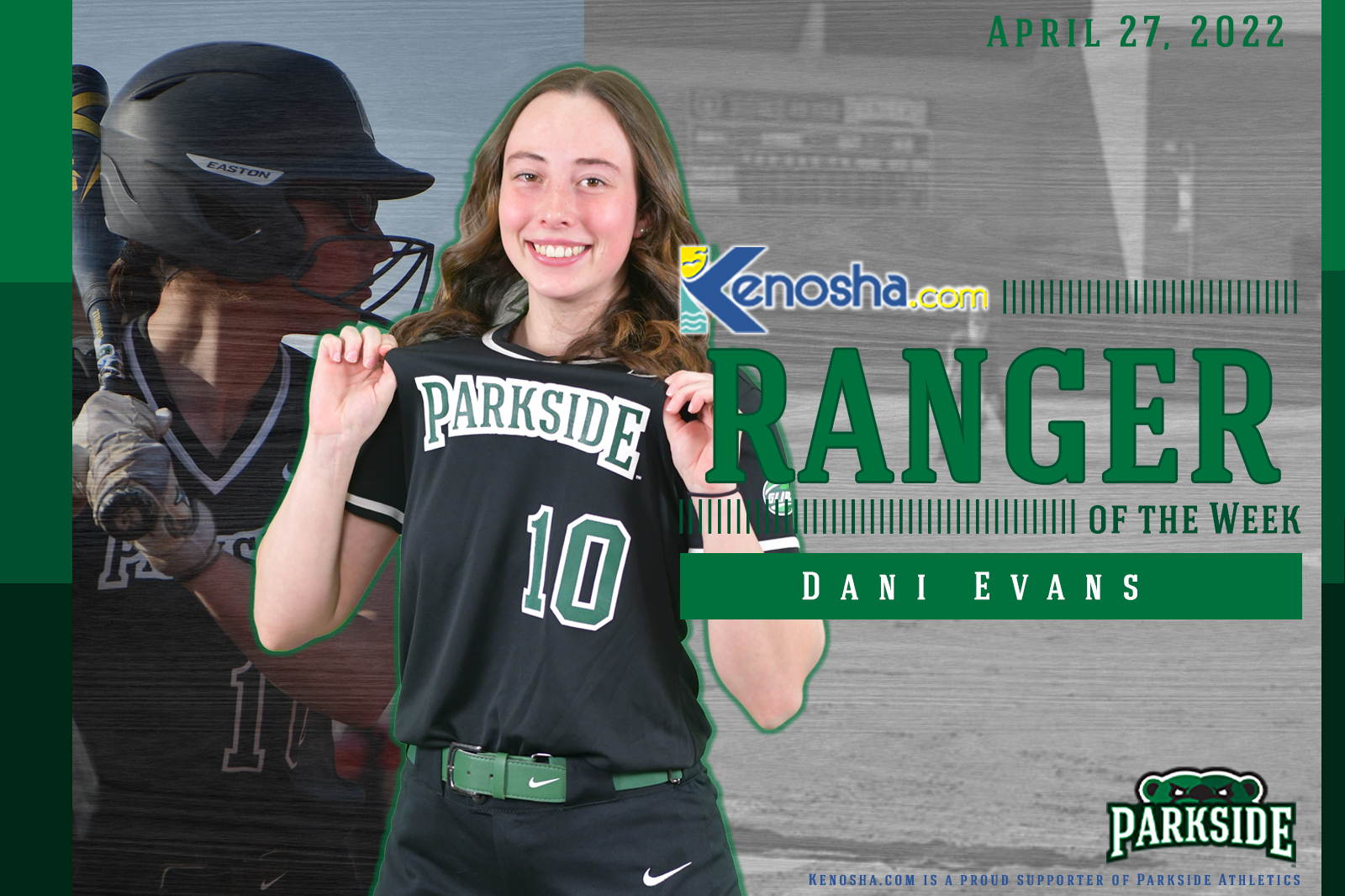 Ranger of the Week: Dani Evans

Last weekend, the Parkside softball team witnessed something happen in a game that hasn’t been done since the 2013 season — a Parkside batter hitting three home runs in a single day. Accomplishing that impressive feat was junior Dani Evans, who is this week’s Kenosha.com Ranger of the Week.

Swing for the fences

Evans’ big day came on Sunday against Ferris State. In the Great Lakes Intercollegiate Athletic Conference doubleheader, she finished 3-for-7 with three home runs and four RBI. The last Parkside player to hit three home runs in a single day was Alexis Simone in 2013 against St. Joseph’s. In the bottom of the seventh inning of Game 2, it was clear that Evans had earned the respect of the Ferris State pitching staff, as she was intentionally walked with the winning run on second base. Not surprisingly, the crowd booed as everyone wanted to see Evans’ chance at a walk-off home run.

Evans, who hails from Plano, Ill., is no stranger to the long ball either; she hit home runs in her first two at bats of the 2021 season at the Rosemont Dome and had three home runs in a two-day stretch to open the season. While her power numbers have been down in 2022, the potential is always there with Evans at the plate. She was second on the team in home runs last year behind All-Region honoree Megan Aliverti. Evans hit four home runs in her final 10 games of the season before suffering an injury that forced her to miss the final 10 games, but she’s back and ready to make some noise in the 2022 GLIAC Tournament.

Evans credits her family for helping get her into softball and says she has loved the game ever since she started T-ball. She remembers going to her father Vince’s slowpitch games growing up and watching him play center field, the same position she plays for the Rangers. To this day, he still throws her front toss before or after games to get some extra work in. Her mother, Pam, has always been her number one supporter, always willing to jump in and play catch with her daughter as well, even though she didn’t play softball growing up. Dani’s brother, Tim, also grew up playing baseball.

Not only does Evans enjoy giving the fans plenty of home run balls, but she’s also looking to give back to the community after her time at UW-Parkside by becoming a counselor for young kids in underprivileged areas. She’s studying criminal justice and sociology at Parkside and is looking to graduate in the spring of 2023.

Parkside softball will be at home for the final time during the 2022 season this weekend. They welcome in Davenport on Friday (April 29) at 1/3 p.m. at Case Softball Complex and then Grand Valley State on Saturday at noon/2 p.m.

Also home this weekend is the Parkside baseball team, who welcomes in Northwood for a four-game GLIAC series at historic Simmons Field starting on Friday.