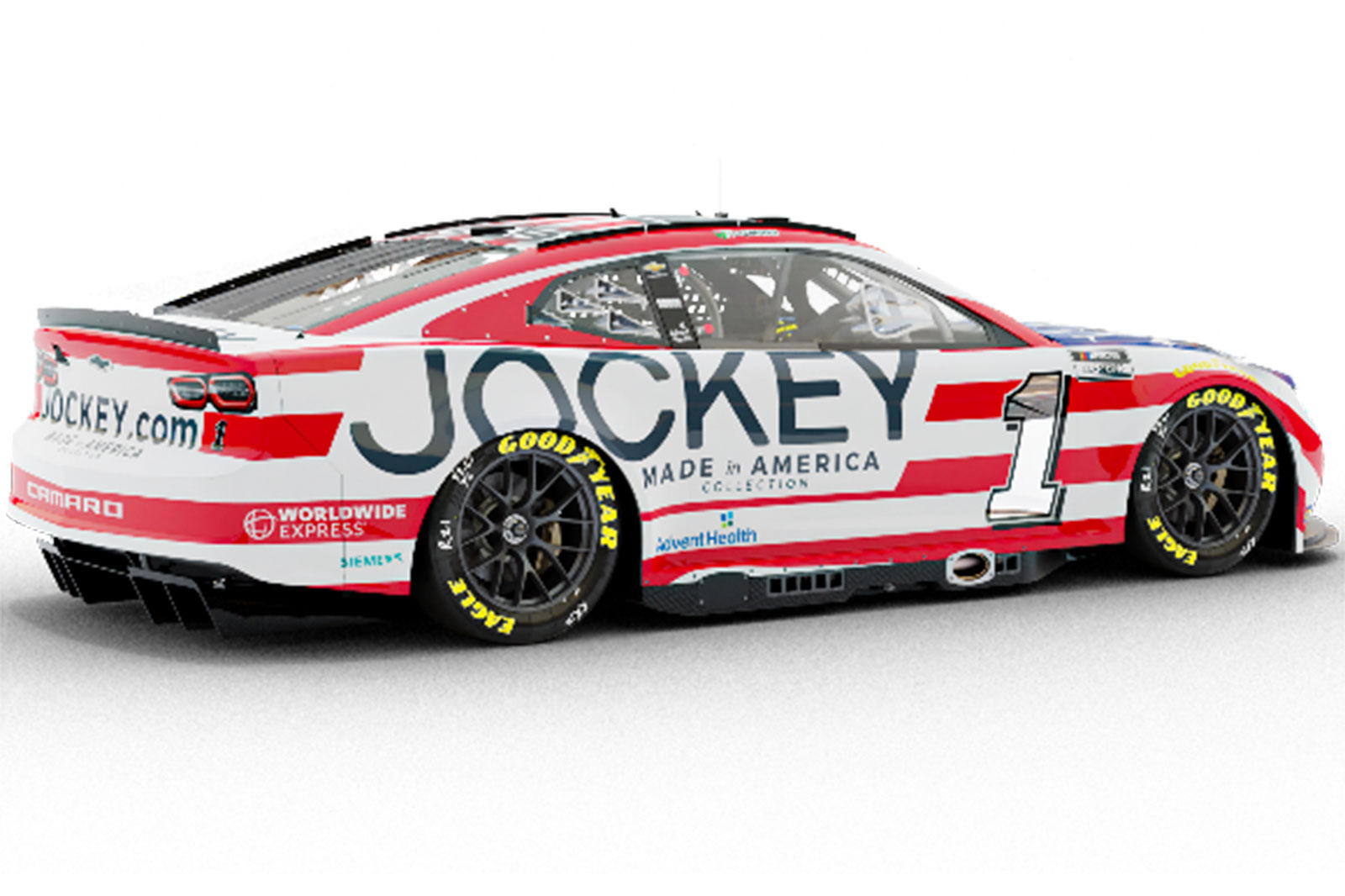 Founded in 1876, Jockey International, Inc. is a privately held, family-owned company with global headquarters in Kenosha. Started by Rev. Samuel T. Cooper as a sock company to serve lumberjacks of the day, the company has expanded into one of the most well-known apparel brands around the world.

There’s a good reason why Trackhouse Racing drivers look comfortable at the front of the NASCAR Cup Series field in 2022.

Not only are their Chevrolets fast, but they are about to lead the field in style.

Trackhouse Racing announced that Jockey International, the pioneer of comfort and quality in active, casual and underwear, has signed a multi-year agreement to be the primary sponsor on both NASCAR Cup Series Chevrolets driven by Ross Chastain and Daniel Suárez.

The Jockey partnership with Trackhouse will be the first such team sponsorship in the 146-year history of the apparel brand. At the core of the partnership will be the launch of the brand’s new Made in America Collection – an effort aimed at delivering premium quality product; reshoring American manufacturing jobs; supporting families in local communities; and providing a more sustainable option for American consumers.

“The ‘fit’ between Jockey and Trackhouse was evident from the start,” said Chris Smith, chief brand officer and EVP, International. “There is a shared vision in delivering a high-quality, innovative product to consumers and in pushing boundaries by being a leader in our respective categories. Both organizations also share a dedication to community, and that’s really what drew us together. We are excited to partner with Trackhouse Racing and introduce the Jockey ‘Made in America’ Collection to more race fans across the country.”

The Jockey paint scheme will be on full display Tuesday during a test session at Charlotte Motor Speedway on Chastain’s No. 1 Chevrolet.

﻿Jockey will appear four times in 2022 as the primary sponsor of Chastain’s No. 1 Chevrolet and twice on Suárez’s No. 99 Chevrolet. Both drivers will also carry Jockey logos on their uniforms in every race and be a part of the Jockey® Made in America advertising and promotional campaigns.

“Part of the Trackhouse mission was to attract and represent national brands with similar values, so it is an honor to partner with an iconic American staple like Jockey,” said Trackhouse founder and owner Justin Marks. “Jockey brands are synonymous with innovation and quality, and they are great tellers of the American story. We are excited to become a part of their history, as Jockey is becoming a part of ours.”

Chastain said he is looking forward to joining with Jockey.

“Jockey is a family-owned company that has been around for generations, and as an eighth-generation watermelon farmer I can appreciate how hard it is to maintain their lead spot as an innovator of quality products,” said Chastain. “I am proud to represent Jockey and help tell their great American story.”

Trackhouse Racing is in its second season in the Cup Series. Florida native Chastain gave the organization its first victory on March 27 at Circuit of the Americas in Austin, Texas. Both he and Suárez, the Cup Series’ only Mexican driver and former Xfinity Series champion, have contended for victory at several races this season.

Jockey is also the presenting sponsor of the NASCAR Cup Series race at Road America on July 3. This year’s race will be known as The Kwik Trip 250 presented by Jockey® Made in America Collection.

“Comfort is important inside and outside of the car and I am so proud Jockey is coming on board with Trackhouse,” said Suárez. “New companies in the sport tell new stories and attract new fans. It is always an honor to be of a part of new program and I can’t wait to see all of the cool marketing around this program.”