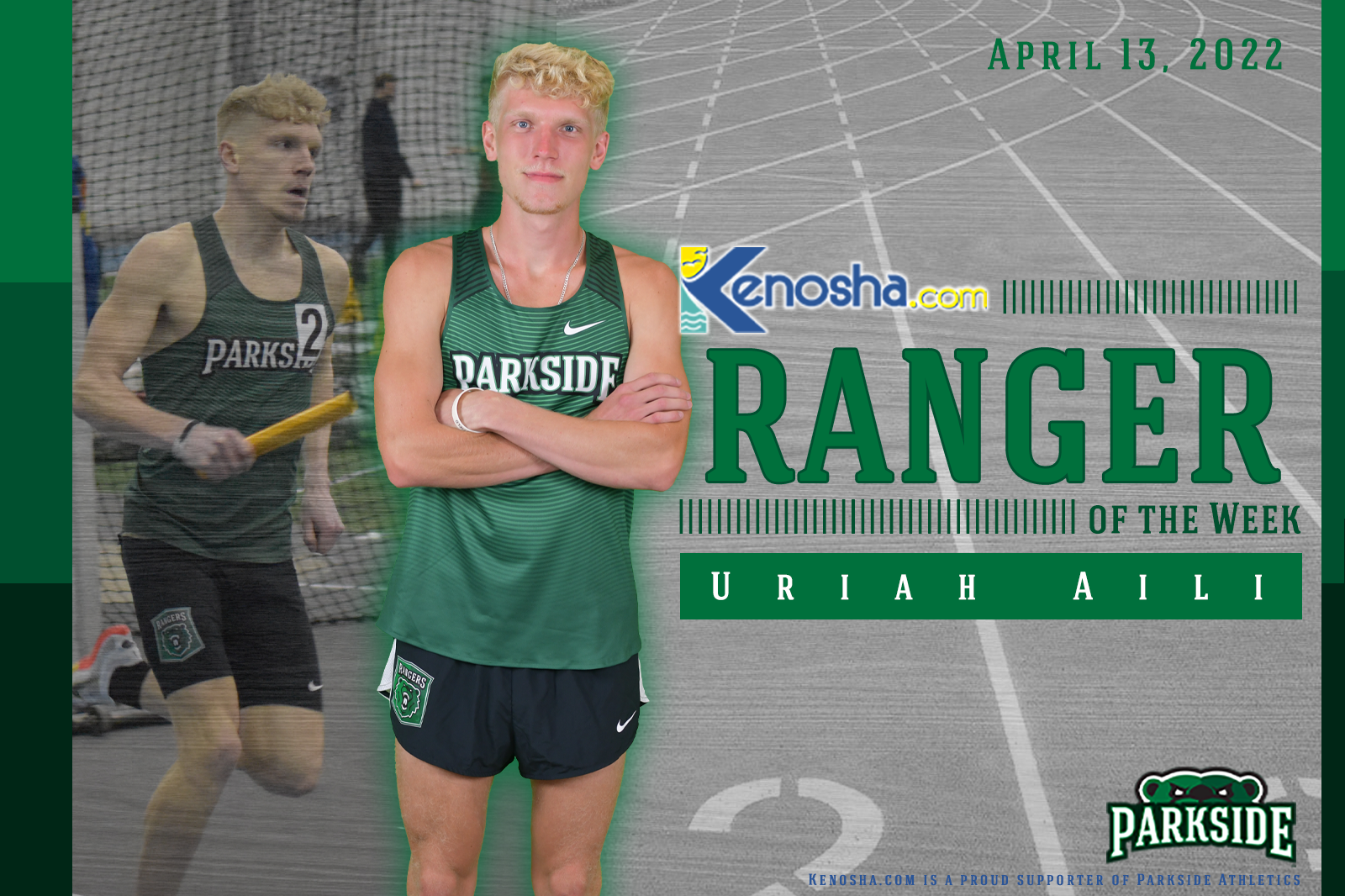 Ranger of the Week: Uriah Aili

Transfer opens the outdoor season with wins in the 800 and 1,500 at Marquette

The Parkside track & field team opened its season at the Marquette Invitational on Sunday, April 10. The Rangers had a solid day, placing second on the men’s side and third on the women’s side. Helping lead the way on the men’s side was Uriah Aili, this week’s Kenosha.com Ranger of the Week.

Aili (pronounced Ay-Lie), is a redshirt sophomore from Ironwood, Mich. He is a Sports Management major who hopes to coach cross country and track & field at the NCAA Division I or Division II level after college. Aili had a strong start to the 2022 outdoor season, winning both the 800-meter run (1:58.29) and the 1,500-meter run (4:01.40). In the 1,500, Aili pulled ahead in a windy race to beat Marquette’s Cade Ferron. Aili later went on to lead teammates Sean Waldvogel and Tommy Martin to a 1-2-3 finish in the 800.

Aili started his collegiate career at Holy Family College in Manitowoc. Due to the COVID-19 pandemic, Holy Family was forced to close its doors in the summer of 2020, leaving Aili without a school, and without a track team. Aili’s coach at Holy Family had previously met Parkside assistant coach Carly Fehler at a coaching conference, and reached out to Fehler as he felt that Aili might be a good fit at Parkside. Aili soon found himself on the phone with Parkside head coach Nick Maas, and felt connected right away and knew that Parkside was the place for him.

Why he chose to run

Aili credits his brother, Isaiah, for getting him into running.

“Growing up, he was always faster than me,” Aili said. “I got tired of losing to him, so I started to train harder.”

Isaiah Aili is currently serving his country as an Army Ranger and is stationed in Georgia. He previously held the record for the fastest 800-meter time in the Upper Peninsula of Michigan.

“I’ve never actually beat him in an in-person race,” Uriah added. “But I broke his records, so I guess that means something.”

Uriah currently holds the Upper Peninsula record for the 800, mile and two-mile.

The Parkside track & field team is headed to California to compete in the Cal State LA Twilight Open and the Azusa Pacific Bryan Clay Invitational Thursday and Friday (April 14-15).

Join the Parkside baseball team this weekend as they take on Missouri S&T at historic Simmons Field on Friday and Saturday (April 15-16) for doubleheaders starting at noon. Bring your furry friends out to cheer on the Rangers for Bark in the Park. All dogs must be on a leash. Please check ParksideRangers.com for updated schedule and ticketing information.