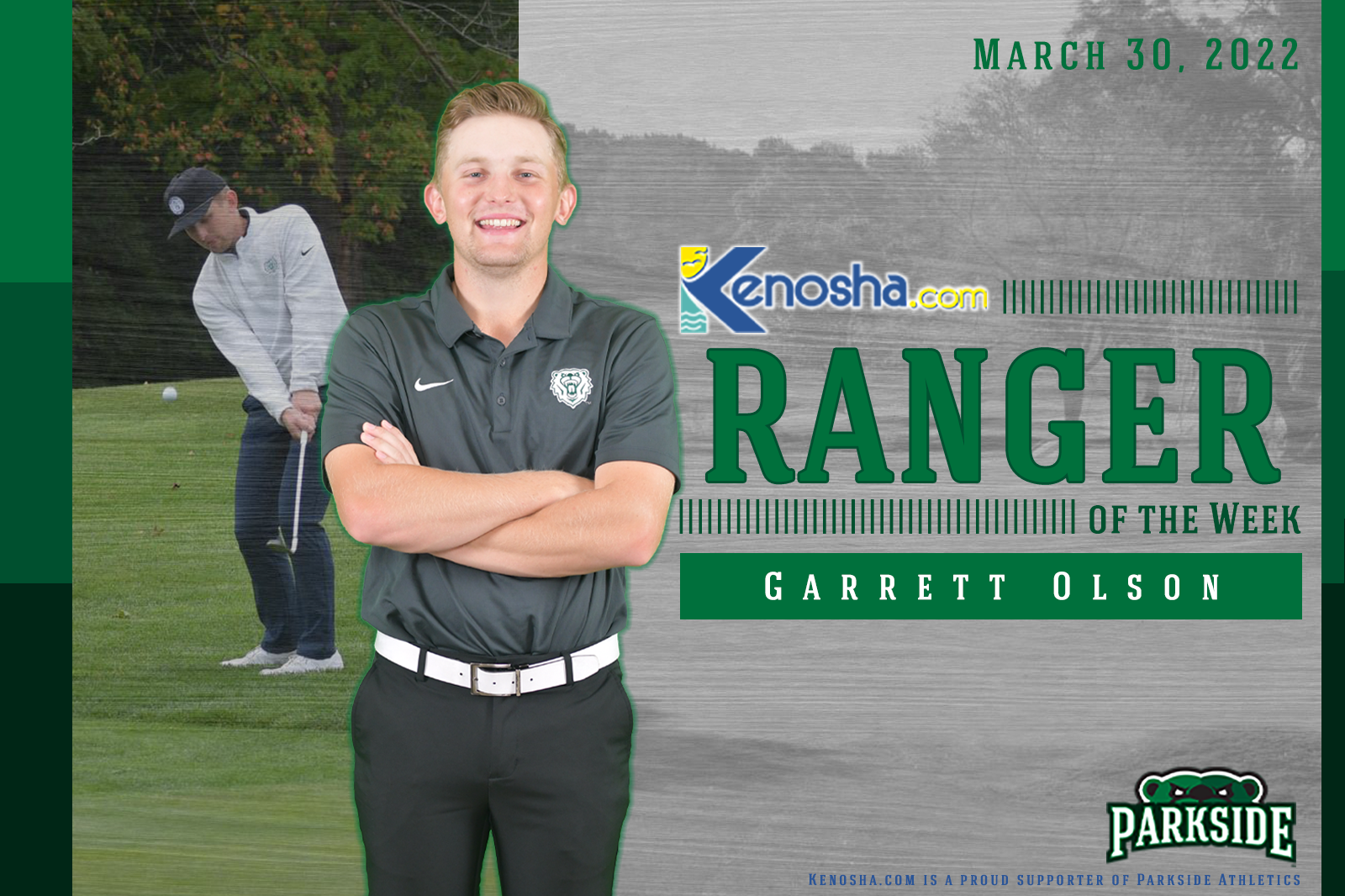 Ranger of the Week: Garrett Olson

Garrett Olson was born in Peoria, Arizona, with a childhood full of baseball until he fell in love with his most accomplished pastime, golf.

Olson recently led the Parkside golf team to its second win of the 2021-22 season in Perry Park, Kentucky. The Rangers counted on the sophomore to deliver on back-to-back days in order secure another team win for a very young squad. Going low in tournaments is nothing new for Olson, who earned Great Lakes Intercollegiate Athletic Conference Newcomer of the Year honors as a freshman last season and is now this week’s Kenosha.com Ranger of the Week.

While the team went on a 10-day road trip to Kentucky to compete in two events, Olson led the team in both events. Shooting 79-72 at the SVSU Spring Invite at Kearney Hill Golf Links, which was his lowest two round score in a tournament this season. Following a strong showing in Lexington, Olson led his team once again in Perry Park, Kentucky, shooting 75-77 and finishing in a tie for third.

“The team battled through some cold weather this past weekend,” Olson said, “and this win will help our confidence leading into the end of the season.”

Now on the tee, the Olsons

Following Olson’s successful freshman year at Parkside, his younger brother and only sibling, Tanner Olson, decided to team up with his brother at Parkside. Both Olsons graduated from Mountain Ridge High School in Peoria, Ariz., where they competed on the school’s baseball and golf teams. Garrett reached the high school state tournament twice, finishing in the top-20 his senior year. Meanwhile, Tanner reached the state tournament once and finished tied for 25th.

Prior to playing golf, the brothers were prominent baseball players for their high school and travel teams. In Garrett’s sophomore and junior years, Mountain Ridge reached the state baseball tournament and made it to the semifinal and championship games.

“It’s always fun to have your brother competing alongside you,” Garrett said about playing with his younger brother at Parkside. “We push each other to get better on the course and in the classroom.”

Up next for Garrett

Garrett will continue to improve on his game and in the classroom as he plans on graduating with a double major in Business Finance and Marketing. After Parkside, he hopes to work in finance or real estate.

Olson will be competing for the Rangers in their next event at the Dan Salisbury Memorial hosted by Illinois-Springfield April 4-5. The Parkside men’s golf team will then round out its season April 15-17 at the GLIAC Championships in Augusta, Mich.

Upcoming events for the Rangers

The men’s and women’s track and field teams kick off the outdoor season at the Benedictine Invite Saturday (April 2) in Lisle, Ill.

Parkside softball hosts doubleheaders at the Case Softball Complex against Saginaw Valley State on Saturday (April 2) and Wayne State on Sunday (April 3). Admission is free, so come on out and cheer on your Rangers!