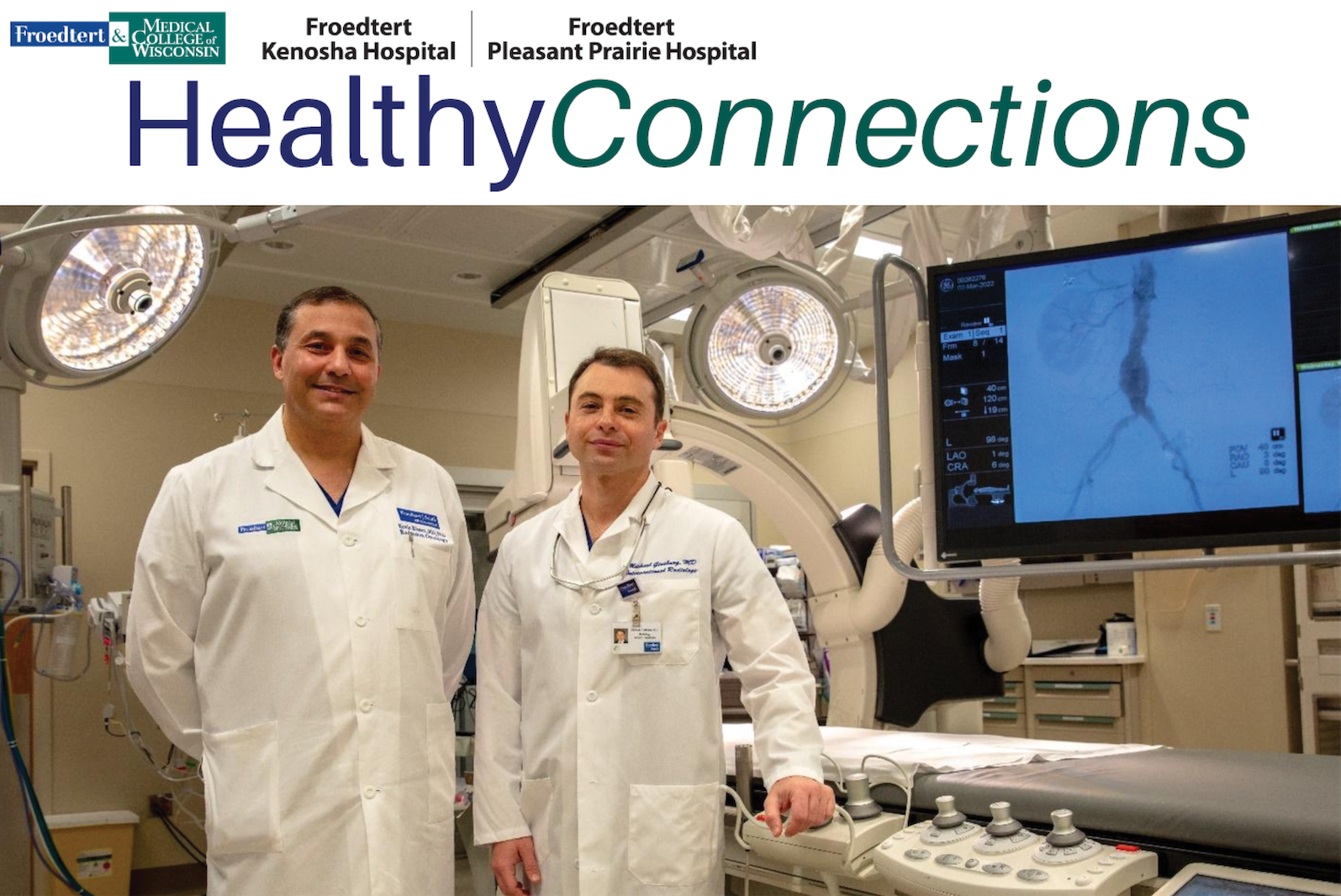 Interventional radiology and radiation oncology are teaming up!

Five months after Robert Houte’s ambulance ride, he and his wife Judy celebrated their 50th wedding anniversary. They credit that celebration to the outstanding doctors and care that Robert received close to home at Froedtert South.

Judy recently thought her husband of 49 years, Robert, might not ever walk again let alone be shoveling snow. Robert had fallen, hurt his leg, and was unable to stand up. His leg was not broken, and with no prior symptoms or injuries, Robert and Judy had no idea what could be so terribly wrong with his leg. Robert’s pain was unbearable. Subsequently, Robert experienced his first ambulance ride.

Doctors confirmed that Robert had a large inoperable tumor on his pelvic bones causing excruciating pain and hindering his movement. Physicians quickly assembled to coordinate Robert’s care and become the team he calls, “the most important in my life.”

“Dr. Ginsburg (Interventional Radiology), Dr. Khater (Radiation Oncology), and Dr. Ahmed (Oncology), along with their teams, wasted no time in caring for me,” said Robert. “They prescribed special treatment for me, and Dr. Khater and Dr. Ginsburg worked together to reduce my pain.”

Robert’s fall and injured leg directly resulted in the discovery of his tumor. “We’re glad he fell,” said Judy. “That saved his life, and we made the right decision to go to Froedtert South.”

Bone is a major site of hematogenous tumor cell spread (originating in or carried by the blood) in renal (kidney) cancer. Many patients with cancer will develop painful and functionally disabling bone metastases (secondary sites of malignant growth) at advanced disease stages. According to Dr. Ginsburg, the overall prognosis of these patients, while curable in select cases, is generally poor and therefore treatment is focused on pain reduction.

Pain affects quality of life. Pain is the most common complaint from patients with skeletal metastases. In addition, fractures, decreased mobility, depression, and anxiety from this disease impact quality of life. Current data support a multimodal management strategy which can improve quality of life and survival. The evidence-based teaming-up of therapies is how Froedtert South approached Robert’s care.

“Recognizing that Mr. Houte had an inoperable large metastatic tumor that spread to his left pelvic bones causing debilitating pain and reducing ambulation, Dr. Khater, Dr. Ahmed, and I had a clear understanding that adequate pain therapy was critical for his treatment, while maximizing the chances for him to be able to walk again and be a candidate for further therapies,” stated Dr. Ginsburg. “That required us to join our skill sets in reducing the tumor in his pelvis while substantially improving quality of life.”

“They did an excellent job telling us the pros and cons of cryoablation and explaining everything,” said Robert and Judy almost simultaneously. “We knew we were in good hands right here. The hospital is up-to-date, the physicians and nurses have exceptional bedside manner, and the staff was very friendly and helpful,” said Robert.

Image-guided cryoablation has become a common approach for the palliative treatment of painful metastatic bone lesions. Cryoablation (a process that uses extreme cold to destroy tissue) can be a valuable alternative to surgery in select patients with kidney cancer. In Robert’s case, Dr. Ginsburg explained, “Our minimally invasive embolization procedure resulted in the devascularization of the tumor, which allowed us to minimize the risk of bleeding and potentiated the cryoablation ablative kill zone.”

In Robert’s words, “By the end of the procedure I could raise my leg. It was really a good day! They made my life much better. My quality of life improved greatly.” Robert is grateful to be alive, live pain-free, walk on his own, and he’s even grateful when he gets to shovel his driveway.

Froedtert South’s approach to patient care includes combining targeted therapies, such as Interventional Radiation and Radiation Oncology, to allow for patient milestones like Robert’s that weren’t seen before. With collaborative efforts and a multi-disciplinary focus, physicians are drawn to be part of this unique environment. Dr. Khater and Dr. Ginsburg are excited about the teaming up of their specialties so that they can help patients in the community in more meaningful ways.

“We are both able to take the symptoms of the patient and correlate it with the imaging,” said Dr. Khater. “That’s a lost art. We are not just treating an isolated spot. We look at what’s causing the trouble and determine how we are going to best help the patient.”

Dr. Kevin Khater, a self-proclaimed math nerd, will say with a big smile that Radiation Oncology is very calculated and he truly enjoys his work. The former college football player and married father of three has been at Froedtert South for nine years. He enjoys the high quality of colleagues that this facility attracts and the resulting teamwork he gets to be part of. Dr. Khater says, “Patients can tell that this is a guy that loves being here.”

“Radiation Oncology and Interventional Radiology form a natural partnership because both utilize image-guided therapy that is fundamentally different from surgery. We can dive deeply into what is going on with the patient, with more nuanced understanding and 21st century technology. Collaboration enhances this process further. All of us want to help the patient achieve the best possible outcome,” said Dr. Ginsburg.

Born in Ukraine and raised in Israel, Dr. Michael Ginsburg moved to the United States to pursue his dream of becoming a physician. He was interested in every field of medicine, but he chose the exciting specialty of Interventional Radiology to treat diseases in minimally invasive ways previously requiring surgery. He has been at Froedtert South for 3 years and enjoys living in the area with his wife and son.

Together, this team can impactfully treat the growing number of patients that are living longer with metastatic disease. Dr. Khater explained, “Sometimes, tumors are right next to critical pieces of normal anatomy such as the spinal cord. Dr. Ginsburg can cut off the blood supply to the tumor, shrink it, and pull it away from the spine, thereby allowing for safer delivery of radiation. Another example is the radiation risk on the rectum for a patient undergoing prostate cancer treatments. Dr. Ginsburg is able to skillfully place SpaceOAR hydrogel (a jello-like substance) and expand the space between the prostate and rectum pushing the two pieces of anatomy apart.”

Minimally invasive and targeted treatments, such as the ones that Interventional Radiology and Radiation Oncology collaborate on, demonstrate the breakthrough care being provided right here in Southeastern Wisconsin. Froedtert South offers virtually everything a large, metropolitan, academic hospital does with the time-saving addition of an easy-access location and convenient parking.

Five months after Robert’s ambulance ride, he and Judy celebrated their 50th wedding anniversary. They credit that celebration to the outstanding doctors and care that Robert received close to home.

“It was very encouraging that we knew the doctors were talking with each other,” said Judy. “We had such confidence in how the physicians and staff were handling Robert’s life and coordinating his care.”