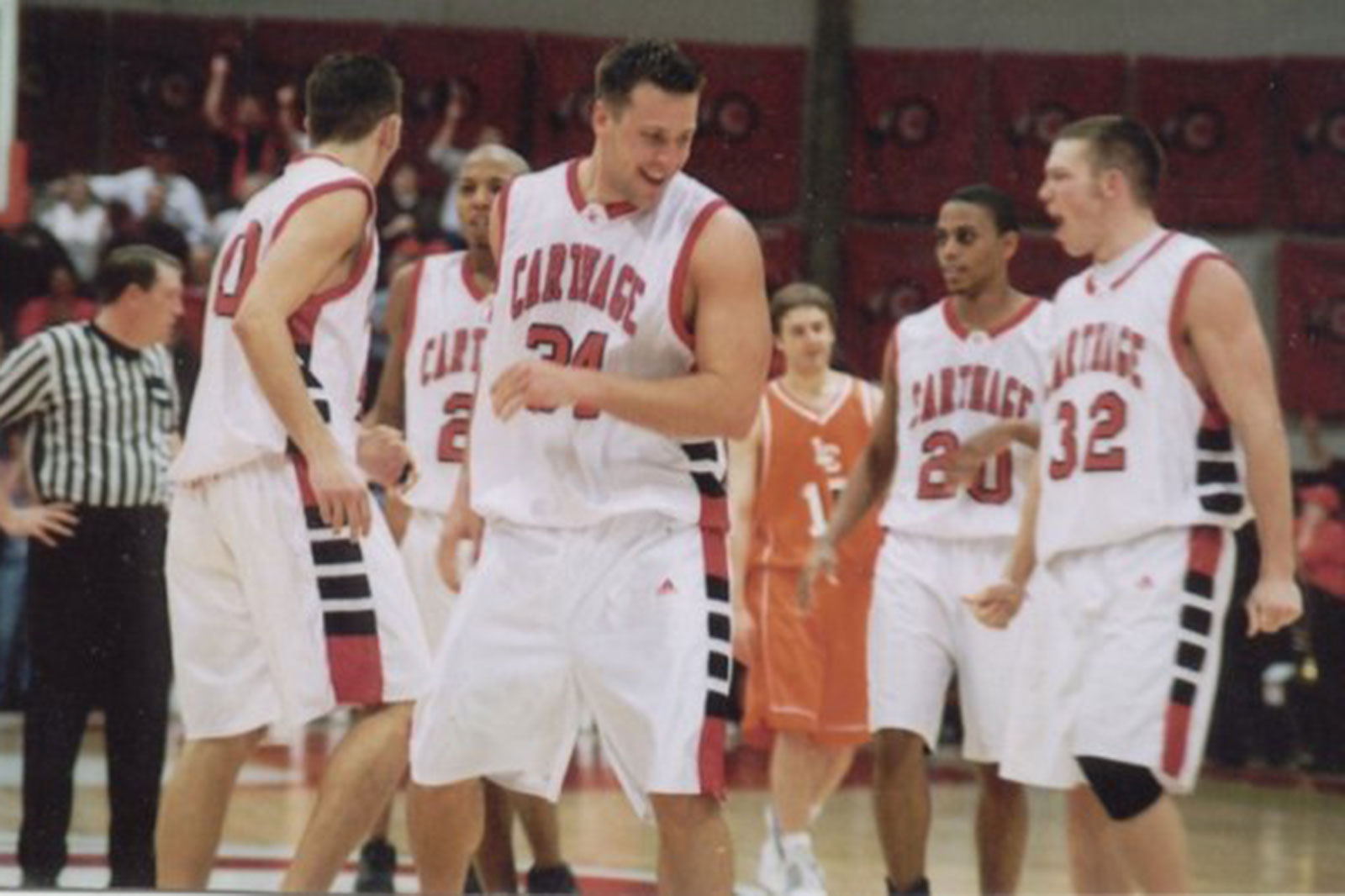 Twenty years ago, the Carthage Red Men made a run to the Final Four

On this date (March 16) in 2002, the Carthage College men’s basketball team completed the greatest season in the 116-year history of the program.

Twenty years ago today, the then-nicknamed Red Men concluded their only trip to the NCAA Division III Final Four with a 72-51 win over Rochester (N.Y.) in the third-place game in Salem, Va. The conquest came a day after Carthage fell to eventual national champion Otterbein (Ohio) 70-66 in a semifinal.

This run was the zenith of Carthage’s dominance of the early 2000s when the program gained national respect and quite a following by winning three College Conference of Illinois and Wisconsin titles and at least 20 games a season in a four-year stretch.

“Carthage basketball was special in Kenosha. The fans were the best anywhere! Home games were packed, and we often outnumbered the home fans on the road. We had big turnouts (the previous season) for the second week (of the NCAA Tournament) at Ada, Ohio, and a wonderful contingent made the trip to Salem for the Final Four.”

Djurickovic’s crew cruised into Salem with a 27-1 record and a CCIW title in hand.

“It all comes down to the players,” said Djurickovic, who credited university president Dr. Gregory Campbell, athletic director Bob Bonn and his staff of Tim Bernero, Dave Roehl and Earl Trice as contributors to the program’s success.

“Everyone remembers our star three, Jason Wiertel, Rob Garnes, and Antoine McDaniel, and they should. Jason and Rob are two of only eight four-time first team All-CCIW players. Jason and Antoine were also selected as Player of the Year in our great conference (Wiertel won in 2000).”

The Red Men arrived at the Final Four on a roll.

Carthage’s first trip to the Final Four got off to a promising start in the March 15 semifinal against Otterbein.

Except for a brief tie, Carthage held the lead for the rest of the first half and led 40-36 at the break.

The second half started much like the first with a Carthage burst. The Red Men scored the first four points of the half on two Wiertel free throws and a McDaniel jumper to take an eight-point lead with 19:17 to go.

After Wiertel hit a jumper with 17:44 left, strongman Jeff Gibbs, who was eventually named the tournament’s Most Outstanding Player, got Otterbein back into the game with five consecutive points. That spurt sparked a 12-1 Otterbein run which turned the contest into a tight affair the rest of the way.

That, though, was the last time the Red Men scored.

Gibbs, a 6-1 center who was an All-American in football and basketball, scored four points in Otterbein’s closing 7-0 run in finishing off Carthage.

Things went so much better for Carthage the next day.

The Red Men were at their absolute best in trampling Rochester in the third-place game.

Carthage never trailed and the game was tied just once as the team peaked its lead at 25 on two occasions in the second half.

Garnes gave cruising Carthage the lead for good with a layup with 12:15 left in the first half. A layup by Wiertel with 2:10 to go in the first half put the Red Men lead in double figures for good en route to a 39-25 bulge at the break.

The Red Men lead was at least 20 points for all but a handful of seconds for the final 13:16 of this rout.

In his final game, Wiertel scored 23 of his 33 points in the second half. The future Carthage Hall of Famer was 13-of-27 from the field and 7-of-7 from the free-throw line with seven rebounds and three steals, capping a career which would leave him as the school’s all-time leading scorer.

McDaniel, a Carthage Hall of Famer, was the only other Carthage player in double figures (10 points) while Fabian finished with team highs of nine rebounds and five assists.

“And that’s only mentioning players from the 2002 team. (I) can’t forget Greg Ktistou from 2001, best practice player that I ever coached and a real winner; Brett Nishibayashi from 2001, great defender and team guy; and so many others.”