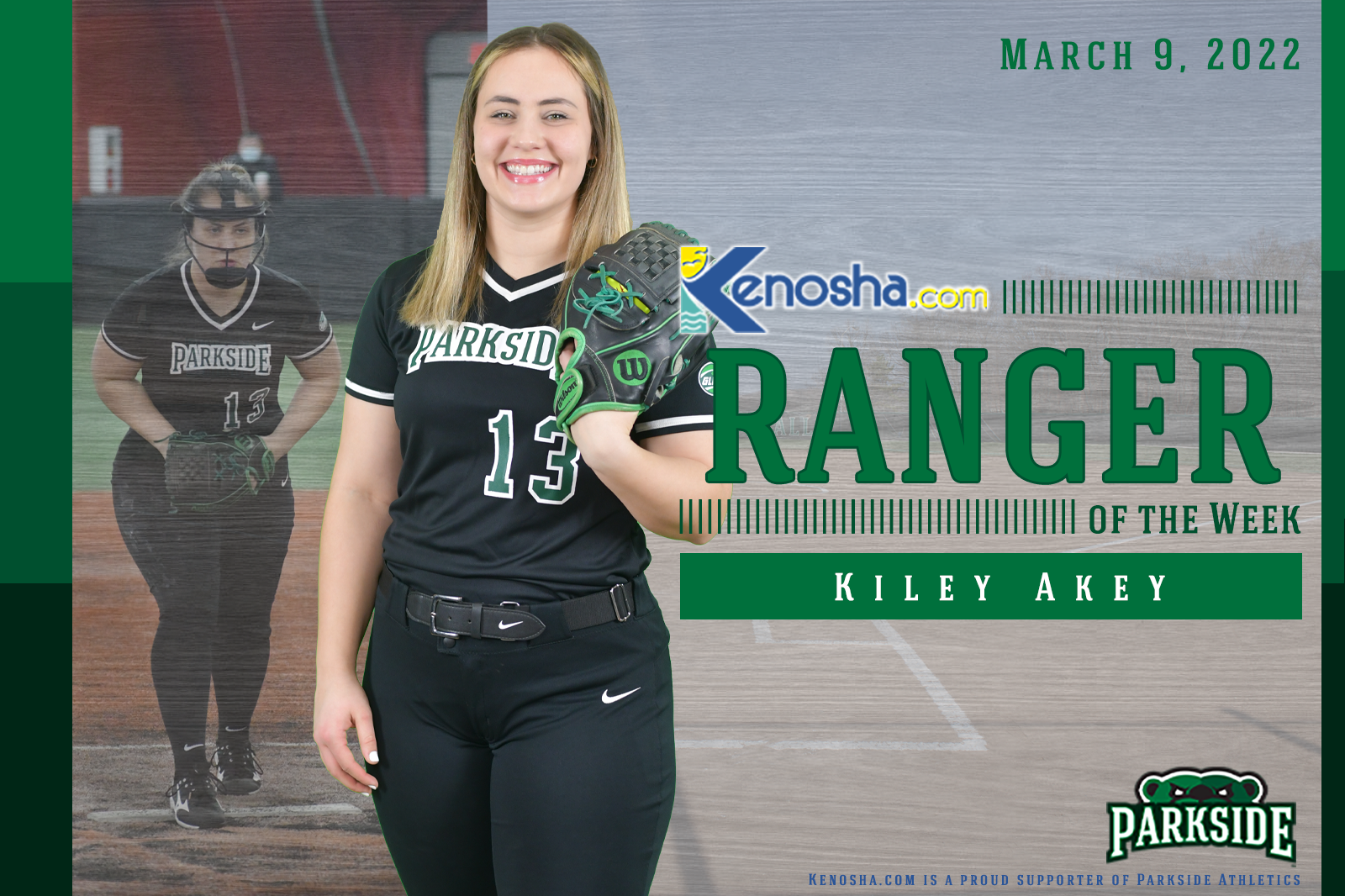 Ranger of the Week: Kiley Akey

Kiley Akey grew up as the youngest of four sisters in the small town of Weyauwega, Wis., in a softball-loving family.

Now, she’s among the oldest in her new softball family, the Parkside softball team. Her team looked to her for a big weekend and she delivered, pitching a complete game in three of the Rangers’ five weekend games and coming away 2-1 while allowing just one earned run over 20 innings pitched. For her amazing weekend, Akey has been named this week’s Kenosha.com Ranger of the Week.

Akey, one of just three seniors on the team this season, led the Rangers to a series win over Maryville over the weekend in St. Louis. In a pitcher’s duel on Friday in St. Charles, Mo., she went the distance against Lindenwood, giving up just one unearned run, but the Rangers couldn’t generate any run support. Akey got the starting nod again and Saturday and Sunday, and her defense had her back, helping the team to pair of wins over Maryville.

“The defense changed a lot this past weekend,” Akey said. “We’re finally coming together and our team made a lot of good plays that changed the momentum of the games. Since we are a young team, we needed a little bit more time.”

Akey, who plans to come back next season for her fifth year, joins Alyssa Laxson and Tijanne Ross as the team’s only seniors. The roster features seven juniors, three sophomores and 10 freshmen.

It’s in the family

Kiley and her three sisters, Kaitlyn, Kelsey and Karissa, all played softball at Weyauwega-Fremont High School, which is located near the center of Wisconsin between Stevens Point and Appleton.

Their mom, Dorinda, played softball at Adams State in Colorado while it was NAIA and their father, Chris, coached his daughters growing up and still catches for Kiley to this day.

Karissa was a three-sport athlete and played softball at Upper Iowa (D-II) and UW-La Crosse (D-III). Kiley, who was a WIAA All-State honoree three times, still credits her sisters for getting her into the sport from a young age, and teaching her how much it takes to be successful in it.

On deck for Kiley

Akey plans to return for her fifth season with the Rangers as she currently is a Kinesiology and Psychology double-major with a concentration in pre-occupational therapy at UW-Parkside. After graduating in the spring in 2023, she plans to go to graduate school at UW-Madison or UW-La Crosse.

For the short term, Akey and the Rangers will take this weekend off before heading back to Missouri to compete in the Fairfield Classic March 18-20.

Parkside Athletics doesn’t have another home event until March 25, but this weekend is a big one for five individuals.

Parkside wrestling is competing in the NCAA II Championships in St. Louis where Shane Gantz, Joe Arroyo, Job Ayala and Reece Worachek all qualified individually. If you are near the Sports & Activity Center on Wednesday (March 9), join the team for a National Send Off for the wrestlers competing this weekend. We will send them on their way at 3:30 p.m. as they look to bring home some hardware.

The track & field team qualified one individual, Carolin Bothe, who will compete in the 800-meter run in Pittsburg, Kansas, at the NCAA II Indoor Championships on Friday night.