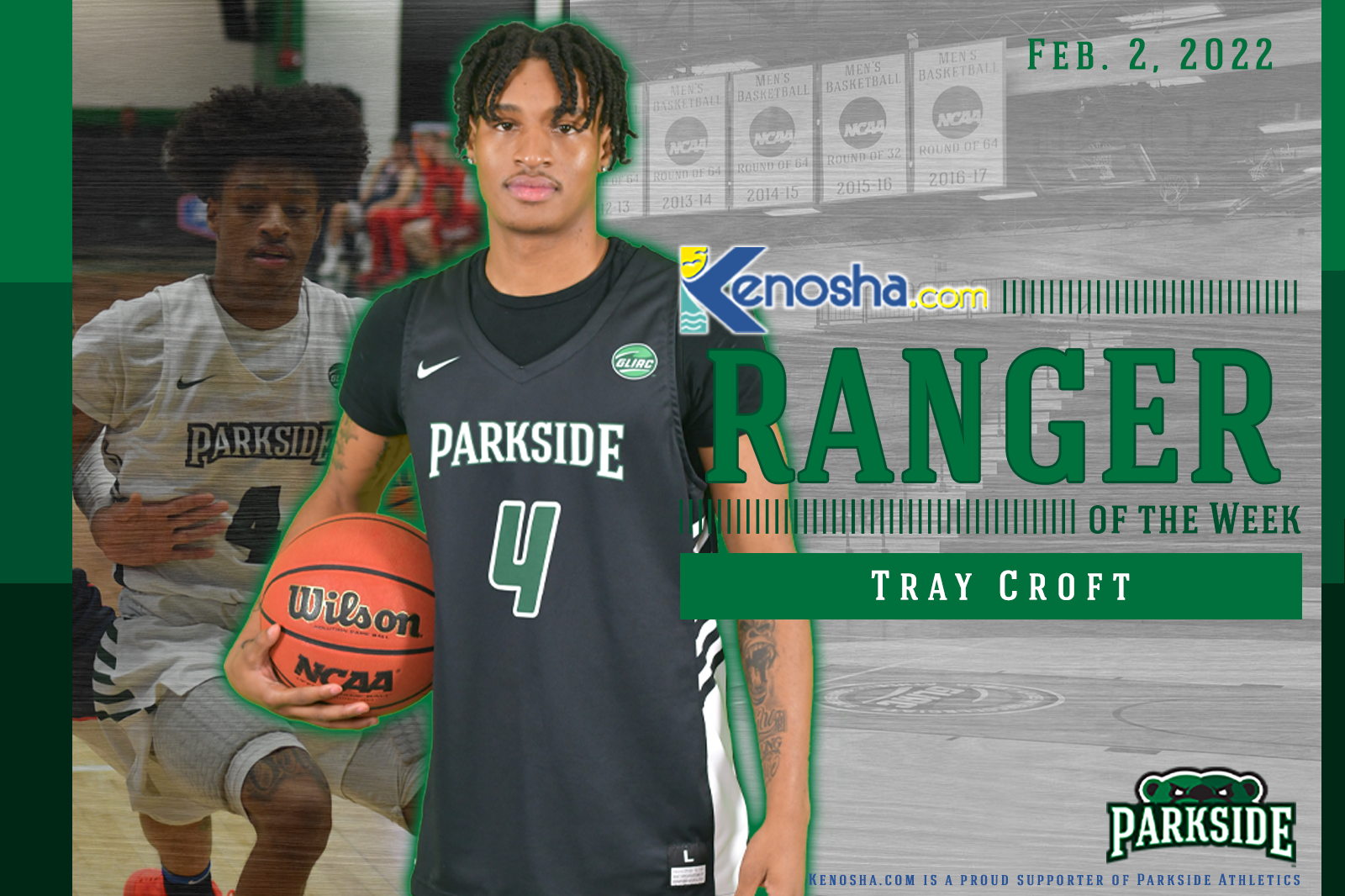 Ranger of the Week: Tray Croft

That’s redshirt senior Tray Croft’s mindset in his final year of collegiate basketball, and it’s paying off. He’s had many ups and downs in his basketball career, and the 2021-22 season for the Parkside men’s basketball program has been a terrific one for Croft. Fresh off a monster week for the Rangers, Croft has been named the Kenosha.com Ranger of the Week.

The Anniston, Ala., native helped Parkside to two huge wins last week, first in a 78-67 victory at No. 19 Grand Valley State where the 6-foot-1 Croft scored 26 points, including 15 straight in the final seven minutes to help seal the win. Against Davenport, another team with a winning record, he went for 30 points on 11-of-13 shooting and went 4-of-6 from deep. His efforts also earned him a Great Lakes Intercollegiate Athletic Conference Player of the Week Award, his second of the season. Parkside has now won five of its last six games and three straight on the road.

Croft always wanted to play Division I growing up, and that dream did come true, but it didn’t last long. He’s always been a basketball fan, and credits his love for basketball starting at a fair in Kentucky as a 3-year-old where he played a basketball arcade game and didn’t want to leave. After his career at Anniston High School in Alabama, Croft went to Iowa Central Community College and was the NJCAA National Player of the Year his second year, averaging 27.5 points per game and scoring a career-high 54 points in a game. With those kinds of numbers, Croft got some Division I attention, and his dream came true when he signed with the University of Northern Iowa for the 2018-19 season.

Had Croft had this mindset at UNI, he could’ve done major things for the storied mid-major program, but instead he never suited up for the Panthers and left the university after one season. Next up, Parkside coach Luke Reigel got in touch Croft to see where his head was at with college basketball.

After talking with Coach Reigel and officially joining the Rangers, Croft suited up for Parkside during the 2019-20 season, but only played five games before breaking his fifth metatarsal bone and being ruled out for the season. At the time, he was leading the team in scoring, rebounding and assists. The next season, Croft would play in the first nine games of the season, but became ineligible due to grades in the second semester. He was forced to watch from the sidelines as the Rangers went 3-7 without him after starting 6-3 with him.

Now in his redshirt senior season, he’s leading the Rangers in many major categories, including scoring, assists and steals. Parkside is 10-9 overall (7-5 GLIAC) and fighting for positioning for the GLIAC Tournament.  He’s gone for 20+ points nine times and 30+ twice this season.

Croft will graduate in the spring with a degree in sports management, but he still has aspirations of playing basketball professionally.

It’s a big week on campus for Parkside Athletics, as the basketball teams welcome in rival Northern Michigan for Pink Out Night sponsored by Advocate Aurora Health on Thursday (Feb. 3) with tip-off slated for 5:30 p.m. in De Simone Arena. On Saturday (Feb. 5), Parkside welcomes in Michigan Tech for Jockey Day at the Games with the women tipping off at 1 p.m. Also on Saturday, the track & field program is hosting the Parkside Classic at 9 a.m. in Petretti Fieldhouse. The Rangers are also celebrating the 36th Annual National Girls and Women in Sports Day (NGWSD) on Saturday. For more information on this event, for free tickets for youth teams or for activity pages, visit https://parksiderangers.com/sports/2022/1/17/2022-ngwsd.aspx.

Log on to ParksideRangers.com/Tickets to get tickets for this weekend, as well as the rest of the season.