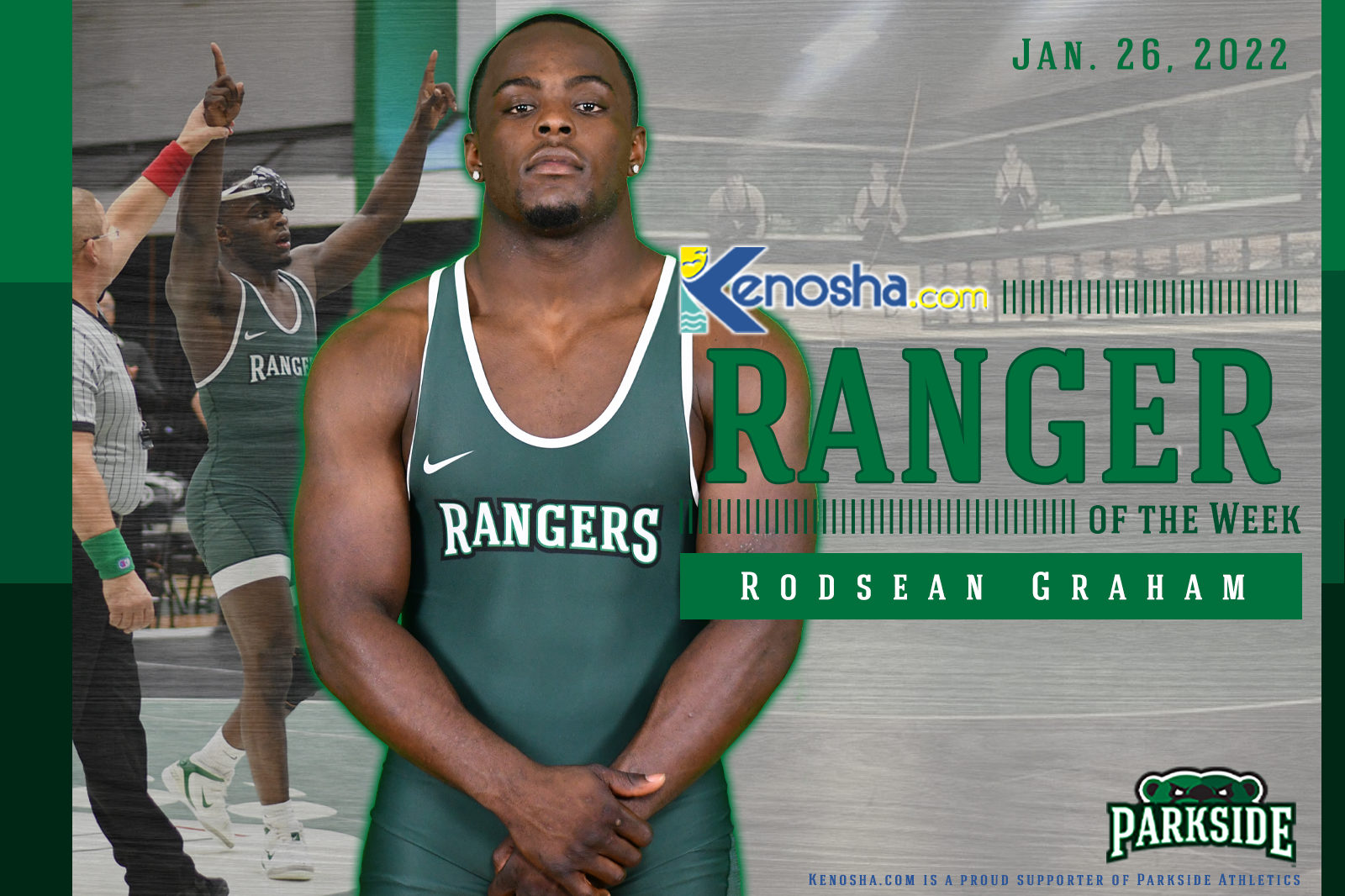 Ranger of the Week: Rodsean Graham

Redshirt senior is ranked ninth in the country at 197 pounds

If at first you don’t succeed, try, try again.

Rodsean Graham, now a redshirt-senior on the No. 8 ranked Parkside wrestling team, finds himself ranked No. 9 in the country at 197 pounds for the Rangers. But his journey to success at Parkside was not easy. Rewind to 2016, Graham and his twin brother Rayshawn were both high school stars heading to UW-Stout to play football. One brother stayed at UW-Stout, one brother was forced out due to grades after his freshman season. Fast forward six years, and Rodsean Graham, the wrestler, not the football player, is this week’s Kenosha.com Ranger of the Week.

Graham is coming off a 2-0 weekend for the Rangers where he defeated Minot State’s Dustin Swisher in a 10-2 major decision and then took down 10th-ranked Matt Kaylor in a 5-2 decision against No. 20 UMary. Graham improved to 13-10 this season while helping Parkside beat Minot State and UMary in De Simone Arena.

Graham was a three-sport athlete at Eisenhower High School in Blue Island, Ill., which is located on the south side of Chicago. He excelled as a linebacker, but also started wrestling his sophomore year and ran sprints for the track & field team. Rodsean and Rayshawn, part of a family that has seven brothers and one sister, were often in intense battles at home, and went live in 1-on-1 tackling drills at football practice pretty frequently.

After a year at UW-Stout with his twin brother, Rodsean was forced out due to poor grades. That didn’t stop Rodsean, who then enrolled at Joliet Junior College, while Rayshawn continued to excel for UW-Stout as a running back, leading the team in rushing in 2018 and 2019 and scoring nine touchdowns in five games this season for the Blue Devils.

After getting to Joliet, Rodsean realized they had a wrestling program, so he joined up and became a two-time national qualifier for the NJCAA program. Following a nice career at Joliet, Rodsean took a couple of visits at Parkside, a university he had never heard of until then, and fell in love with the campus. He turned down multiple NCAA Division I offers from schools such as Buffalo and Northern Illinois, to come to Parkside because “it’s a smaller school, nice campus and no distractions.”

“I am extremely proud of Rodsean for earning Ranger of the Week honors and the improvements he has made this season,” first-year head coach Nick Becker said. “He is the ultimate competitor and always overcomes adversity. The future is bright for Rod both on and off the mat.”

Graham, who is majoring in criminal justice and minoring in sports management, is a co-owner of two businesses with some of his buddies from high school. His first and most successful is a moving company where they help people get from state to state. They now own three trucks and have contracts with Amazon. His second business is in real estate, where his group owns a couple of buildings in the Chicago area, but Rodsean has an interest in getting into the house-flipping business, where he considers himself quite the handyman.

Coming up at Parkside

Next week is busy with basketball at Parkside on three days. The women’s basketball team is set to face Purdue Northwest on Monday, Jan. 31 at 5:30 p.m. to kick off the week. On Thursday, Feb. 3 the Rangers will battle Northern Michigan in a doubleheader starting at 5:30 p.m. and then welcome in Michigan Tech on Saturday, Feb. 5 at 1 p.m. for another doubleheader.

Log on to ParksideRangers.com/Tickets to get your seats today and watch the Rangers in action next week!