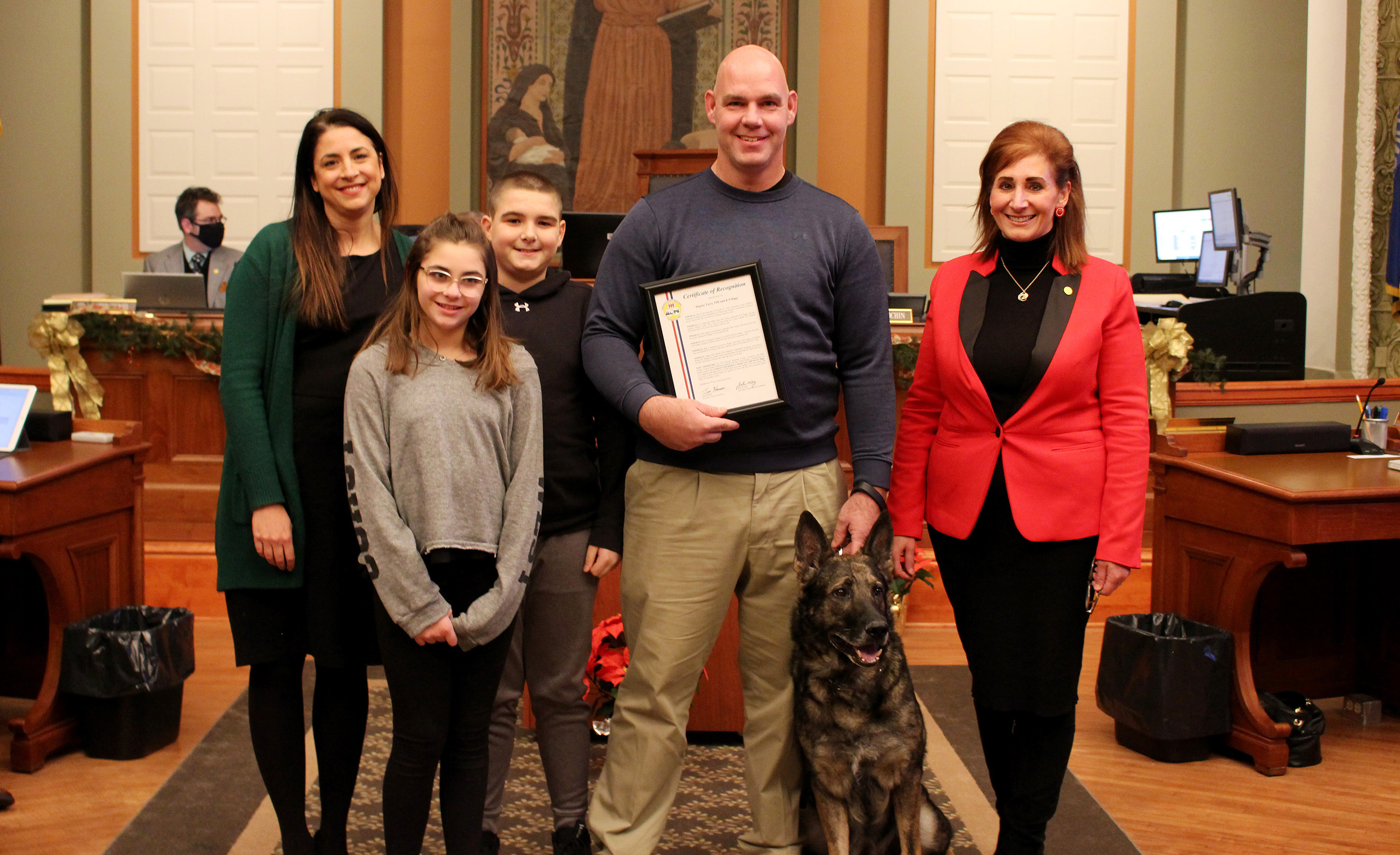 In presenting the certificate on the board floor, County Board Vice Chair Monica Yuhas noted there was further reason for celebration — Tuesday happened to be Deputy Tifft’s birthday. And as such, he celebrated alongside his wife Gwen, daughter Ava, son Lucas, and his faithful partner, Riggs, now back on the beat.
PHOTOS: SUBMITTED PHOTOS
Beyond The City, Local

Sheriff’s Department dog, shot in the head during October traffic stop, is healthy and back on the beat

Kenosha County Sheriff’s Department K-9 Riggs and his handler, Deputy Terry Tifft, were the recipients of special honors from County Executive Jim Kreuser and the County Board during the board meeting Tuesday night.

A Certificate of Recognition was presented to the dog and deputy in honor of their resilience and bravery in the wake of an October incident in which K-9 Riggs sustained a gunshot wound to the head during a high-risk traffic stop at a gas station in the Village of Bristol.

The Certificate of Recognition reads as follows:

WHEREAS, late on the morning of October 21, 2021, Kenosha County Sheriff’s Department deputies were dispatched to a Bristol gas station in an attempt to locate a stolen vehicle that was involved in a Chicago homicide; and

WHEREAS, as a high-risk traffic stop was being conducted, K-9 Riggs and his handler, Deputy Terry Tifft, were on the scene as a man wanted for multiple homicides fled on foot from the suspect vehicle; and

WHEREAS, while deputies attempted to apprehend the suspect, the man fired a shot, the bullet striking K-9 Riggs in the forehead; and

WHEREAS, after emergency surgery in northern Illinois, Riggs’ condition was said to be stable, though his future fitness for duty remained in question; and

WHEREAS, after a miraculous recovery, Riggs underwent a post-injury evaluation and was deemed fit to return to full duty, which he did on November 29, 2021; and

WHEREAS, Riggs and Deputy Tifft displayed remarkable resilience and bravery during this dangerous ordeal, which demonstrated the potential for harm that all of our law enforcement officers face each day they are on duty.

NOW, THEREFORE, we, Jim Kreuser, Kenosha County Executive, and John O’Day, County Board Chairman, together with the County Board of Supervisors, do hereby present this Certificate of Recognition to Deputy Terry Tifft and K-9 Riggs, in recognition and appreciation of their hard work and courage in the line of duty. We are proud of their achievements and grateful for the work they do to promote public safety in Kenosha County.

In presenting the certificate on the board floor, County Board Vice Chair Monica Yuhas noted there was further reason for celebration — Tuesday happened to be Deputy Tifft’s birthday. And as such, he celebrated alongside his wife Gwen, daughter Ava, son Lucas, and his faithful partner, Riggs, now back on the beat.