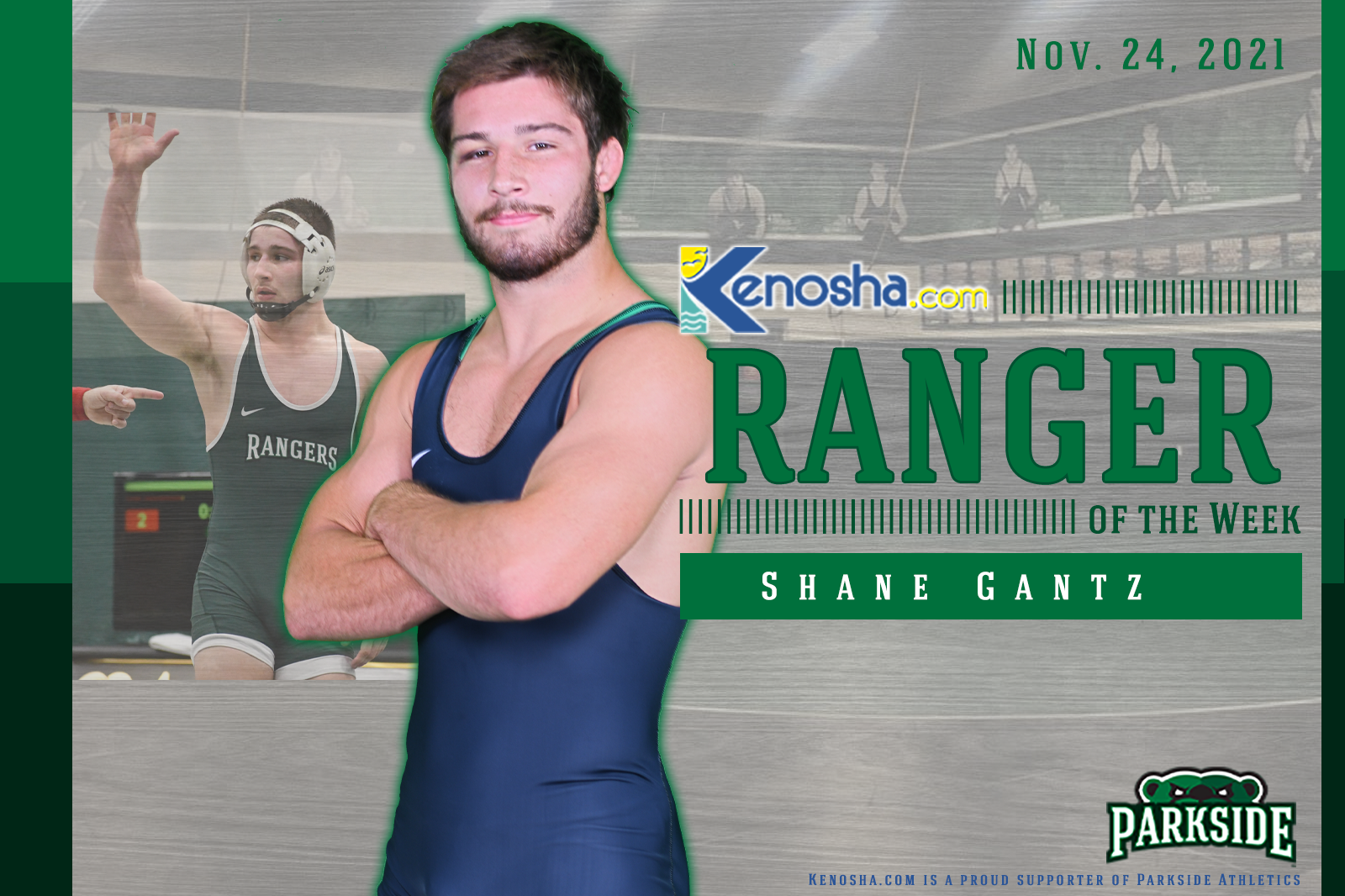 After a championship at Findlay, 165-pounder is 9-0 to start the season

All Shane Gantz does is win. The redshirt junior on the Parkside wrestling team won the Pointer Open Championship earlier this season. He won his match in the team’s only dual of the season and he just claimed a championship in the Findlay Open last weekend. As a result, Gantz has been named the Kenosha.com Ranger of the Week!

Gantz, who is ranked No. 5 in the nation at 165 pounds, improved to 9-0 this season and was also just named the Northern Sun Intercollegiate Conference (NSIC) Wrestler of the Week. Last weekend at the Findlay Open, Gantz earned a pin in round one, a technical fall in round two and a 4-0 decision over NCAA Division I Kent State’s Aaron Ferguson. He was mentally and physically ready for the championship match against top-ranked Alex Farenchak of Gannon, but Farenchak had a last-minute medical forfeit, giving Gantz the championship that he wanted to earn, rather than be handed.

Gantz will have another year of eligibility in 2022-23 and is getting his Master’s Degree from  Parkside in Business.

Runs in the family

Shane is the youngest of five children in the Gantz household, including four boys that all wrestled at Waukesha West High School (Seth, Scott, Shawn & Shane. Rachel is the lone sister). His brother, Seth, wrestled at Parkside for one season before deciding it wasn’t for him anymore, but he still coached at Waukesha West for four years. Shane’s father was a member of the U.S. Coast Guard, raising all of his boys to have a tough mentality and getting them interested in wrestling at a very young age.

Gantz was an NCAA II All-American in 2020, but didn’t get to actually wrestle at the NCAA Championships due to COVID-19 cancelling the rest of the season. Last season, Gantz qualified for the NCAA II Championships for the second straight season, but had an early exit after going 0-2 to start. After the early exit, he took no time off, getting back into the wrestling room immediately to work on his craft. He spent of a majority of his summer working out at Parkside, and working with Parkside facilities under the supervision of current assistant coach and Parkside national champion Craig Becker.

Parkside wrestling season tickets are available now on ParksideRangers.com/Tickets, as well as three exciting minipack options in the Build Your Own Mini Pack, Festival Foods Family and Friends Mini Pack and the Pack The Den Mini Pack.

The Rangers are home for the first time during the 2021-22 season on Saturday, Dec. 4 with the 50th annual Jim Koch Open, which will start at 9 a.m. in the Petretti Fieldhouse and will move to DeSimone Gymnasium for the championship matches.

Men’s basketball at home on Nov. 27