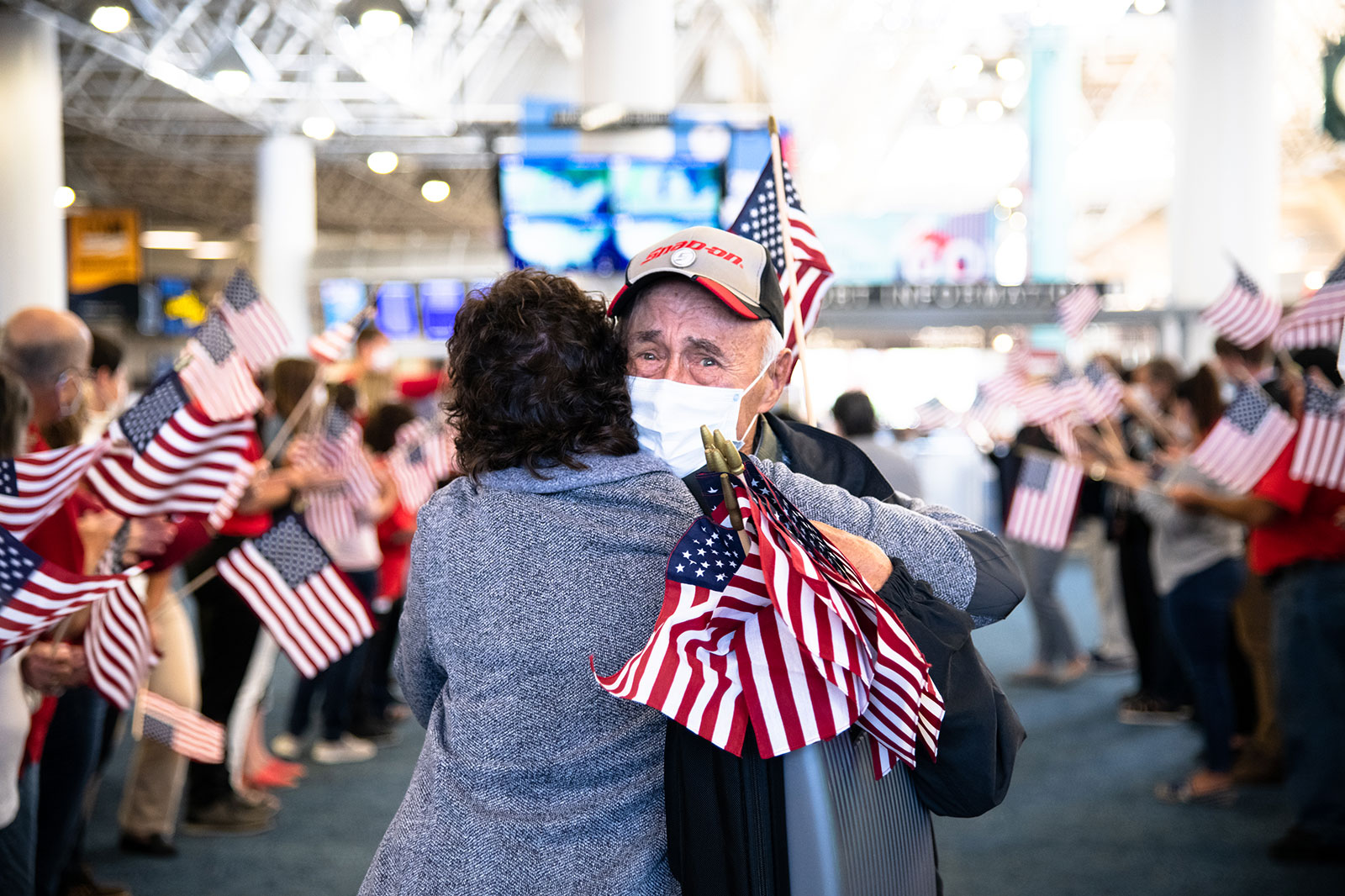 Kenosha native and U.S. Army veteran Jim Acerbi long wanted to be part of an Honor Flight, visiting Washington D.C. to see the memorials and other iconic destinations that recognize men and women who served like him. But he wasn’t eligible. Acerbi never saw active combat, serving from 1958 to 1960 in Germany.

Then his daughter called from Snap-on. He was booked for their next trip. His flight would leave in September, and a dream would come true.

“I broke out in tears,” Acerbi remembered, days ahead of Veterans Day. “I was so, so happy — so grateful for Snap-on, what they did. I never thought I would get to go. There are not enough thank-yous I can give Snap-on for what they did.”

What Snap-on did was take the 86-year-old Acerbi and 16 other veterans on a three-day trip of a lifetime — the latest of 15 Honor Flights the Kenosha-based company has sponsored since 2013. In all, nearly 700 veterans, their guardians and families have had the experience since Snap-on decided to build on its longstanding support of veterans initiatives by going all in on Honor Flights, with both corporate sponsorship of the initiative and by 100 percent funding flights for those in the extended Snap-on family.

“The goal is to make our veterans feel appreciated. They are heroes for our company and heroes for our country,” said Terri Wruck, manager of charitable contributions and the Snap-on Museum. “Especially for some of our Vietnam veterans … I have heard them say, ‘I feel thanked for the first time, and I feel proud for the first time because of it.’ We are healing wounds here, making them feel proud for what they have done.”

Snap-on’s support for the military dates to its founding, from its work as an essential supplier during World War II to its efforts as a veteran-friendly company, which have been recognized nationally.

“We have always honored our veterans,” Wruck said. “In 2013, the company was saying, ‘What else can we do? Is there another organization we can delve into?’”

The idea was born when two Snap-on veterans who had recently taken an Honor Flight showed Wruck their memory books from the trips.

“As they tried to talk about what happened, they literally teared up and cried,” Wruck said “We were trying to understand this wonderful, passionate experience that touched them and touched their families. We needed to get to know Honor Flight.

“It started with a cold call, and I was able to get to the executive director and chairman. That year in October was our first Snap-on Honor Flight.”

Acerbi was on the last flight in September, the first since 2019, due to COVID-19.

It was recognition for his service in the U.S. Army, Third Armored Division. Acerbi was primarily stationed at Gelnhausen in Germany, serving as a driver (of tanks, Jeeps and other vehicles) while awaiting a call to fight in Cambodia that never came, despite some close calls.

“We were always ready,” he said. “We had four or five alerts, where you wake up and take all of your gear and jump to your assigned vehicle. We got close to Frankfort, and were about to board the big planes.”

They always got called back.

Acerbi returned home with his wife, Barbara — childhood sweethearts, growing up in Kenosha — to begin a career that included work as a tobacco salesman, Anheuser-Busch warehouse worker and owner of the former Brassville Hotel rooming house, tavern and hall. He also worked for more than a decade at “Happenings Magazine” and now drives a passenger van bringing kids from Kenosha to the Pleasant Prairie RecPlex.

Barbara would work for more than 22 years at Snap-on as a receptionist, with their daughter, Pam, working at Snap-on today as a service support specialist.

Those connections helped get him on the flight, accompanied by his son, Michael.

Like with all Snap-on funded trips, the weekend began with a commercial flight into Baltimore. The largest groups fly from Milwaukee or Chicago, where they get a special sendoff as they arrive at the airport and make their way through the terminal. Occasionally, active military servicemen and women join in the sendoff celebrations.

Acerbi noted the VIP treatment beginning with his flight out of Mitchell International Airport, with Boy Scouts and others “saluting us and praising us and thanking us” as the 17 Snap-on veterans, their guardians and others joining the group from around the state boarded the plane.

Acerbi said it continued with “a first-class hotel” and a Friday night meeting featuring remarks from representatives of Honor Flight and Snap-on — each trip includes a Snap-on executive sponsor. Police escort the veterans around town.

“From the minute they get on the bus they feel like dignitaries,” Wruck said. “That bus is treated with respect.”

Snap-on made sure of it.

“We had so many people with Snap-on to help us — anything we wanted to do, they were there for you,” Acerbi said.

His biggest memory? The visit to witness the changing of the guard at the Tomb of the Unknown Soldier at Arlington National Cemetery.

“It was just outstanding,” Acerbi said, also recalling trips to see the Pentagon 9-11 Memorial and other war memorials around Washington D.C. Then this …

“We were sitting on this big, beautiful Snap-on bus, and they said we are having mail call,” Acerbi said. “I said, ‘What the heck? Am I in the Army now?’ They brought us letters that a lot of people from Snap-on and a lot of friends and relatives wrote … 40 letters from different people. They thanked me for my service. Very tearful, very, very emotional.”

Indeed, the surprise “mail call” is a highlight for many on the trip.

“I have had veterans say that (mail) is the only thing that kept them going,” Hamilton said. “We try to recreate that whole experience.”

Said Wruck: “They are reading from their grandchildren and children words that they have never heard. It really is a surprise.”

The next Snap-on tour is being planned for spring of 2022.

“It’s the memories after you get back. We see a lot of our retiree veterans at company events, and the fact they were on the tour they were on, there is a special bond there because you had a shared experience,” said Nick Drummer, Snap-on Human Resources Director.

Wruck added: “They have said many times … this is the most important day of their lives.”