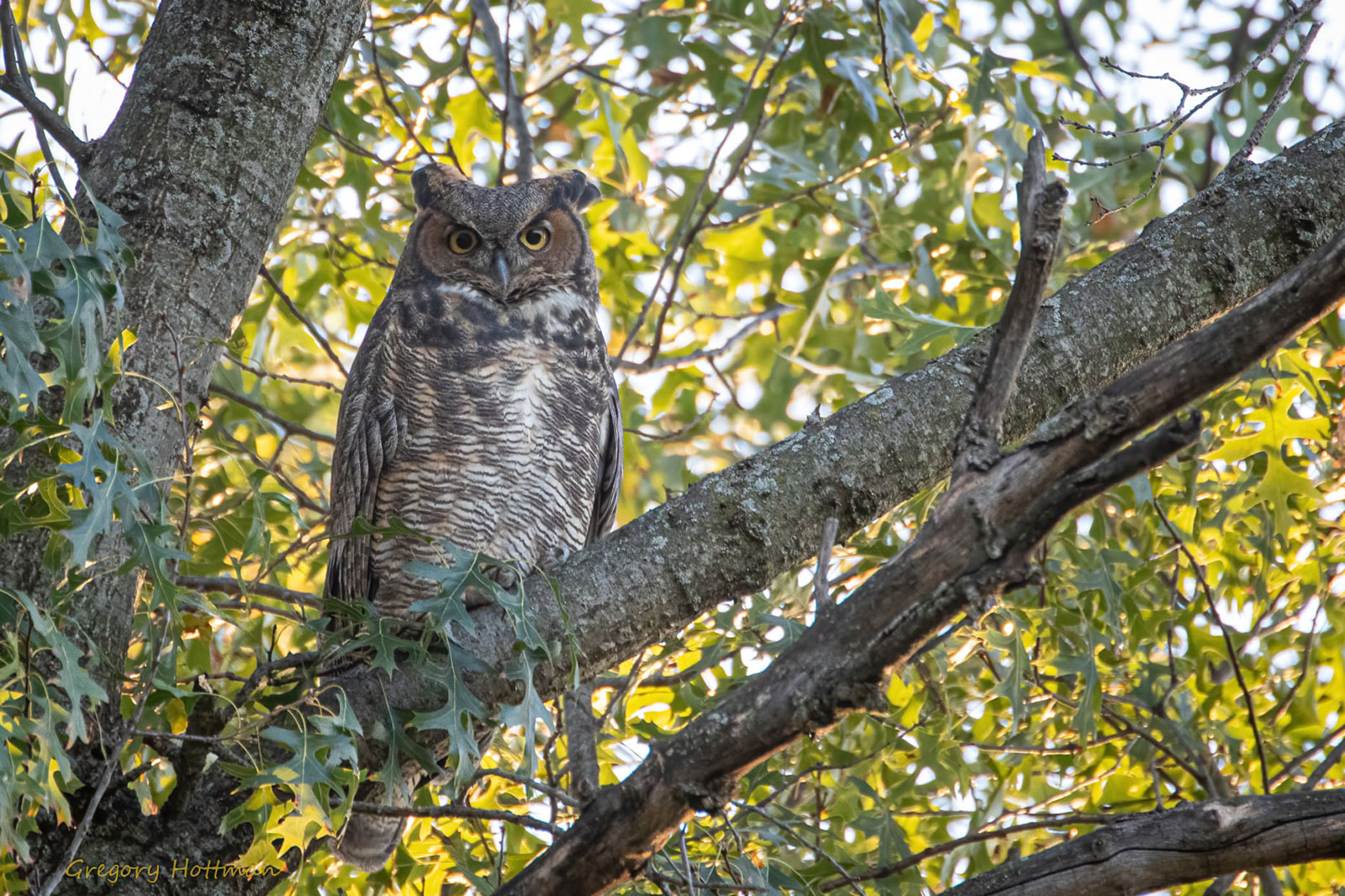 A Great Horned Owl have been described as having an expression of sleepy malice.
Local

Identifying the hoots of the birds of night

It was a late summer evening, a few years back, and I was sitting out on our back patio on the north side of Kenosha. I like to sit out there sometimes and relax as it is my oasis from the hustle and bustle of living in the city.

We have a wood lot behind our property that is quite large and it tends to be a safe haven for a myriad of city dwelling wildlife. There are deer, coyotes, opossums, raccoons, skunks, squirrels, chipmunks and other small animals that can all be seen in these woods with just a little bit of patience.

We also have gardens in our backyard that attract the wildlife even closer to the house sometimes as well as bird feeders for our feathered friends. These bird feeders attract chipmunks and mice as well.

On this particular evening, I had been watching the birds and a chipmunk feeding on the seeds that had fallen out on the ground. Twilight was setting in when I suddenly caught some movement from the corner of my peripheral vision. I knew I had seen something, but when I turned my head to see what it was I saw nothing out of the ordinary.

I then turned my head back to the feeders and realized rather quickly that all of the birds had left and the chipmunk was nowhere to be seen. The air was still and it had become unusually quiet other than the sound of city traffic in the distance. I looked around again and realized that a large horned owl had swooped in and landed in the tree on the edge of our property and was now looking down at me probably wondering why I had spooked all the birds away.

I couldn’t believe what I was seeing and I quickly pulled out my phone and snapped a picture of the rather large Great Horned Owl. After a few moments of looking at each other, I looked at the picture I had taken and realized that it was blurry. This is when I got the not so bright idea to get up and move closer to get a better shot. I stood up and started moving toward the owl when it suddenly took flight and was gone just as quickly as it had appeared.

I remember hearing owls hooting in the night many times since then and have always been curiously drawn to them. Recently, I have been hearing the sound of owls resonating hoots through the walls of my bedroom in the early morning hours of the night. I like to lay there and listen because normally there is more than one owl calling. I realized one night that I was not listening to the sound of a single type of owl but rather to the sounds of a Great Horned Owl and a Barred Owl each proclaiming my neighborhood as their territory.

This is when I decided to see if I could find the owls who had decided Kenosha would make a good place to live.

So, how did I know I was listening to two different types of owls? Well, I knew they were hoot owls obviously because they were hooting and their hoots were clearly different from one another.

First thing I did to determine what kind of owls I was listening to was research online and found that I had been hearing both Barred Owl calls and Great Horned Owl calls.

I have attached two sound files of the hoots I was listening to. Barred Owls typically do eight hoots and I learned an easy way people use to describe the sound is with the mnemonic “Who cooks for you, who cooks for you.”

The Great Horned Owls only do five hoots which sound different than the Barred Owls repeated calls. Both owls are considered hoot owls and are common in our area of the country. Because these owls are nocturnal, you are much more likely to hear them than see them.

I also found out that both types of owls hoot primarily to declare their territory to other owls but also use hooting as a means of courting a mate. The Great Horned Owl normally wins in territorial disputes because it tends to be slightly larger than the Barred Owl.

What’s unusual here is that both types of owls are presently sharing the same area and have been for most of the warm-weather months this year.

When I first saw the Great Horned Owl in my backyard, I spoke about it to friends that I worked with and one of them mentioned that he had always heard that the owls in the city have learned to sit on the light poles where they blend in and the light makes it difficult for anyone looking up to see them. I have personally seen many raptors like hawks land on these poles so it made sense to me that owls may be using them to their advantage to survive in an urban environment.

I also learned that owls are known to perch near roads in the warm-weather months in hopes of catching frogs that will warm themselves at night on asphalt. Owls feed by swooping down on their prey, impaling the prey with their talons. Sadly, this has been a problem in Wisconsin as many owls are hit by cars every year in their attempt to feed in this manner.

The re-emergence of the calls in the wee hours of the morning got me thinking that I should be going out to see if the owls I was hearing through the walls were actually sitting on the poles holding the street lights.

So, I made several early-morning walks out into the sleeping city down the length of my street and back down the adjacent street in an attempt to catch one of these owls on a pole. I was beginning to think that I was wasting my time because I wasn’t seeing anything and when I got outside the owl hoots seemed like they were coming from a totally different direction than I thought from inside the house.

I joined a Facebook group called “Owl about Wisconsin” a group for Wisconsin owl lovers that posts about their owl sightings. It was there that I was able to see wonderful photographs of the owls I was seeking.

Since I didn’t believe I was going to be successful in capturing an owl on a pole in the middle of the night, I asked Greg Hottman and Glen Hartjes if they would allow me to use a few of their photographs for my article. They both graciously agreed to allow me to borrow a few of the pictures which I have used here.

Surprisingly though, one night not long after getting their permission I did see a Barred Owl pole sitting just down the street from my house. He was above the level of the light which did make him difficult to see. Because I was specifically looking at the poles though with the purpose of seeing an owl, I was able to capture one image. I lightened the image slightly to make him more visible but clearly he is a Barred Owl. He flew away shortly after I spotted him and went into the wood lot behind the houses.

The next day, I ventured out into the wood lot thinking I may be able to see an owl roosting. Through my research, I discovered that Great Horned Owls prefer open nests created by other birds like hawks or ravens.

Sometimes, they will even use nests built by gray squirrels like the ones we have throughout the city. They also like the broken tops or snags of large trees that have been damaged by storms or lightning. Barred Owls also like these snags in the trees and will use the hollowed out depressions as their nest.

Owls, in general, will roost in trees of many types and use the forest as their home. I searched a good part of the morning and found several likely owl nests and trees with huge snags that would be desirable to either of the two owls. Unfortunately, though, I found no owls that I could see from the ground level.

So now that we’ve established that Kenosha does have at least two types of resident owls, here are their descriptions to help you identify which of the owls you saw should you happen to see one.

Barred Owls have a dark somber expression with a white facial disc. Their eyes are large and set on a white facial disc which gives them a sort of shocked expression. They have brown and white speckled feathers that help them blend in to the trees and are more brown from the back and white from the front. Barred Owls nest in the late fall and will hunt during the daytime even though they are primarily nocturnal creatures.

I hope you all enjoyed reading this article and will now be watching the light poles in your area. Who knows, you might just be lucky enough to see one of our most elusive residents! Take care everyone.