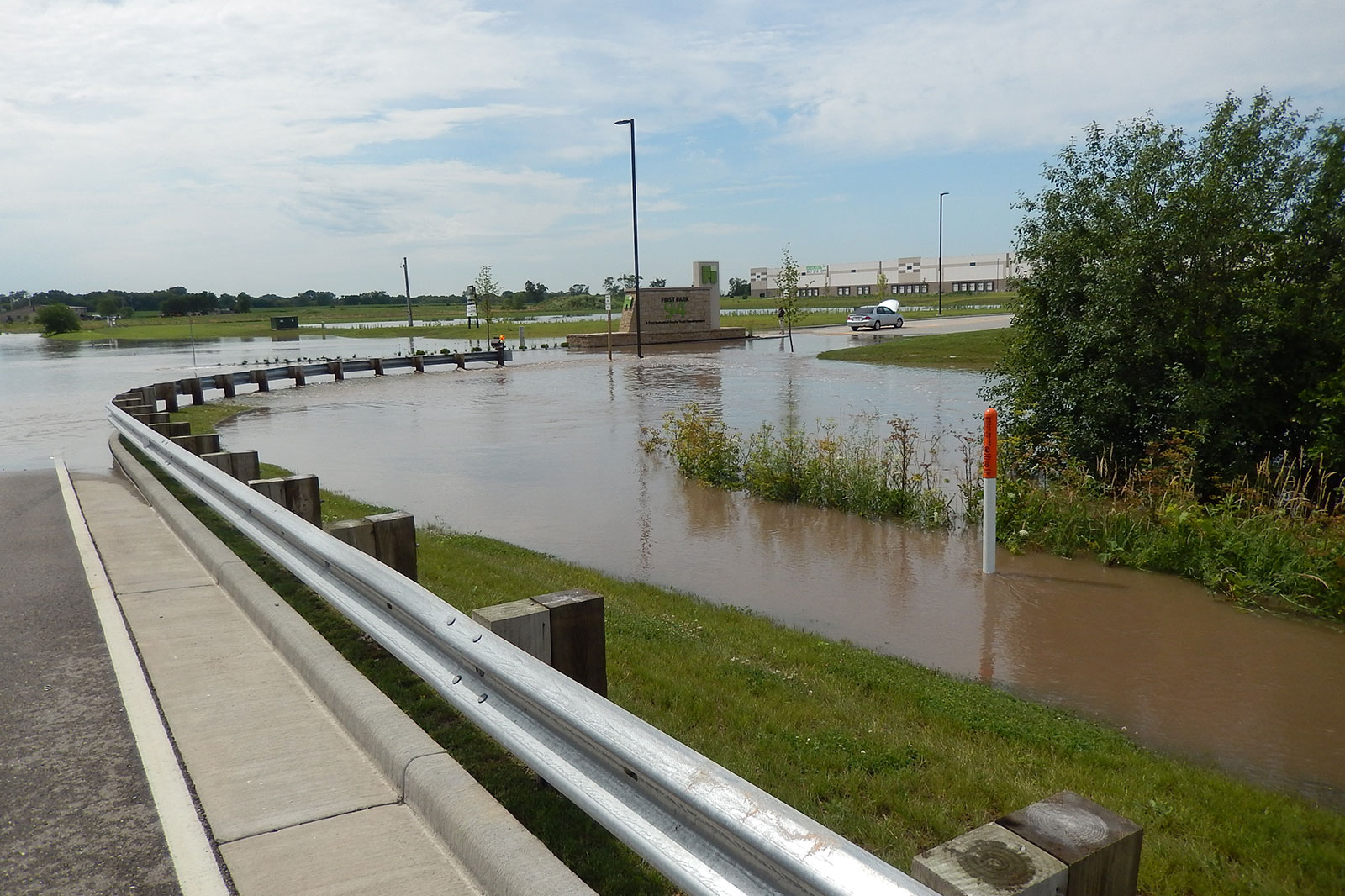 Pike River restoration project to focus on the south branch

Organization in line to receive $10 million grant from the U.S. Army Corps of Engineers

Mission: Restore, protect and sustain the Root-Pike basin watersheds through the funding and facilitation of a regional network of locally initiated projects

The south branch of the Pike River may be receiving a much-needed “kidney transplant” soon.

With $10 million of help from the U.S. Army Corps of Engineers, Root-Pike Watershed Initiative Network and championed by Kenosha County, the prognosis for a full recovery is good.

The south branch of the Pike River is considered the “headwaters” of the Pike River. It flows north from approximately Highway 50 all the way through Jerry Smith Pumpkin Farm and Hawthorn Hollow, where it eventually meets the north branch in Petrifying Springs Park.

In pre-settlement times, it was rich with hydric soils, dense wetlands and meandering creeks and lush oak savannas. These natural features serve to absorb and filter stormwater – much like our own kidneys remove waste and extra water from the blood and help keep body chemicals balanced.

Drenched with native plants, this was prime Rusty-Patched Bumble Bee habitat and ideal spawning grounds for Northern Pike. Native Americans from as far as the Chicago area would travel to Kenosha to reap the rewards of the annual Pike migrations.

After settlement, most of the south branch of the Pike River was ditched, tiled and bermed to quickly convey stormwater off newly created farmland. Without these adjustments, farming was virtually impossible – too saturated for horse, plow or tractor.

“Farmers realized that some of these areas were constantly wet and didn’t perform the way they wanted them to,” said Dave Giordano, Root-Pike WIN Executive Director. “They ended up creating ditches through these wetland areas and eventually put drain tile under these farm fields.

“That was the way to get the water off quickly. We’re grateful for the farmers and we understand they put food on the table. That’s what they needed to do to produce. What we’re doing now, is actually undoing what they did. There’s a better way to farm now.”

As a result, over the last hundred years or so, the south branch and its tributaries increased in velocity and created costly chronic erosion beyond what naturally occurs. More than a century of tiling the Pike River wetlands and prairies also decreased stormwater infiltration.

“Before all of the stuff you see around you was here, it was all native ecosystems,” said Nan Calvert, Root-Pike WIN Program Director. “Then things changed, particularly with wetlands.

“They were drained and cleared of their native vegetation. Then things evolved for a very long time, especially without highly functioning wetlands and we run into a lot of problems with water quality and flooding. You can think of them as a sponge or the kidneys of the earth. They take up surface water, hold it, cycle it through, filter it, all while providing habitat for myriad species.”

Today, we ask 10 percent of the original wetlands to infiltrate the same pre-settlement area.

Flooding, phosphorus, and threats to infrastructure increased and persist to this day. Thousands of tons of sediment spill into Lake Michigan every year from the south branch while costly harbor dredging continues.

Reports of Northern Pike in the south branch are scarce if any.

Fortunately for the watershed, a replacement organ is available.

With a unique $10 million grant contribution from the U.S. Army Corps of Engineers, Kenosha County and Root-Pike WIN are poised to rehabilitate this undevelopable floodplain corridor from Highway K north to Highway 142.

If the $6 million local share is approved by the County Board of Supervisors in the next few weeks, the project’s first phase will create an environmental corridor – larger than Petrifying Springs – in the heart of Kenosha.

“While the local share of $6M seems daunting, the project has already received additional funding from the Fund for Lake Michigan and the Southeastern Wisconsin Regional Planning Commission (SEWRPC),” Giordano said. “Kenosha County and Root-Pike WIN will continue to seek and secure grants to offset the local funding requirement.”

Phase One estimates include:

The south branch rehabilitation will also include an off-road multi-purpose trail – connecting existing east-west trails on Highway 142 and new trails to be built as part of the Highway K expansion.

Future phases of the environmental corridor along the south branch would connect the trail to Highway E and ultimately Petrifying Springs.

“You could bike all the way from Indian Trail (High School) to Highway S to Highway E to Parkside, down to Carthage, downtown Kenosha and to a connecting loop,” Kenosha County Executive Jim Kreuser said.

Pursuit of a better Pike River has been of great interest to the community going back to the 1980s. The Southeastern Wisconsin Regional Planning Commission’s (SEWRPC) Pike River Plan (1983) and Root-Pike Watershed Initiative Network’s Pike River Plan (2013), both documented the growing issues and recommended similar solutions for south branch rehabilitation.

Evidence of similar success with restored environmental corridors is easy to find in the nearby Village of Mount Pleasant. More than five miles of stream channel and wetland restoration has turned a flood-prone liability into a community asset.

Within Kenosha County, the corridor restorations in Petrifying Springs speak to the leadership and stewardship of our valuable green spaces. An improved south branch will also protect assets like Hawthorn Hollow and Petrifying Springs, which are hydrologically downstream.

Putting wetlands back where they were originally located also creates the natural green infrastructure that is home to hundreds of native species. The name Kenosha, or “Kenozia – The Place of Pike” was affectionately called by Native Americans because of the gamefish’s abundance.

Accounts of Pike in the Pike River are now extremely rare. Bringing back Pike-loving wetlands brings an opportunity to do better than “in name only” by recreating the Pike’s pre-settlement habitat.

With the $10 million grant, this may be our last chance to also restore a valuable part of our “Kenozia” heritage. Equally important, the south branch is prime habitat for the federally-endangered Rusty-Patched Bumble Bee. There is an extreme sense of urgency to save this valuable pollinator, and the new prairie and forest features will aid in the bee’s recovery. The new corridor design will also include an oak savanna, which is now the rarest land type in Wisconsin. Did you know mature oak trees can absorb more than 50 gallons of water a day?

The south branch rehabilitation project puts green infrastructure and places where people want to be, in the new era of COVID-19, into an area of the Pike River watershed that needs it most.

It is not often that infrastructure projects have so many overlapping benefits. The County, with the help of the U.S. Army Corps of Engineers and Root-Pike WIN, will build this oasis to coexist with adjacent areas where more development is expected.

Environmental corridors add to the value of the adjacent land because they offer recreation and refuge to employees, residents and visitors of the developments. Yes, a healthy kidney can be a recruiting tool.

As the vote for local funding draws near, Kenosha County has the unique opportunity to undo a century of negative impacts to the Pike River corridor. A well-connected multi-purpose trail brings more opportunities for a healthy lifestyle to more residents.

Creating a stormwater infrastructure corridor where people want to live, work, play and invest in is a county commitment to a resilient future.

“Root-Pike WIN has been such a phenomenal ally,” Kreuser said. “(Giordano) and (Calvert) continue to work with our planning department. We have a grant writer. They’ve pointed us in a direction that has gotten us millions of dollars. That’s how we can afford to do these things.

“If this (vote) doesn’t pass, this opportunity is gone. Army Corps goes to another place. It’s gone.”

Now is the time to turn a very unhealthy south branch into a healthy ecological, economic and recreational resource that enhances the brand for the local city, county, town and village.

We encourage Kenosha County leaders to choose the south branch “transplant.” From liability to asset, this is our time to leave a legacy for generations in “Kenozia.”