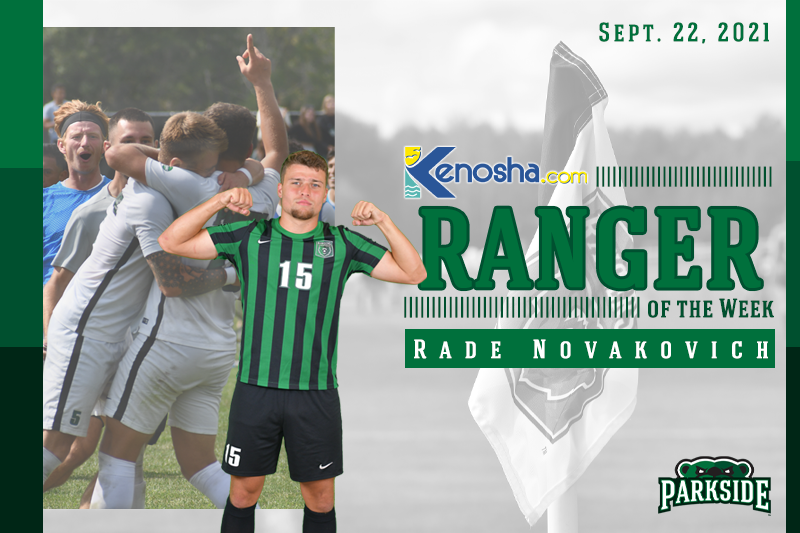 Ranger of the Week: Rade Novakovich

What’s that one Drake song? Back to Back? Ask Rade Novakovich of the No. 14 ranked Parkside men’s soccer team, he’ll know what song your talking about, because he was named the Kenosha.com Ranger of the Week … again.

Last week, he was named the Kenosha.com Ranger of the Week after scoring three goals and assisting another in a 2-0 week for the Rangers. This week, he outdid himself.

He scored or assisted every goal for Parkside over another 2-0 weekend, this one coming on the road against a pair of rivals in Northwood and Saginaw Valley State. Against Northwood, the Muskego native scored the first two goals for Parkside and then assisted the next two in the 4-1 victory. Against SVSU, who was picked to win the GLIAC in the Preseason Coaches’ Poll, he came through with another game-winner in overtime.

Because of another big week, Parkside jumped nine spots in the United Soccer Coaches top-25 poll up to No. 14.

It runs in the family

Rade’s brother, Andrija Novakovich, plays professionally for Frosinone in Italy. They are in Serie B, the second-highest league in the country. Andrija was named the Gatorade Wisconsin Player of the Year after scoring 41 goals for Muskego High School. He earned a full-scholarship to play at Marquette, but he decided to play professionally.

Like many families during World War II, Rade’s grandfather was forced to leave his home in Grahovo, Serbia, which is now Bosnia. He moved to England, where he played for a local soccer club, then he moved his family to Milwaukee to be closer to his sister. Currently, Rade’s immediate family still resides in Muskego.

Catch the Rangers in action this weekend

This upcoming weekend at Parkside, the men’s soccer team hosts Davenport at noon on Friday (Sept. 24) and Purdue Northwest 2:30 p.m. Sunday (Sept. 26) following the women’s game at noon against Northwood.  Friday’s game will be Bark in the Park, where you can bring your dogs along with you in the stands at Wood Road Field.