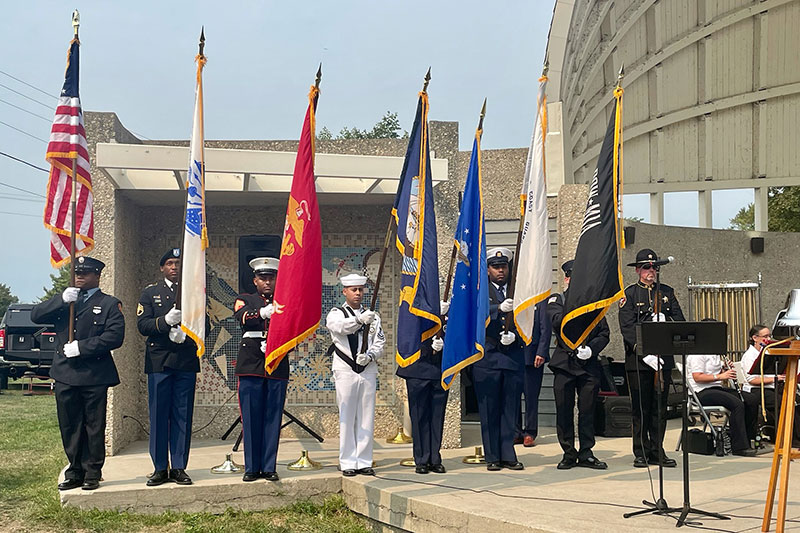 On the 20th anniversary, Kenosha honors the lives lost on 9/11

The Kenosha community honored the nearly 3,000 men, women and children who lost their lives 20 years ago during the Sept. 11 terrorist attacks.

“We are strong. We are courageous. We are resilient. And finally, we are mortal,” he said in one of the opening speeches. “One of the things everyday when I run into officers as they are going out on the road is I let them know to do good. In the words of St. Francis of Assisi: ‘While we have time let us do good.’”

Kenosha Fire Chief Christopher Bigley highlighted the hundreds of first responders who gave their lives evacuating the World Trade Center’s Twin Towers after they were struck by commercial planes hijacked by terrorists.

“When a man or woman becomes a firefighter, the biggest act of bravery has been accomplished. What they do after that is all in the line of work. I believe this extends to all our first responders. When we remember the horrible attacks of 9/11 I pause, I reflect and I say a special prayer for the first responders and their families who gave the ultimate sacrifice, fulfilling the promise they made during their oath of public service,” he said.

Toward the end of the ceremony, the Kenosha Area Pipes & Drums group performed the “Armed Forces Medley” and “Amazing Grace.” The fire department chaplain offered the “Fireman’s Prayer” and rang the silver Fire Bell to honor the fallen first responders.

Kenosha County Sheriff’s Department Lt. Horace Staples said he knew “America was under attack” when he saw the second plane crash into the World Trade Center on television two decades ago.

“I do want to recognize, as my previous colleagues did, the number of police, fire, EMS, paramedics and military personnel. I also want us to always remember the 911 dispatchers who had to hear the calls for help. People were calling for help when the towers were coming down and the planes were crashing. Those are some of the unsung heroes that are out there,” he said. “Today we honor those heroes and the victims who lost their lives.”

“We ask you, Lord, that you continue to embrace them in your loving care. Bless and console their loved ones.”