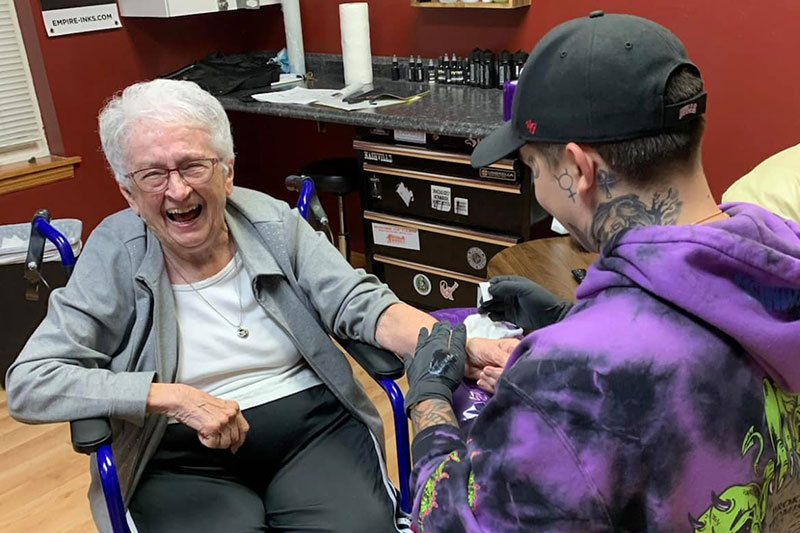 Woman celebrates 100th birthday by getting a tattoo in Kenosha

On the eve of her big day, the Mount Pleasant resident visited The Kenosha Tattoo Company, 3012 30th Ave., and received some ink courtesy of tattoo artist Trevor Blake.

Kenosha Tattoo Company owner Jon Principe confirmed that Myrtle is the oldest client to receive a tattoo at his shop, which opened in 2016.

Who was the previous record holder?

That would be Myrtle, who celebrated her 96th birthday in 2017 by getting her first tattoo.

Three of the other four members who joined Myrtle on her tattoo trip to Kenosha celebrated the occasion by getting tattoos of their own.

“Everyone else did except me,” Diane Larsen said with a laugh. “I have no desire to get a tattoo. I just wanted to witness it.”

Blake, one of eight tattoo artists at The Kenosha Tattoo Company, said his previous oldest client was 78 years old.

“It’s safe to say she might be the oldest client that I’ll ever have … if I don’t tattoo her again, that is,” Blake said.

“It’s not easy tattooing older clients. The reason is because their skin is so thin. It’s extremely hard to tattoo. Luckily it came out good. Just a little bit of bruising, but that goes away.”

Getting a tattoo was no big deal for spunky Myrtle, who was married to Don for 60 years before he passed away in 2015. Myrtle has enjoyed good health and still lives in her own house.

“In the last six years, my mom has kind of had a bucket list of things she has wanted to do,” Diane Larsen said. “Get a tattoo was one. She went on a hot air balloon ride. She went ziplining.”

After Myrtle’s visit, The Kenosha Tattoo Company posted a picture of its centenarian client on Facebook and it generated quite a response. The post has been “liked” more than 1,000 times. In addition, the Facebook group “Kenosha Strong” also shared the post and it has been “liked” nearly 500 times.

The day after the tattoo outing, the Larsen family celebrated Myrtle’s 100th birthday with a party at The Apis Hotel & Restaurant. Afterward, a group went to the nearby Tavern on 6th.

That is when Myrtle’s celebrity status was officially cemented.

“Somebody at the bar recognized her (from social media),” Diane Larsen said. “The person said, ‘Oh my gosh! That’s the lady that got the tattoo!'”