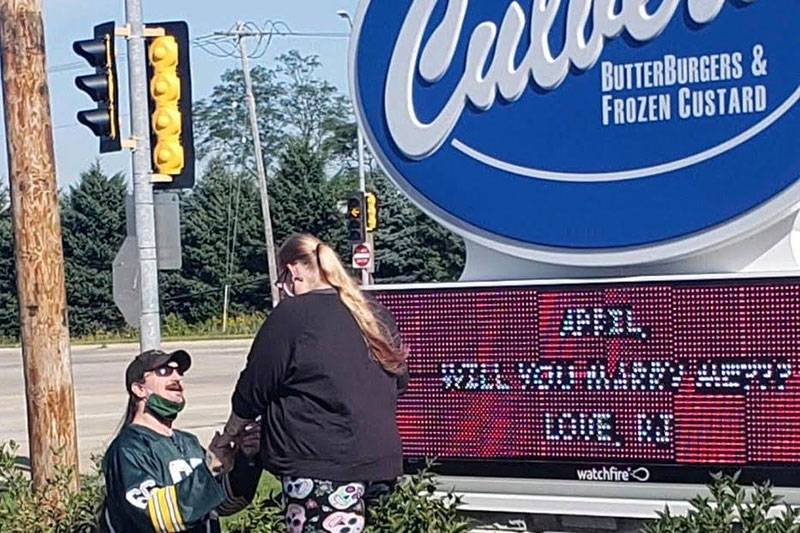 RJ Sirna orchestrated a unique proposal on Sept. 20, 2020 when he asked April Masterson, his longtime girlfriend, to marry him at the Highway 142 Culver’s in Kenosha.
Kenoshans, Local, News

The most Wisconsin wedding proposal ever has culminated in marriage.

Sirna orchestrated the unique proposal on Sept. 20, 2020 when he asked Masterson, his longtime girlfriend, to marry him at the Highway 142 Culver’s in Kenosha.

Wearing the jersey of Green Bay Packers’ legend Ray Nischke, Sirna dropped down on one knee in front of the Culver’s marquee sign which read, “April, will you marry me? Love, RJ.”

“I thought it was beautiful,” said Masterson of the proposal. “He had to put time, effort and thought into it and tell a lot of other people what was going on before it happened. The Culver’s employees actually stopped the drive-thru for the whole ordeal. After he proposed and we started walking away, everyone was clapping for us. It was so sweet. I loved it.”

Masterson wasn’t the only one who cherished the moment. A Kenosha.com Facebook photo was shared over 5,000 times and received over 1.3 million views.

The comments were overwhelmingly supportive of the couple — offering clever one-liners and quick-witted banter — despite the less-than-glamorous, unfairytale-like proposal setting.

Never underestimate a girl’s love for cheese curds and custard.

“And they say romance is dead,” commented Hilary Shanefelt on the mile-long Facebook thread.

Many of the female posters tagged their significant other with quick, friendly jabs.

Megan Carey wrote: “Why was mine on a beach in Florida when it could’ve been at Culver’s?”

Gabbi Schluester typed: “I wouldn’t even be mad if you had a concrete mixer waiting for me afterwards.”

“Culver’s has been a big deal in our lives,” said Masterson, who relocated to Wisconsin from Arkansas 10 years ago. “As soon as we started dating, we began going to Culver’s together.”

Sirna, a local factory worker, coordinated the proposal with store owner Kandace Young and made sure Masterson’s family was there to witness the special occasion.

In short, he nailed it.

“It was a very sweet moment,” Young said. “He asked if he could use our sign to propose to his girlfriend. How can you say no to something like that?”

Young attended the wedding and passed out free Culver’s custard tokens to every guest.

“It was a beautiful celebration,” Young said. “April was a beautiful bride. I am very grateful and honored that I was invited to the wedding. That day has been a bright spot for us during a very crazy year.”

The newlyweds are currently honeymooning in Arkansas.