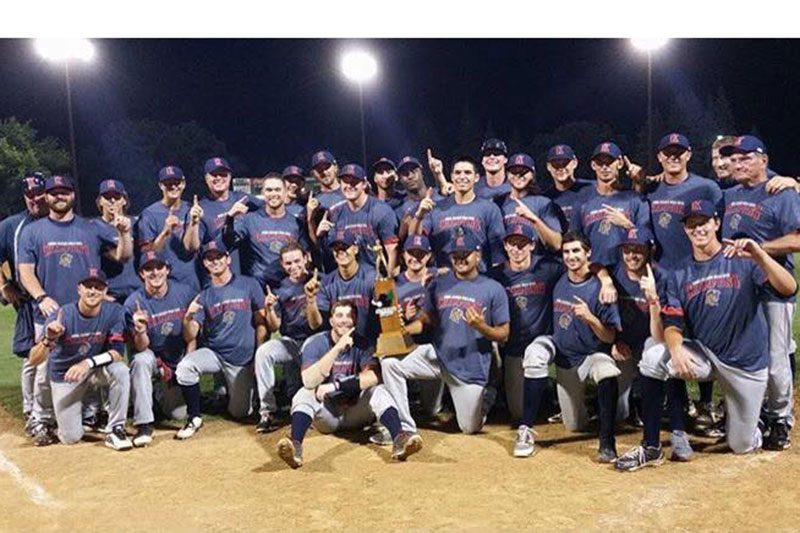 The Kingfish celebrated a Northwoods League title in 2015

When the Kenosha Kingfish were laying down roots here, there were some who questioned if the team would ever play a game, let alone win a championship.

Kenosha is a wonderful baseball town.

However, the variety of the amateur, high school and college programs in the area and the professional teams in the region made survival difficult here for “high level” teams.

Just ask the Kenosha Twins, the city’s top-level franchise, which fought tooth-and-nail to survive here for nine years behind the tireless efforts of the great Bob Lee before departing for Fort Wayne, Ind., in 1993.

Or the Kenosha Kroakers, who had a tumultuous run in the Northwoods League from 1994 to 1998.

Or the Kenosha Mammoths, who spent one confusing Frontier League season here in 2003 before bolting.

Or the nearby Lake County (Ill.) Fielders, an independent league team whose run in 2010 and 2011 was so unstable that their play-by-play man quit … ON THE AIR!

So when Big Top Baseball announced they were bringing another Northwoods League franchise to town, you couldn’t blame some Kenoshans for being skeptical.

That skepticism quickly dissipated at the team’s first public gathering on Jan. 17, 2003 at the Civil War Museum.

BTB executives Vern Stenman and Conor Caloia were respectful, enthusiastic, honest, direct and forthright but most of all, they had a plan and proof the plan worked.

The group, headed by Steve Schmitt, also owned the league’s Madison Mallards and their goal was to deliver the same family-friendly, fan-first product to Kenosha that made their other team a wild success.

Spoiler alert: They did.

Playing in a revamped Simmons Field, the team, which became known as the Kingfish, was an immediate hit and instantly won the hearts of the community — including Lee, who became the group’s most fervent supporter.

The Kingfish drew 72,838 fans (an average of 2,207 per contest) in its inaugural campaign while going 41-30 under former big leaguer and ex-Kenosha Twins manager Duffy Dyer.

By comparison, the Kenosha Twins, which consistently battled the climate as a full-season team, only surpassed 72,838 once at the gate and that’s when the Class-A Midwest League team drew 87,672 in its first year of 1984.

In its second season, the Kingfish had as much success on the field as they did off of it.

A day after winning the Northwoods League title, that success off the field hit home — literally.

On this date (Aug. 15) in 2015, the Kingfish and Kenosha celebrated the title, which really demonstrated and cemented the bond between town and team.

“I think the thing I will remember the most was the crowd at Simmons Field to welcome the team back home after winning the championship,” Caloia said. “On just a few hours’ notice, nearly 900 fans showed up to celebrate. There were more fans at our championship celebration than at the actual championship game in St. Cloud the night before. The bond between the community and the Kingfish has been strong from the start, but that night really showed the connection.”

The night before, the Kingfish delivered the city its first “high level” baseball championship since the K-Twins claimed the Midwest League title in 1987.

Granted, the Kroakers won the 1995 Northwoods League crown but that was before the circuit emerged as the premiere summer wood bat college league it is today.

The Kingfish reached the playoffs by winning both halves of the NWL’s South Division and finished 48-24 overall.

After dispatching the La Crosse Loggers and Madison in the first two rounds of the playoffs, the Kingfish took on the North Division champion St. Cloud Rox for the crown in a best-of-three series.

The Kingfish took the first game 6-4 at Simmons Field on Aug. 14 to put themselves in a position to win it all the next night in Minnesota.

And that they did … easily.

Just like the opener, the Kingfish took the lead early — this time on an  Alex Dunlap sacrifice fly — and never looked back.

Behind a 14-hit attack, led by 3-hit efforts by Jason Scholl and Zack Weigel, and sterling mound work from E.J. Trapino, David Meade and Ryan Orr, the Kingfish cruised to an 8-1 win.

“It was a pretty memorable run in just our second season,” Caloia said. “The fans were amazing. Many teams struggle to draw a crowd in the playoffs, but our fans packed Simmons Field.”

And they have ever since as the Kingfish have continued to be a Kenosha summer staple.