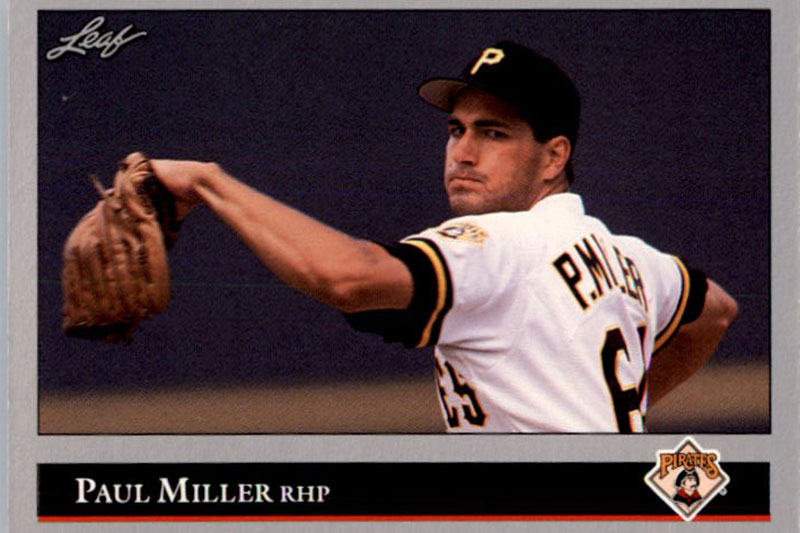 Carthage graduate Paul Miller made his first big-league appearance when he started on the mound for the Pittsburgh Pirates in a game against the Atlanta Braves on July 30, 1991.
Sports

This Date in Kenosha Sports History: Right-hander remains the only Carthage product to play in the bigs

On this date (July 30) in 1991, Paul Miller became the first Carthage College product to play in the major leagues when he made his debut for the Pittsburgh Pirates.

The right-handed pitcher received no decision after turning in five solid innings against the Atlanta Braves before 27,099 at Fulton County Stadium in Atlanta.

The fact that the Burlington native was even pitching in the big leagues was an incredible story.

It’s not too often that players drafted as late as Miller make it to “The Show” but he did.

Following a career at Carthage which saw him earn All-CCIW honors and the school’s pitcher of the year award, Miller was taken by the Pirates in the 53rd round of the June 1987 draft. The graduate of Richmond-Burton (Ill.) High School was Pittsburgh’s last choice and the 1,199th overall selection of that year’s draft.

Miller steadily climbed through the Pirates’ minor league system between 1987 and 1990.

He began 1991 at Pittsburgh’s Carolina affiliate in the Double-A Southern League where he went 7-2 with a 2.42 ERA in 15 starts. After Miller won his first two decisions with a 2.08 ERA in his first taste of Triple-A at Buffalo, he was promoted to the Pirates.

Pittsburgh manager Jim Leyland assigned Miller to start the third of a four-game set which was a preview of the National League Championship Series.

Backed by a lineup with established players such as Barry Bonds, Bobby Bonilla, Jose Lind, Jay Bell and Gary Redus, Miller was effective through his first five big league frames.

Miller walked Otis Nixon — the first batter he faced — but then got Jeff Treadway to bounce into a 3-6-3 double play. After Terry Pendleton, that season’s National League MVP, doubled, Miller ended the inning by retiring Ron Gant with his first strikeout.

Miller then cruised through the second, third, fourth and fifth innings, giving up two hits while setting down 12 of the 14 batters he faced.

Meanwhile, his offense staked him to a 3-0 lead thanks to RBIs from Lind, Bonds and Bell

The sixth inning did not start well for Miller.

He allowed the first three batters to reach and was then pulled in favor of Bill Landrum. By inning’s end, the Pirates’ lead and Miller’s hopes for a victory vanished.

“I was going alright until the last inning,” Miller told the Associated Press after the game. “I just choked in the sixth and it hurt us. I couldn’t throw a strike. I had a chance to win the game and blew it.”

Miller went five innings plus three batters and was charged with three runs (all earned) on four hits with three walks and two strikeouts.

Landrum absorbed the loss as the Pirates fell to 10-3.

That was the extent of Miller’s big league time in 1991.

He returned in 1992, going 1-0 with a 2.38 ERA in six games (one start). The following season Miller made his final three big league appearances and posted a 5.40 ERA.

Miller retired in 1994 due to injury. He has gone on to a successful business career, putting the degree he earned at Carthage to good use.

While Carthage, a Division III power, has had 16 players play professionally, Miller remains the only product of the program to reach the bigs.