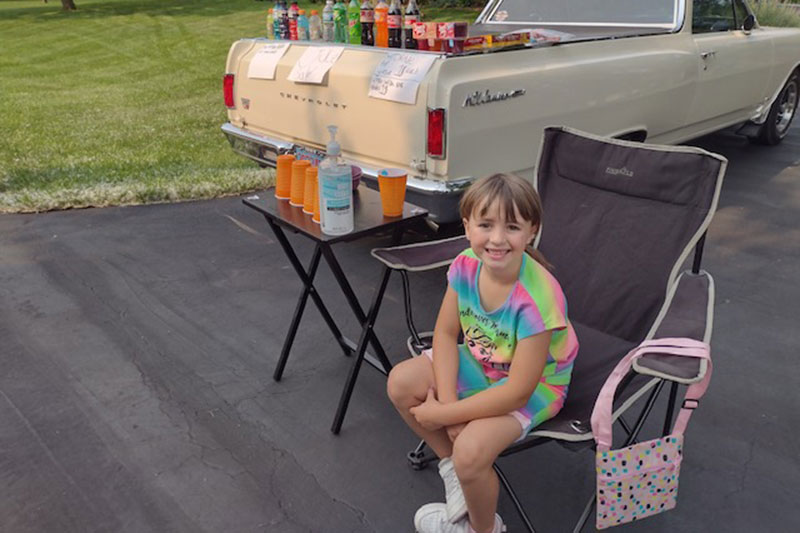 Kenoshan of the Week: Madison Babel

Madison Babel was a busy little girl on Monday, July 19.

The cheerful soon-to-be 7-year-old set up shop at the end of the driveway of the Pleasant Prairie home of her grandparents, Mel and Shirley Babel, and went to work.

From 8 a.m. to 4 p.m. on a warm day, she sold Gatorade, Powerade, water, a variety of sodas, Snack Pack juicy gels and other snacks to customers who spotted her along 11th Ave.

“She was out there all day,” said Stephanie Suiter, Madison’s mother.

Whatever you do, don’t refer to Madison’s business as a run-of-the-mill lemonade stand.

“It’s not called a lemonade stand,” the first grader corrected.

For the second year in a row, Madison had special plans for the proceeds of her “Juice Sale.”

Last year, she raised $140, and the money went to school supplies for those in need.

And what was the inspiration for her second sale?

This year, she decided that the proceeds would go to the Pleasant Prairie Police Department’s K-9 unit (after she kept a little of the hard-earned money for herself).

Highlighting her busy day was a visit from some special customers – members of the Pleasant Prairie Police Department, including Chief David Smetana.

On Friday, July 23, Madison returned the favor by visiting Smetana at his place of work and presented him with a check for $220 along with $26 in cash.

“I think it’s awesome that somebody who is of that age and limited experience is thinking about other people first,” Smetana said. “Madison really stepped forward last year, too.

“It’s a neat family and you can see where she gets that community-mindedness from. It’s a trait that we see regularly in the village, but it’s very nice to see.”

Madison, who said she wants to be a teacher when she grows up, has been selected as the Kenosha.com Kenoshan of the Week.

“Chase is a dual-purpose dog, which means he can do apprehension work and detection work,” Smetana said. “He’s trained on a variety of narcotics and item searches, too. We can set him loose in a field and he can find discarded items for us as well as firearms.

“They train on a daily basis, and they do more formalized training monthly.”

Madison’s donation was much appreciated – just like all the treats and goodies that the department receives from families.

“It’s heart-warming to the officers,” Smetana said. “It bolsters what I tell them on a regular basis that we have a great deal of community support.”