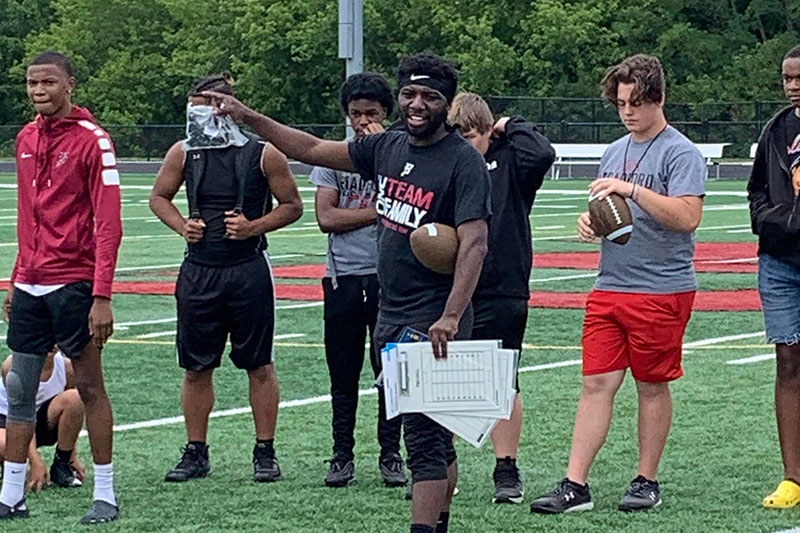 Kenoshan of the Week: Terrell Jones

A few months ago, Terrell Jones was reminiscing with some friends about growing up in Kenosha. Some of his favorite memories centered around events sponsored by the CYC and different after-school programs.

“The kids don’t really have that now,” the 24-year-old said. “I just got tired of complaining about the lack of resources, or the lack of things that kids don’t have. I decided to act on it.”

What transpired was the development of Kenosha Diamonds Flag Football – a free clinic/league open to all local children entering grades 3-8. Held on Saturdays from 1 to 5 p.m. at Bradford High School through Aug. 7, Jones attracted 22 participants to the first session on July 10 (although 50 had initially signed up).

Through word-of-mouth and social media, he expects a bigger turnout in the weeks to come.

“I’ve had at least 10 parents reach out to me since the first one,” said Jones, a Bradford graduate who is studying business marketing at UW-Milwaukee and is a member of the Bradford boys basketball coaching staff.

With the blessing of Bradford and permission to use the school’s football field, Jones enlisted the help of some coaches and varsity players with his free flag football endeavor.

“This is my first year doing something like this,” Jones said. “Four months ago, I took my little cousins to Lincoln Park and played flag football with the set that I bought from Dick’s Sporting Goods. It kind of inspired me to do that exact same thing, but on a nice field. I had no idea that it would become this big.

“I put this together just to give back to my community and give the kids something to do in the summer.”

For his outstanding gesture and thinking about the youth of Kenosha, Jones has been selected as the Kenosha.com Kenoshan of the Week.

At the first session, Bradford varsity players led the campers through a stretching warm-up. Later, they were broken up into groups by grade and divided into teams and went over positions, rules and plays. They ended up playing a game with 15-minute halves.

At the end, there were plenty of smiles.

“Next week it will probably be a little bit more structured,” Jones said. “We’ll have them do different drills with the varsity players and get into the games.”

“I’m just getting kids together,” he said. “We’re just out there to have fun and play on a nice field where they can say later, ‘I played on that field before.’ And it’s free. It’s zero dollars. You come out and have some fun. We have snacks. We have water. We have Gatorade.”

As for the name of his newfound organization, it has a special significance to Jones. It is named after his younger sister, Diamond Turner, who passed away at the age of 19 in March.

“She went to Bradford. She had cerebral palsy, so she couldn’t walk, couldn’t talk,” he said. “I just wanted to do something in honor of her … just keep her name alive. I thought the Kenosha Diamonds was a perfect name to go with.”

For more information on the Kenosha Diamonds, email Jones at jones685@uwm.edu. All participants must fill out a medical waiver, which can be submitted through this link.