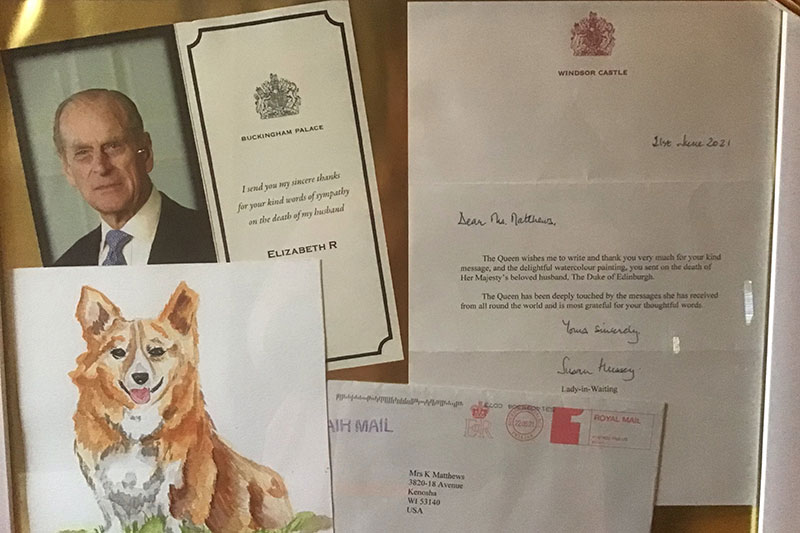 Kenoshan Kathy Matthews must have felt like royalty after she sorted through the mail on what started out as just an ordinary day.

Nestled in the stack was an extraordinary envelope, stamped from Buckingham Palace. It contained a hand-written letter thanking Matthews for a special condolence gift she sent following the death of Prince Phillip Duke of Edinburgh, husband of Queen Elizabeth II, on April 9.

“The letter was written and signed by the Queen’s ‘Lady-in-Waiting’,” Matthews said. “You can guess my shock.”

Matthews has a casual affinity for the Royal Family, which has grown in recent years.

“Their life is so fascinating it has always sparked interest, especially in the weddings and most recently the funeral,” Matthews said. “The series ‘The Crown’ on Netflix also spurred a new love for what the Queen’s life has been.”

Now thanks to her act of kindness and creativity, Matthews has a connection to the royals that will last a lifetime.

Matthews, who retired from KUSD Human Resources four years ago, had been teaching herself to watercolor during the pandemic after in-person classes were halted. She so enjoyed the hobby she started to paint greeting cards for friends and family. That led to online classes where Matthews had learned to paint different dog breeds including a Corgi, the breed often associated with the Royal Family.

Elizabeth II reportedly has been fond of the breed since she was a small child, owning more than 30 corgis since becoming Queen in 1952.

Matthews had just painted the Corgi piece when Prince Phillip passed away.

“I thought why not send this Corgi picture and pass along my condolences to Queen Elizabeth?” Matthews said. “I had very little hopes that she would actually see the picture, yet I had high hopes she would.”

Matthews sent a note with the painting that expressed her condolences for the Queen’s loss, saying “my wish was that maybe seeing my painting of the Corgi would bring a smile to her face if only for a moment.”

Two months later, the acknowledgement letter and Duke’s funeral thank you card arrived in what Matthews describes as “the most royal envelope stamped from Buckingham Palace.”

The note, on Windsor Castle letterhead, calls Matthews’ watercolor “delightful” and says the Queen was most grateful for her thoughtful words.

“I am still flying in the clouds thinking that someone as simple as me would warrant this recognition,” Matthews said.

Matthews artistically framed the letter, funeral card and replica of her artwork, and will display it proudly in her home. She has lived in Kenosha most of her life, growing up in town and marrying her husband Brad and raising her four children Joe, Ryan, Aaron and Sarah here.

Receiving royal recognition marks a high point of Matthews’ long and enjoyable creative journey. She’s always been interested in crafts, and has taken the opportunity to explore her talents using community resources and recommends that to others as well.

“It has brought so much joy to my life,” Matthews said. “My (Kenosha Senior Center) teacher Carolyn Garland has brought out the best in my creative juices. I wish all Kenoshans would take advantage of the most wonderful classes available to them at the Senior Center.”

Matthews continues to branch out, and her art can be seen at the Third Sunday Art Fair at Union Park.

“I have just always loved crafts, one is never enough. I sew, crochet, garden , cook, can and embroider,” she said. “You name it, I will try it. Giving it away to my friends, neighbors and family makes me just as happy as making them.”

Now, Matthews’ creativity and generosity has given a gift back to her.

“It is a pleasure, and this experience has just been a once-in-a-lifetime thrill for me and my family,” she said.