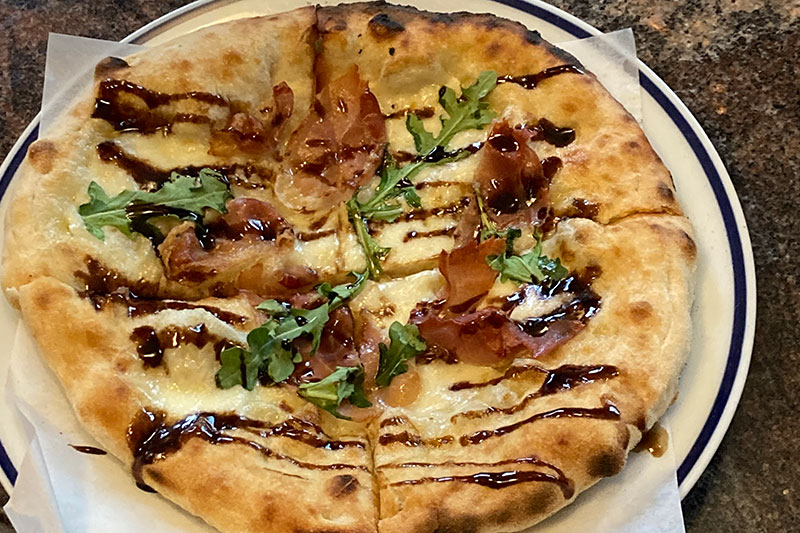 You may not have heard the name Cut Stone Foods yet, but you will. If you haven’t heard the name, you’re forgiven, if you’ve seen their cute red fire truck that’s now a food truck.

The fire truck, dubbed Il Marzocco, began public operations in early-June. From what I know, the menu is primarily pizza and fresh pasta. The pasta, made on the truck, I believe, can include spaghetti, shells, fusilli, farfalle and penne rigate.

The truck is operated by fellow Kenosha.com writer Riki Tagliapietra. In conjunction with the two downtown Saturday markets, the truck has been operating at the corner of 55th Street and Fifth Avenue in the parking lot just east and to the rear of the Rhode Theatre, sometimes sharing the space with The Fresh Bar and Captain Mike’s. Other recent stops have included the Racine Public Library and the Petrifying Springs Biergarten.

I caught up with the operation on June 29 at their pop-up beer garden at the Washington Park Velodrome. For those who don’t follow biking or local history, our velodrome, which opened in 1927, is the oldest continually operating velodrome in the country.

When I got there, about 30 minutes after they started serving, the line was about five people deep and the wait about 15 minutes. This is a pretty high-tech operation, though. They take a cell-phone number and text you when your pizza is ready. They can even text you a receipt — way to master the technology!

The night I went was mostly a pizza menu. Cut Stone sells a nine-inch “personal” pizza with three standard offerings. I got the prosciutto pizza ($13) with olive oil, fresh mozzarella with a scattering of prosciutto and finished with some arugula leaves and an artistic glaze of balsamic vinegar.

The other two pizza offerings were the pepperoni ($11), which I didn’t review, but you can ask my wife about it, along with the classic margherita with just tomato sauce, mozzarella and fresh basil. The basil, by the way, couldn’t be any fresher. Cut Stone had four hanging flower baskets with the herb hanging from the truck, and they just tore pieces off, as needed, to garnish the margherita pies.

The pizza style is Neapolitan. If you read my review of Oakfire Pizza on Green Bay Road a few months ago, you’ll know that the heart and soul of a Neapolitan pizza, or any great pizza for that matter, is the dough. Traditional Neapolitan pizza dough has just four ingredients: flour (traditionally Italian “00”), yeast, salt and water. When cooked, the crust is both pillowy and chewy. It’s soft and elastic in the middle with a large, crusty lip on the edges.

Cut Stone executed the style almost perfectly. The puffy dough had an excellent char around the edges, but I wish it would have had more than a very minimal char on the bottom. I quibble, because the crust was really good. It was yeasty, doughy and pillowy with a great chew, although it could have used a touch more salt.

The prosciutto was excellent, a little salty, as it should be, and its time in the wood-burning oven gave it a nice chew of its own. Truth be known, I could make a meal of the prosciutto. Cut Stone could have been just a little more generous with the arugula. Now I’ve had pies in Chicago “garnished” with arugula, which sometimes translates into an entire salad sitting on top of my pie. I don’t need that much, but a few more pieces would have been good.

The key to the kingdom was the balsamic glaze. Balsamic vinegar is sweet, but the sweetness of the vinegar not only helped cut the saltiness of the ham, but it really added a whole other flavor profile to the pie that wouldn’t have been there without it. I already mentioned the lack of salt in the crust, and a little more would have really accentuated the salt/sweet interplay that the balsamic provides. I don’t think I’ve had a pizza before with a balsamic glaze. In excess, balsamic can overpower everything it touches, but Cut Stone’s pie is perfect example of how a judicious use of the product can alter the landscape in an exciting and positive way. Brilliant.

All in all, an excellent pizza and one that I could get used to eating on a regular basis. Maybe Saturday when they return to 55th Street.

Also on the limited, weeknight menu were macaroni and cheese ($8), made with homemade shells, and pesto pasta salad (also $8), using more of that beautiful fresh basil. There’s a limited beverage menu which includes a beer or two. Cut Stone serves a larger menu on its weekend stops, I believe.