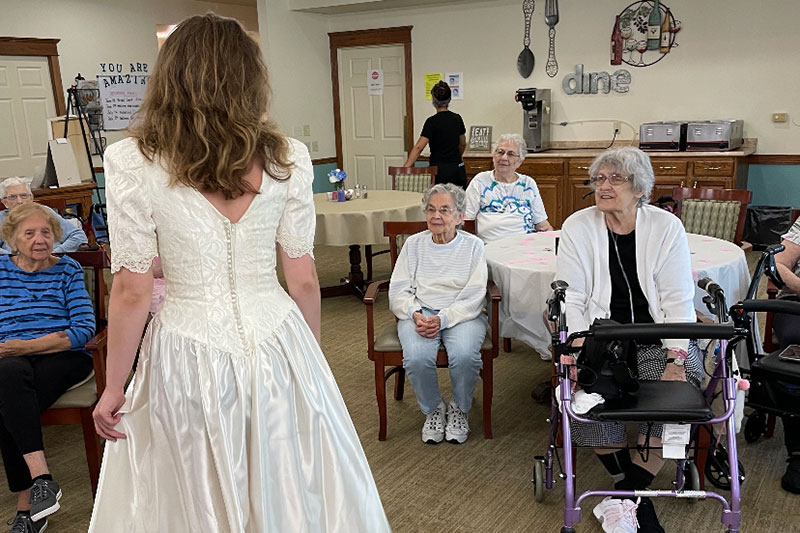 Library Terrace Assisted Living residents and staff brought back the joy of long-ago wedding celebrations with a Bridal Showcase, incorporating the ingredients of a perfect day: Something old, something new, something borrowed, and something simply wonderful.

Life Enrichment Coordinator Lanna Luzar’s idea for a fun activity blossomed into a bouquet of memories as residents shared their photos, gowns and stories earlier this week.

“You could  just see it in their eyes, they just melt when they talk about their wedding day,” Luzar said.

The event featured Library Terrace residents’ wedding photos and mementos, displays of gowns and bridesmaid dresses of earlier eras, a fashion show, and a one-of-a- kind cake. Residents couldn’t wait to share memories about their weddings, as their photos brought them back to some of their happiest times, Luzar said.

Kay Holtz’s smile matches the one beaming from the photo of newlyweds Mr. and Mrs. Roth Holtz emerging from a Glencoe, Ill., church in August 1947. The Holtzes met at Kay’s sister’s wedding shortly after Roth returned from his service in France and Germany in World War II. The Holtzes’ honeymoon plans weren’t derailed by the fact that they didn‘t own a car. The newlyweds took a train to a state park in Illinois and went camping for a week.

Just months before Roth passed away in December 2020, Luzar found a way to honor the Holtzes’ 73rd anniversary with a special anniversary meal.

“Even when we were in shutdown, I threw them their own private party,” Luzar said. “They got to go in the lounge and we catered a meal from Gerhard’s because it was their favorite place.”

Longtime Kenoshans may remember Model Market, but most probably don’t know how Rose Marie Del Frate joined the well-known family. For some time before the wedding, Ron Del Frate’s parents didn’t know the high school sweethearts were getting married. “She told us the story of how he didn’t tell his parents that he wanted to get married to this beautiful girl.”

Obviously, it all worked out, as shown by Rose Marie’s photo of the entire wedding party from their November 1954 wedding. Ron Del Frate passed away in 2019.

Irene Shawler’s wedding memories were beautifully preserved by her daughters in a scrapbook that included a wedding portrait of Irene and John Shawler and their original invitation:

Request the honor of your presence

At the marriage of their daughter

On Saturday, June the twenty-second

“She is just so grateful to get this memory book from her daughters because she has it forever,” Luzar said.

Irene’s husband was a Marine who served in WWII from 1941-45. Soon after the war ended, John was at Great Lakes Naval Base awaiting his discharge when he met Irene at a dance.

“Irene is 96 and looks pretty darned good,” Luzar said, adding that Shawler used to golf until about seven years ago.

Even those who couldn’t recall every detail were moved by the chance to display their treasured photos.

Florence Wieske told staff that she couldn’t remember much about her wedding at Grace Lutheran Church but her memories of her husband are vivid.

“She said, ‘My husband is so handsome, I miss him so much.’” Luzar said. “She was truly in love, and she was so proud to bring that picture.”

Charlotte Prothero proudly displayed a tiny frame with a photo of her 1957 wedding to her late husband Edwin Prothero, also a WWII Navy veteran.

Prothero offered a quip that Luzar said is in keeping with her personality: “I’m a small lady and this is a small picture, but I was happy,” she said.

The event also gave residents and staff alike a chance to showcase their talents along with their cherished memories.

Delora English sketched her dream dress for her 1954 wedding to her husband Richard, then had it made exactly as she drew it up. The result was the stunning gown shown in her bridal portrait.

“She designed that dress herself, it’s all silk,” Luzar said, pointing out the unique bodice and jaw-dropping train. One of English’s daughters also wore the custom-made gown.

When it comes to “something new,” both the young people involved with the party and the special occasion cake fit the bill.

The cake was made by Library Terrace chef Analis Gonzalez, incorporating layers of chocolate, red velvet and yellow cake to make sure everyone could have their favorite flavor.

“She is only 22 years old and she has never made a wedding cake before, and she did an absolutely wonderful job,” Luzar said. “She just jumped at the chance and it was beautiful.”

Adding to the storyline is that Gonzalez, one of the youngest people at the party and most recent staff member at Library Terrace, is also newly engaged.

A niece of one resident served as an engaging, energetic model in the fashion show. Crystal DiBiase, who just finished her freshman year at Notre Dame, gave her time to model dresses representing different eras.

Staff member Etorial Hill recently renewed her vows with her husband of 55 years and was thrilled to model the dress she wore at their renewal ceremony in Florida.

Even the serving pieces added layers to the festivities. Luzar brought a candle and cake knife from her own wedding, the cake topper came from the Library Terrace’s marketing director’s wedding. Staff contributed to decorating a nuptials-themed tree and gave the tree topper to Gonzalez as an engagement gift.

“We all contributed and it was just so much fun,” said Luzar. She added that although the glasses were from the Dollar Store, they were used for champagne so that was special, too.

The sign of a great wedding party is that no one wants to leave. That’s exactly what happened at the Library Terrace event.

“We had to end the program at some point, but they still wanted to tell and show more,” Luzar said. “So we displayed all the pictures so residents had several days to look at all the photos and dresses up close.

“They wanted to see all the detail and all the different styles throughout the years. There’s something about a wedding dress, no matter what bride wears it, they all look just glowing.”