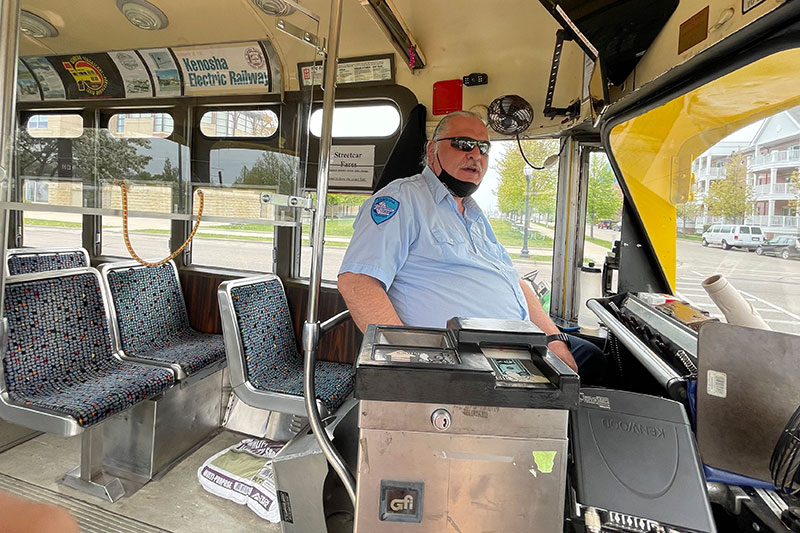 Kenoshan of the Week: Robert Cis

Streetcar driver goes above and beyond for wedding couple

A streetcar driver for Kenosha Area Transit, Robert Cis was wrapping up an otherwise uneventful shift navigating the two-mile loop on Saturday (May 15) when his night became far from ordinary.

While stopped at an intersection, Cis spotted something in the middle of the tracks that caught his attention.

Upon closer inspection, it was a sealed Hallmark card. It was addressed simply to “Kaily and Nick.”

“If I would’ve found it in the streetcar or on one of the buses, it would’ve been really simple,” Cis said. “I would’ve turned it into our lost and found. If I had done that with this, though, these people never would have found the card.”

So, after he returned the streetcar to the garage for the night, Cis embarked on a personal quest to find the card’s rightful owners.

“During my shift, I noticed that Ashling on the Lough had some kind of party or reception going on,” Cis said. “I thought I would run it over there and see if it was Kaily and Nick’s party. I’d just give it to them and be on my way.”

Unfortunately, Kaily and Nick were not at Ashling.

The bartender told Cis that there was another wedding reception taking place nearby at Madrigrano Marina Shores.

Once again, no dice.

Now, keep in mind, that Cis admittedly experiences discomfort with his legs. On a busy Saturday night downtown, he had to park a couple of blocks away from each destination only to come up empty.

“In retrospect, it was kind of funny,” he said with a chuckle.

After returning to his car from Marina Shores, Cis had an idea.

“Just for the heck of it, I Googled ‘Kaily and Nick in Kenosha’ and their wedding plan popped up,” he said.

Newly married Nick and Kaily Moss were holding their wedding reception at Upper East, not far away on 58th St.

Bingo! Cis was on his way.

“Of course, I got there and there was no parking and I had to walk another block,” he said, chuckling again. “I got to the door and went inside. I figured I would give it to them and be on my way. Instead, there was this huge flight of stairs. Me and stairs don’t agree.”

Once he found the happy couple, he delivered the card and offered his congratulations.

Naturally, Nick and Kaily Moss, who had a one-year delay to their wedding day, were appreciative.

“As we were eating our dinner, a gentleman walked across the venue and approached my wife and I,” Nick Moss said. “As he was wearing a City of Kenosha Transit jacket, we immediately had some concern for what it could be about.”

When handed the card from Robert well after his streetcar shift ended, Nick and Kaily were given a quick story about the card and its journey.

Once the card was opened, they found out who it was from. It turned out, the guests said they had lost the card somewhere between the venue and the Wyndham Garden Kenosha Harborside where they were staying.

“My wife and I were absolutely stunned,” said Nick Moss, who is a firefighter/EMT with the City of Kenosha. “Robert could have easily ignored the card in the tracks or taken the gift of money inside for himself, but instead he selflessly gave up his personal time to seek us out.

“I believe this goes to show the level of kindness and integrity that Robert has. Robert made me proud to be both an employee and a citizen of this city with his actions.”

For going above and beyond and providing a memorable moment to the Moss wedding day, Cis has been named the Kenosha.com Kenoshan of the Week.

Cis downplayed his actions and tried his best to duck out of the spotlight.

“It wasn’t a big deal … it really wasn’t,” he insisted. “My reward was just being able to put it back in the hands that it belonged. I’m happy with that.

“We all have to have faith in humanity. There’s a lot of good people out there.”

Cis, a Kenosha resident for nearly 35 years, has worked for Kenosha Transit for 2½ years after previously working in the printing industry.

He enjoys his job as a streetcar driver and taking passengers on a tour of beautiful downtown.

“It’s really rewarding,” Cis said. “Some days can be kind of slow and kind of boring, but when the children get on it makes it all worth it. They have big smiles on their faces and they look forward to going for a ride. It’s really heartwarming.”