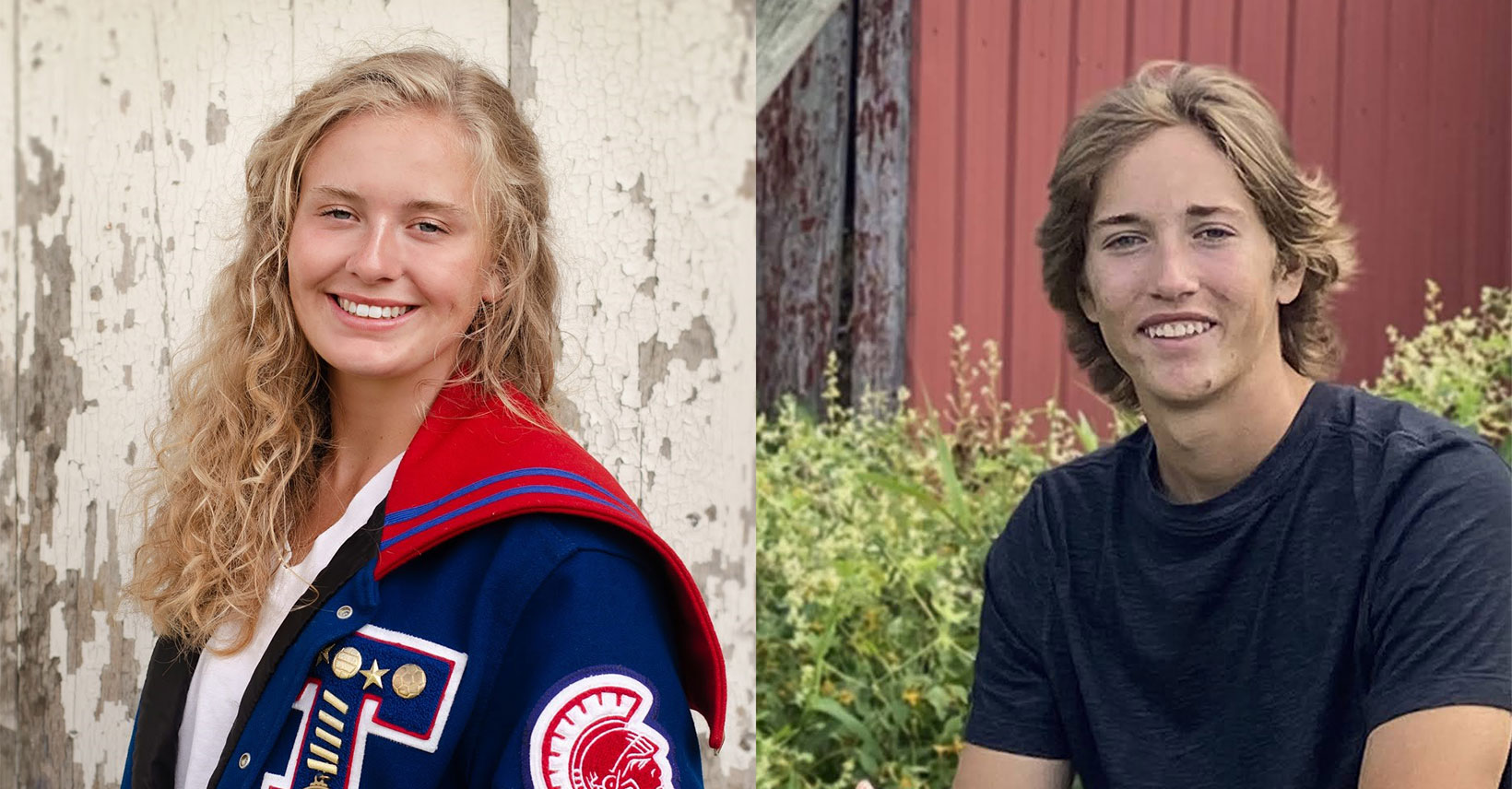 Kenoshans of the Week: Brooke Clements and Sawyer Smith

The most impressive thing about Tremper senior Brooke Clements and Shoreland Lutheran senior Sawyer Smith is not how they performed on the basketball and volleyball court, or the baseball, football and soccer field. Instead, it is how they valued their time.

Clements and Smith did not waste a single moment. When all is said and done, they can say they got the absolute most out of their high school experience.

Recently, the senior standouts were selected as the Holy Rosary Sports Night Outstanding Athletes of the Year and the recipients of the Alan Ameche Award and the Turco/DeSimone Scholarship.

Despite the popular banquet being cancelled this year because of the pandemic, the 10-person Sports Night Committee still got together to deliberate. Each Kenosha County school submitted a male and female nominee and Clements and Smith emerged with top honors.

To recognize the dynamic duo even more, Kenosha.com has named Clements and Smith as the Kenoshans of the Week.

Here is a closer look at each Holy Rosary winner:

A varsity performer in basketball, soccer and volleyball since her freshman year, Clements also handled the kicking duties for the football team last fall and went 5-for-5 on extra-point attempts. During a game against Franklin, Clements was named the Homecoming queen at halftime and helped tackle a kickoff returner in the second half.

Clements, the daughter of Michael and Becky Clements, has served as a two-year captain in her three main sports and has earned team MVP honors in basketball and soccer.

“Brooke is someone who demonstrates a strong sense of confidence, is a hard worker and has a great attitude in whatever she is doing,” Tremper girls basketball coach Lynell Collins said.

Even if she didn’t play a single sport, Clements would still boast an incredible resume.

A four-year member of Tremper Student Government and three-year member of Tremper Golden Strings, she is also a member of the National Honor Society, Renaissance Club and Future Business Leaders of America. Clements has been a first chair violinist in the Tremper Symphonic Orchestra for three years and has been a two-time recipient of a 1 rating for a violin solo in the State Solo and Ensemble Competition.

“Brooke is one of the most involved students I have ever had the pleasure of dealing with in my 26 years at Tremper High School,” Tremper soccer coach and student government advisor Todd Hardy said. “I know the commitment that I ask of my soccer players and government members, and she not only meets those, but exceeds it.

“Brooke is a leader who sets a great example for others to follow. The girls on the team follow her leadership and respect the effort she puts forth every day.”

In March, Clements was one of five area students to receive a Good Citizen Award from the Kenosha Chapter of the National Society Daughters of the American Revolution.

Her long extra-curricular and civic list also includes being part of the music group and The Giving Circle at St. Mary Catholic Church, serving as a lifeguard at the Anderson, Washington and Kenosha Country Club Pools and serving as a mentor to the Lance girls basketball team

“Balancing academics, sports and music throughout high school is challenging and she has excelled in all three areas,” St. Mary music director Theresa Setter said. “Above and beyond that, her commitment and community service to the church is highly commendable. She comes with enthusiasm to play her violin; she is an asset to our musical ensembles. I have enjoyed watching her grow as a musician and in her faith.”

As for the future?

“I plan to continue my education and soccer career in college at Bryant & Stratton College,” Clements said. “I hope to study criminology or forensic investigation and begin a career as a homicide detective or forensic analyst.”

A varsity performer since his freshman year in baseball (when he was named team MVP) and a three-year varsity performer in basketball and football, the 6-foot-4 Smith is the school’s all-time leader in passing yards (2,267) and regarded as one of the best kickers in school history in football and is one of the all-time leading scorers in school history in basketball with more than 1,000 points.

That doesn’t even include baseball. Longtime coach Tim Mielke called Smith “one of the very best to ever put on a Shoreland Lutheran baseball uniform.”

Smith, the son of Shad and Kristen Smith, is a left-handed hitting middle infielder and pitcher. Tabbed as an All-District player by the Wisconsin Baseball Coaches Association as a sophomore (his junior season was cancelled due to COVID-19), Smith was ranked as a top-60 recruit in the state by Prep Baseball Report.

“Outside of his athletic endeavors, Sawyer demonstrates a servant leadership quality that is different from the average teen,” Mielke said. “I have personally seen him in many different contexts not only demonstrate the characteristics of a highly effective leader, but I have also seen how he puts the good of his peers, his teammates and his school above others. His passion, optimism, self-discipline and humility contribute to the positive climate of our school.

“The world needs more people like Sawyer who have a clear sense of purpose and who can look beyond themselves. His volunteer efforts in our school and in the community underscore his strength of character.”

A member of the National Honor Society and a Pacer Ambassador, Smith also boasts a long list of extra-curricular work, volunteering his time at the school’s Pacer for a Day, Fall Open House, Blood Drive, Passport Presentation and Tip-Off Tournament events.

“For all his athletic exploits, Sawyer is also a terrific student leader and a genuine pleasure to be around,” Shoreland football coach and admissions director Paul Huebner said. “It has been a joy and a privilege to work with him in football and in the classroom.”

As for the future?

“When I am done playing baseball, I would love to start my own business that would make and sell baseball equipment and apparel. I want to make a career out of sports so that I can stay involved in the game I love.”