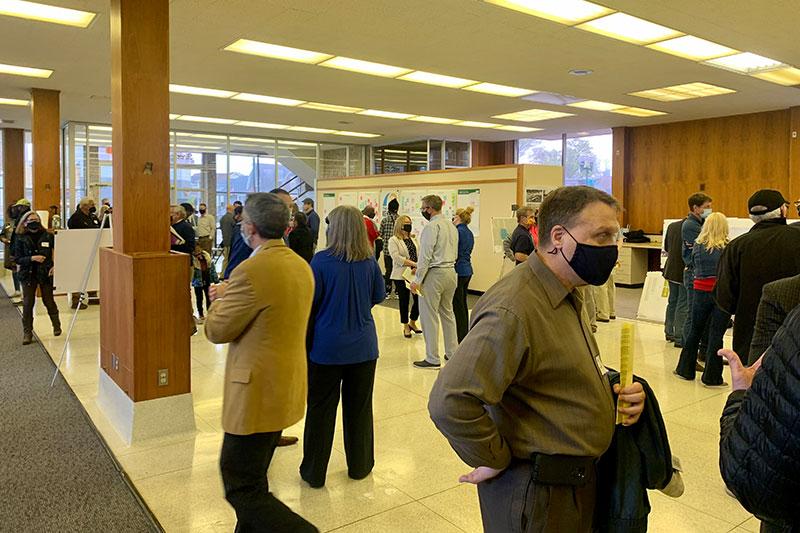 The event, held in the former Brown Bank building at 2222 63rd St., provided an early opportunity for area residents to voice their hopes and concerns regarding the massive project.

The city is developing a master plan for the proposed neighborhood which encompasses the 107-acre former Chrysler site between 52nd and 60th Streets. City officials expect the proposed upgrades to foster neighborhood opportunities in education, workforce training, entrepreneurial development and job placement.

“It was a very nice turnout, and I’m pleased with all the people who came out to see the plans and provide input,” Mayor John Antaramian said. “I’m very pleased. Most people have been very excited about the concept. We have a ways to go, but the next steps will be putting this together in the master plan.”

The city recently announced it commissioned SmithGroup, an integrated design and engineering firm with offices in Milwaukee, Madison and Chicago, to develop the master plan. The firm also will complete engineering and construction documents for the first phase of development.

“We want to introduce to the neighborhood the ideas which are part of the design phase,” landscape architect Ujijji Davis Williams said. “A lot of people are interested in the future of the site. … We’re asking people to vote on the values and priorities based on what it means to live in the neighborhood.”

Attendees were asked to “vote” on proposals for streetlife, “neighborhooding,” lifestyle, culture and economic outcomes by placing green stickers on ideas they liked.

For example, the streetlife proposal for improved accessibility received more stickers than the “smartstreets” proposal, which could include digital design solutions.

On the subject of culture, a proposal for increased community festivals and local programming received more stickers than a public art proposal.

Veronica King, who serves as president of the Kenosha branch of the NAACP, said affordable housing must remain front and center. She appreciated the opportunity to make her concerns known.

“Affordable housing for me is most important,” King said. “That’s where the priority is. I understand green space, public safety, the environment, let’s start with the basic needs.”

Another community meeting will be held next month. The date has not yet been determined.