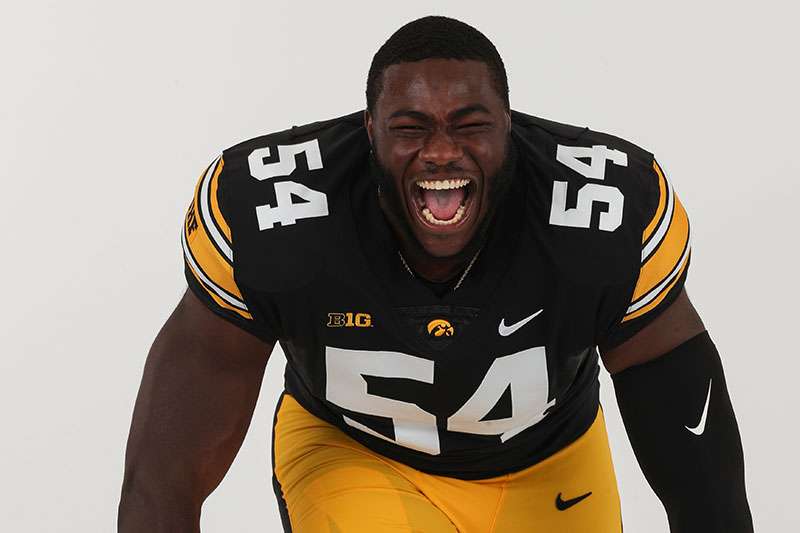 Indian Trail graduate Daviyon Nixon, a defensive tackle out of the University of Iowa, is projected to be selected in the first three rounds of the NFL Draft.
PHOTO: UNIVERSITY OF IOWA
Kenoshans, Local, Sports

*THE SKINNY: Nixon is a 6-foot-3, 304-pound defensive tackle out of the University of Iowa who is generally projected to go early in the NFL Draft.

“I thought maybe at one point he could jump into the first, but that’s not going to happen the way it looks right now,” ESPN draft maven Mel Kiper Jr., said last month. “I’d say at worst a third-rounder, and he could maybe be a (second-rounder).”

*ON THE AIR: Thursday’s first round starts at 7 p.m. and will be televised by ABC, ESPN and the NFL Network. … Rounds 2 and 3 will start at 6 p.m. Friday and rounds 4 through 7 will start at 11 a.m. Saturday and will be carried by the same three networks.

*WHERE’S DAVIYON: Nixon will spend the first night of the draft in Iowa and the second night in Kenosha with family, according to a FOX6 Milwaukee story.

*RATING: The Athletic had Nixon listed as the 81st-best prospect in the draft in a recent article.

“Nixon has a basketball background and plays with the quickness/control to shoot gaps and the power/leverage to defeat blocks,” wrote The Athletic, which had Nixon going at No. 29 overall in a March mock draft. “He has an unimpressive sample size with single-digit career starts, but his improved focus over the last two seasons is something his coaches have told to NFL scouts. Overall, Nixon is still maturing in areas, but he creates disruption with his explosive traits, play violence and ball-tracking skills. He projects as a one-gap penetrator with starting ability.”

*MOCK REPORT: In the lead-up to the draft, Nixon was predicted to go as high as No. 10 to the Dallas Cowboys while a recent article had him going 44th to the New York Giants.

Here’s a look at where some recent mock drafts have Nixon going:

It should be noted some mock drafts don’t have Nixon going on the first three rounds.

In his breakout redshirt junior season, Nixon started all eight games at defensive tackle and recorded 45 tackles (22 solo). He also posted 13.5 tackles for loss, 5.5 sacks, one forced fumble, one pass break-up and one interception.

The pick was an athletically spectacular 71-yard return for a touchdown at Penn State that really raised his profile. You can watch a highlight of the play here.

*THE HONORS: Nixon totes a briefcase full of honors to the draft.

*THE HISTORY: The last Kenoshan selected in the NFL Draft was Bradford’s Melvin Gordon, a running back at out of Wisconsin, at No. 15 by the Chargers in 2015. Harborside’s Trae Waynes, Gordon’s Bradford teammate, was the 11th pick in that draft by the Vikings as a cornerback out of Michigan State.

Note: This story was updated to add Joe Cerne to the history section