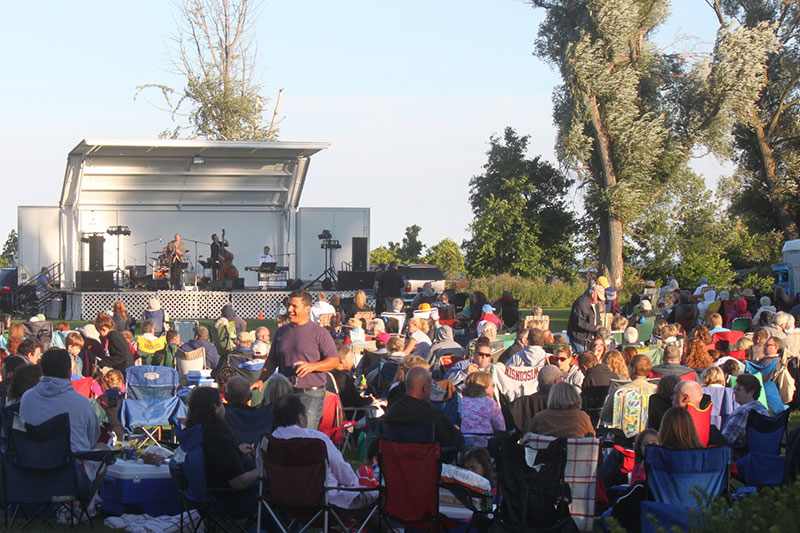 Twilight Jazz is returning to the lakefront.

The popular free outdoor concert series will take place every other Tuesday evening beginning June 29 and ending Aug. 24. The series, organized by the Anderson Arts Center, will be held on the south lawn of the historic Kemper Center, 6603 Third Ave.

The five-night series features notable and regional jazz bands who perform for a few hours for hundreds of area residents and tourists. It’s now in its 18th year.

“We see people from northern Illinois and up north of us past Milwaukee,” said Rena Lee, administrator of the Anderson Arts Center. “It’s a fun regional event for everyone. It’s beautiful with the colors bouncing off the lake and the sun set.”

Attendees may bring their own blankets or lawn chairs when the grounds open at 6 p.m. on concert days. Food and drinks, including wine and beer, will be available for purchase. However, no carry-ins of alcohol are allowed. Families are welcome to bring their own picnic baskets.

Lee said the concerts are perfect for first dates and family parties.

“It’s something to look forward to,” Lee said. “It’s a nice night out. Get some fresh air and hear some good music. It’s one of Kenosha’s most anticipated events. It’s right on the lakefront, we have Lake Michigan in the background.”

Last year, because of the COVID-19 pandemic, the center only hosted four shows. Attendees were encouraged to socially-distance with spray-painted and marked areas on the grass and frequent numerous handwashing stations. Only about half the amount of normal attendees showed up.

Lee hopes this year is far more popular with more than 600 attendees per show.

“We are hoping to go back to normal but will be taking safety precautions for COVID-19,” Lee said. “We want families to know that if they come here they’ll be safe.”

Because vaccines continue to roll-out throughout the region, Lee said such precautions may change to allow more movement “now that everyone’s feeling safer.”

“She was here last year and everybody raved about her and her music and energy,” Lee said. “We wanted to bring her back.”

New York Magazine has described her as a “sultry vocalist with a vast repertoire of jazz, blues, and standards … with some Bob Dylan thrown in for good measure.”

The final concert on Aug. 24, the Kenosha County Suffrage Celebration, will be the largest one, with multiple food vendors and other activities such as raffles. It will start at 4 p.m. with two acts: Ivy Ford and Elaine Dame.