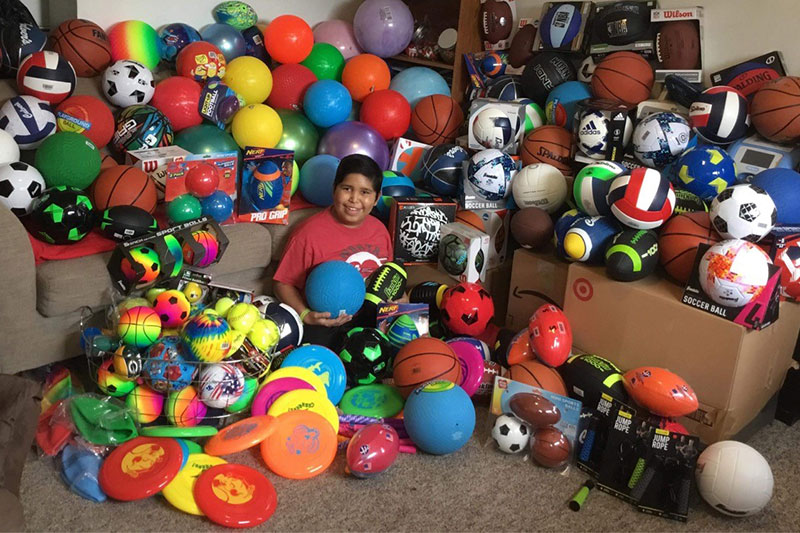 Lincoln Middle School eighth grader Manny Rios recently collected 225 sports balls, Frisbees and jump ropes as part of the American Heart Association’s Bring a Ball to the Ball initiative. The items will be donated to schools and organizations in need of playground equipment.
Kenoshans, Local

Kenoshan of the Week: Manny Rios

Heart transplant recipient is a top-notch volunteer for the AHA

Manny Rios is not one to shy away from a challenge.

The Lincoln Middle School eighth grader received a heart transplant on June 17, 2017. Since then, he has served as an ambassador and volunteer for the local chapter of the American Heart Association.

As part of the organization’s recent Bring a Ball to the Ball initiative, Manny collected a whopping 225 sports balls, Frisbees and jump ropes, which will be donated to schools and organizations in need of playground equipment.

After falling short of last year’s goal of 50 items, Manny wanted to step it up in 2021.

He quickly crushed his goal of 60, but he had no intention of slowing down.

When the fundraising drive ended, thankful AHA workers picked up the awesome donation.

And Manny was able to duplicate a classic slapstick comedy routine on the lawn in front of his house on a recent sunny Saturday afternoon.

Seated in a chair, apprehensive Grandma was up first.

“I’m so sorry!” Manny said before delivering his first pie of the day.

Soon it was Miranda and Anna’s turn.

If you want a good laugh, check out expert pie thrower Manny Rios in action here. A couple of weeks earlier, Manny was the first in the family to receive a pie in the face, courtesy of his sister, after reaching his initial goal of 60 items collected.

As a result of Manny’s superb volunteer work, and smashing his goal in the process, he has been selected as the Kenosha.com Kenoshan of the Week.

“Whether famous or not, everyone who meets Manny is inspired by his story and cheerful spirit,” said Laura Marran, who was Manny’s 4K special education teacher at Brass Community School.

Born with a life-threatening birth defect called hypoplastic left heart syndrome – or half a heart – Manny became a local celebrity well before his transplant. Nicknamed “Mayor Manny” in elementary school due to his outgoing and friendly nature, his star status has continued to shine after his transplant.

“His heart is doing very well,” Anna Rios said. “He’s definitely more active. There are still a few little lung issues, but he seems to be doing really well with it this year.”

Manny’s volunteer efforts go beyond collecting playground equipment. He has been setting an example by being active in the community with a variety of good deeds. Really, he just enjoys being one of the guys.

“He always tends to gravitate toward the adults,” his mother said. “I think it’s from being in the hospital. He always finds more interaction with them. The older people are having more fun. He just finds it a good time.”

As for next year’s Bring a Ball to the Ball, Manny has already set his sights on a new goal.