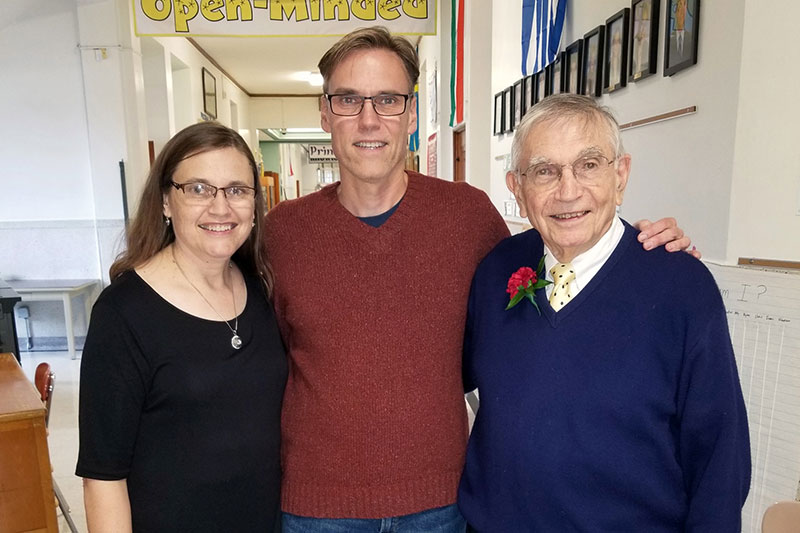 Sometimes the best way to build our future is to take a piece of our past with us. For the Setter siblings, that meant letting a spark of their father’s passion for his career inspire where their own paths would take them, whether they realized it at the time or not.

Roosevelt Elementary School library media teacher Susan Setter Sheard attended kindergarten at the school as a child because her father, Edwin Setter, was teaching fifth and sixth grade and it was a convenient arrangement for the family.

“I thought it was pretty neat that I got to go to school with my dad every day and be ‘Mr. Setter’s daughter’ around Roosevelt,” Susan said. “It was fun going up to his classroom after school and talking with his students or playing in the gym.”

While Susan’s younger brother John was never a student at Roosevelt, he also had fond memories of walking there after school to wait for his father for a ride home. While waiting, he and a friend often snuck off to explore the historic building’s tunnels, basement and attic. Decades later, John now finds himself exploring those school spaces for a living.

John is a project architect for KUSD and was taken by surprise when the opportunity for his position arose following a retirement.

“At the time, I was not even considering a new job or even a career change,” said John, who had spent 12 years working for Partners in Design Architects and, coincidentally, completed more than 70 projects with KUSD. “After thinking about the position and the working knowledge I had of most of the KUSD buildings, I realized that the job was a good fit for me.”

John’s role with the district is to keep the buildings in good working order to ensure future generations of students have a safe, clean and welcoming learning environment.

“Schools are the common thread in a community that unites generation after generation of people,” John said.

As lifelong residents of Kenosha, Edwin and his wife Helen have always been great resources for the city’s history. They also experienced life-changing events, such as the Great Depression, World War II and more. In fact, prior to his teaching career, Edwin served in the U.S. Army, was deployed to Japan, and attended the War Crimes Tribunal while he was in Tokyo in 1947.

That history also played a large part in keeping these generations of Setters inspired and passionate about the work they do each day. Among the historical knowledge Edwin and Helen possess, the simple love and appreciation for all things history is also something he has passed down to their children and grandchildren.

Susan helps with the school’s Safety Patrol – something her father led during his tenure there – and is an unofficial historian of the school, serving on the Roosevelt Anniversary Celebration Committee that organizes celebrations for the school’s milestone anniversaries, which also happens to mark the age of her father who spent 30 years of his teaching career at the school. Edwin was born Oct. 23, 1928, and Roosevelt was dedicated on Oct. 5, 1928.

One of Edwin’s most memorable accomplishments at Roosevelt was in the form of a compliment from then-principal Lyle Jacobson, when he said, “Everyone should have an Ed Setter at their school.”

Edwin also was recognized with Distinguished Service and Elementary Teacher of the Year awards. John and Susan have seen their father’s impact first-hand and are humbled by how many still remember him as a wonderful teacher.

“It’s a unique experience working at an organization where I can talk with people who know my father as their former teacher or colleague,” John said. “I can really see the influence my father has had on so many people in Kenosha.”

For Susie, her father’s contributions directly influenced her pursuit of a career in education.

“You could say it was a natural choice,” she said. “When I hear comments about my dad and know the positive impact he had on so many students, it motivates me to be the best I can be for my students today.”

Susan began her teaching career at St. Mary’s School before pursuing a master’s degree in Library Information Science and got her first library position at Bain School. Shortly after, she jumped at the opportunity to fill an opening in the library at Roosevelt to be back in the building where her father had built his legacy.

“I hold a special affection for the history of Roosevelt School, because it’s been a large part of my family’s history,” Susan said. “I am very proud to follow in my dad’s footsteps. He is my greatest role model as a teacher.”

While John admittedly wasn’t intending to pursue a career with KUSD when he became an architect, he now serves as a historian of the school buildings and enjoys incorporating historical references in his designs and renovations. For example, during the Nash Elementary School project, John worked closely with Vince Ruffolo, who was a member of the Kenosha Nash Car Club, to include historical references that are located throughout the school. John designed the mural that hangs in the Nash lobby which includes many historic images provided by Vince. The building design also includes the Nash emblem on the outside of the building, used many of the Nash car colors in the building’s paint scheme, and even facilitated an actual Nash Metropolitan automobile into the library to illustrate the significant role Charles Nash and the spirit of the auto industry played in the history of Kenosha.

Additionally, John has been involved in many restoration projects throughout the district, including the replacement of Roosevelt’s windows, which are now energy efficient and “brought back the original beauty of the building,” Susan said.

While Edwin never thought John’s architect career would land him in a career with the district, he has great respect for the work his son does in preserving the history of the schools and being a part of the district’s growth. Additionally, he has great pride for his daughters, Susan and Theresa, who both earned degrees in education from the UW-Whitewater, his alma mater, and pursued the “rewarding field of teaching”. Theresa’s contributions as the pastoral musician at St. Mary’s Catholic Church supplements those of her siblings as they all work to serve the community they love.

“I know my children are making a positive impact in the work they do,” Edwin said.  “Teaching has its challenges but so many more rewards. My children, as well as I, know that being a part of the Kenosha Unified school system is a very satisfying and rewarding experience. … It gives you an opportunity to impact the young lives of so many. I am proud that my children feel the same way.”