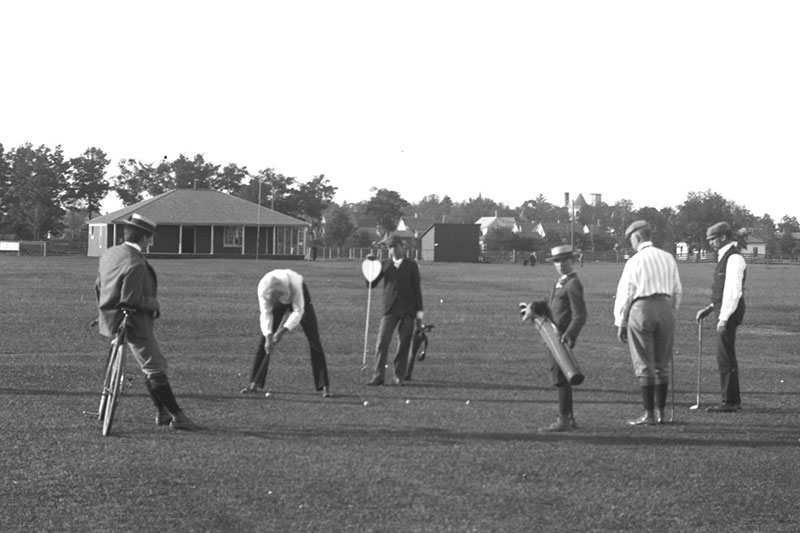 A golfer putts as others look on at the Kenosha Golf Club, later reorganized as the Kenosha Country Club.
History, Local

Once upon a time, Allendale was a destination for golfers

Originally the Wayside Club, the Kenosha Golf Club got its start in 1896 and was later reorganized as the Kenosha Country Club

Ever wonder why Fourth Avenue stops at 60th Street and never reappears as you’re traveling south?

Never thought about it? I don’t know the whole story, but the partial answer is this: There used to be a golf course between 68th and 75th Streets in the neighborhood now known as Allendale.

Not just any golf course either, but the first home of the Kenosha Country Club.

The Kenosha Golf Club, originally known as the Wayside Club, got its start in August 1896 with a small course on the Marr family farm, along the Kenosha-Lake Geneva plank road in a town known then as Truesdell.

Now a ghost town, Truesdell had a train station and a post office at the intersection of Bain Station Road and the current Union Pacific railroad tracks just east of 88th Ave.

The Marr farm, which today remains open farm field, was a little west of Green Bay Road, just south of Highway 50, north of 78th Place, just west of 70th Ave. and just east of the Union Pacific tracks that run under Highway 50 adjacent to Menards.

Charles was the son of Nathan Allen, who helped co-found the N.R. Allen Sons Tannery on Kenosha’s near-north side in 1856. Under the subsequent leadership of Charles and his brother, Nathan Allen Jr., the tannery grew to become one of the largest such facilities in the country.

Charles, who retired from the tannery business in 1910, survived the 1903 Iroquois Theatre Fire that killed 602 people.

Unfortunately, he died in 1911 when he fell out of a window at Chicago’s Palmer House Hotel.

The clubhouse was located along the south side of 68th St., at the intersection of Fifth Ave.

In 1903, the club leased an additional tract east of Third Ave. known as the Butcher field and expanded the course to 18 holes. The Butcher field was owned by a very successful poultry farmer named Robert Butcher, and his lakeside property may have also encompassed what was then known as Butcher’s Beach, part of today’s Southport Park.

The club thrived in its Allendale location through the 1910s, even as the city moved south and residential areas began to encroach upon the golf course. Since the club did not own the land, there was probably financial pressure on the Allen estate to develop the property, particularly along Second Ave. on the lake.

When the tract was eventually subdivided by Charles Chester Allen and Ellen Jebb Allen, the latter the widow of Charles Allen Jr., the neighborhood was named Allendale.

In 1921, a group led by Charles W. Allen’s son, Charles Chester Allen, along with an A-list of Kenosha industrialists and business leaders, purchased adjacent farms, totaling 175 acres, in what was then known as Berryville, Wis.

Charles Chester Allen lived at 6305 Third Ave. Serving with him on the committee were four Third Ave. neighbors, all of whom must have enjoyed an easy walk to the links.

Also on the committee and living nearby on 60th St. near Sheridan Road were Zalmon G. Simmons, the founder of Simmons Manufacturing Company and Simmons vice president A.H. Lance.

The tract of land that the Kenosha Country Club purchased today falls within Somers Township and is bordered by 13th Ave. on the east, 22nd Ave. on the west, Third St. on the north and Highway A on the south.

The Pike River runs east and west through the property. At the time the course opened, there was also a Berryville station stop on the Milwaukee-Racine-Kenosha interurban line, a train line that ran between 1897 and 1947.

The course, designed by  renowned golf course architect Donald J. Ross, along with the clubhouse, opened in 1922.

Over the course of his career, Ross designed over 400 golf courses in the United States, many of which are notably acclaimed, historically treasured and have played host to the most prestigious of golf tournaments.

The Kenosha Country Club is one of only two Ross designs in the state of Wisconsin, along with Oconomowoc Golf Club (west of Milwaukee), which was built seven years earlier.

While the new course was under construction, golf presumably continued at the Allendale site through the 1921 season, although the 1920 Sanborn Insurance map shows the area mapped out with streets.

Once the Allendale site was abandoned, houses then began to fill in the old golf course land, first along Fifth Ave. in 1923 and then along both Third and Seventh Ave. in 1924.

Today, that chunk of land and its housing stock is one of Kenosha’s most-prized neighborhoods.