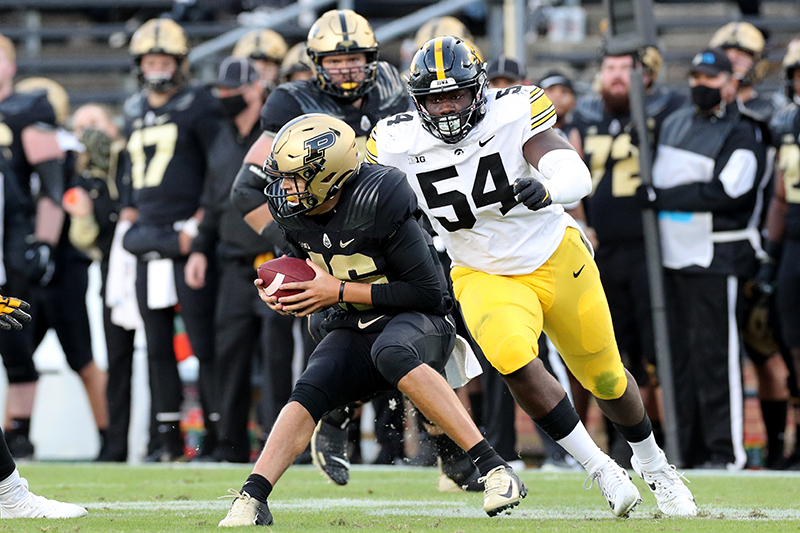 University of Iowa defensive tackle Daviyon Nixon is projected to be the first-round draft selection of the Green Bay Packers, according to The Athletic.
PHOTOS: UNIVERSITY OF IOWA
Sports

If The Athletic is correct, Kenosha’s Daviyon Nixon will be playing for the Green Bay Packers next season.

In his first mock draft for the respected online sports site, Bruce Feldman has the Packers selecting the defensive tackle from Iowa in the first round with the 29th overall pick.

“He will give Green Bay an added jolt to the interior of its defense,” Feldman wrote of the Indian Trail graduate. “The 6-foot-3, 305-pound Nixon burst onto the scene last year and emerged as one of three Outland Trophy finalists after settling in from the junior college ranks a year earlier. Nixon caused all sorts of havoc, making 13 TFLs and 5.5 sacks, leading what was the Big Ten’s No. 1 defense in fewest yards per play allowed. He also had a 71-yard pick-six against Penn State.”

The NFL Draft is April 29 to May 1 in Cleveland.

In his article posted (Tuesday), Feldman, who has been covering college football for over 20 years, also included “Coaching Intel” for each projected pick.

He culled these opinions from coaches, scouts and analysts in the NFL and college.

The skinny on Nixon: “He is a powerhouse. Really explosive. Great with his hands. Good first step. Is very disruptive. This guy jumps off the film. Think his best football is ahead of him.”

Nflmockdatabase.com’s latest consensus of a plethora of mocks has Nixon going to the defending Super Bowl champion Tampa Bay Buccaneers with the final pick (No. 32) of the first round.

Regardless of where he lands, Nixon should  join running back Melvin Gordon (Denver Broncos) and cornerback Trae Waynes (Cincinnati Bengals), both former Bradford players, as Kenoshans in the NFL.

A first-round selection would make Nixon the fifth Kenoshan to accomplish that feat.

Should Nixon play for the Packers, he will become just the second Kenoshan to suit up for the team. Defensive lineman Fred Borak, born in Kenosha on May 30, 1913, played in nine games for Curly Lambeau’s 1938 Western Division Packers.

Tremper graduate Kyle Sebetic, a defensive back, played for the Packers in the preseason and was a member of the team’s practice squad in 2015. The Dayton product never appeared in a regular season game.

Here is a link to The Athletic mock draft.