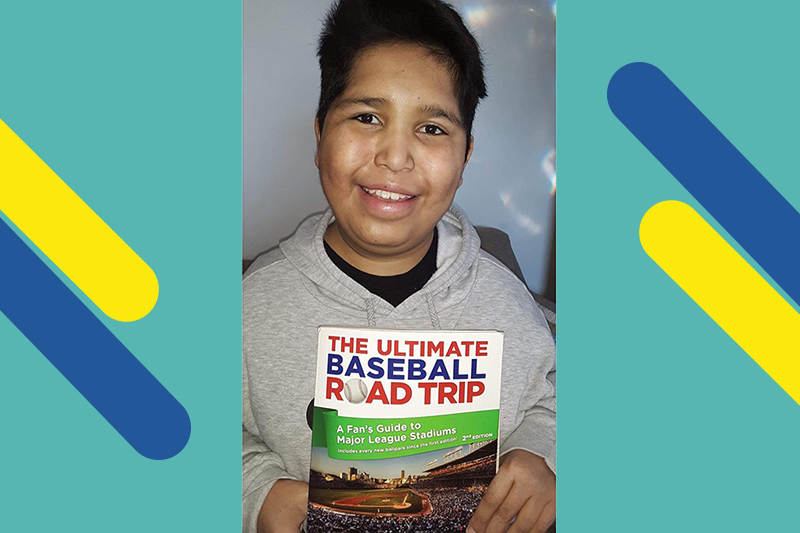 Eighth-grader Manny Rios has a dream of seeing all 32 Major League Baseball parks and likes to study up.
Kenoshans, Local

Like a playlist or a grocery cart, the books people read can tell you a lot about them.

Travel guides or DIY manuals could hint at big plans from seeing the world to rehabbing an old home. The social justice and history genres may attract people in public service or anyone trying to make sense of the 21st century.

Perhaps a science-fiction collection reveals a vivid imagination or desire to get away — far away.

What do those books stacked next to the bed really reveal? We’ll let their readers explain, as the Bookmark column occasionally features Kenoshans willing to share their reading lists.

A long-time public servant and current Secretary of the State Department of Revenue, Barca is a lifelong Kenosha area resident.

Currently reading/recently finished: “Untethered Soul” by Michael Singer, an exploration of becoming free from limitations, soaring beyond boundaries, finding inner peace and freedom, and learning to navigate thoughts and emotions.

Must-read list: “The Five Invitations: Discovering What Death Can Teach Us About Winning Fully” by Frank Ostaseski.

Most read genre: Biographies and history.

Other suggestions/reflections: “ ‘The War With Hannibal: The History of Rome from its Foundation’ by Titus Livius Livy and ‘The Tipping Point’ by Malcom Gladwell are fascinating and compelling and point toward how change happens!’ Barca said.

An 8th grader at Lincoln Middle School, Rios is a familiar face not only in Kenosha, but also across Wisconsin as he serves as an American Heart Association Ambassador.

He is a cheerful and tireless volunteer for AHA, and is currently leading a drive to collect sports and playground balls to distribute to children, in lieu of the annual Heart Ball.

This isn’t just a book for Manny, his mom Anna Rios and sister Miranda. It’s their itinerary. Manny’s dream of seeing all 32 Major League Baseball parks is on the verge of coming true, delayed by the pandemic. He is using the extra time wisely, researching the teams, cities and best ballpark food while he waits.

Must-read list: “I like to buy kids’ cookbooks so I can learn how to make new foods I haven’t tried before and learn how I can change things up a little bit in the recipes,” Rios said.

Most read genre: Sports books, “Mostly baseball and football teams and about the history of the game to how it is now,” he said.

Recommendation: “The Autobiography of Santa Claus” by Jeff Guinness.

“It’s the life of Santa Claus, who he was as a child, what he did and growing up into who he is now, historical people he has encountered,” Rios said. “If you ever wondered, read the book and by the time you’re done, you won’t wonder anymore and you will believe.”

A fourth-generation educator who is an author herself, Bell-Myers has taught both in KUSD and in a hospital setting. With field trips on hold this year, Bell-Myers uses literature to show her 5th graders the world.

She shared with us what she chooses when it’s her turn to read for enrichment and enjoyment.

Currently reading: The “Warmth of the Sun: The Epic Story of the Great Migration” by Isabel Wilkerson

Must-read list: Non-fiction books about people, places, and culture from around the world.

Recommendations: “‘The Hill We Climb’ by Amanda Gorman is absolutely beautifully and playfully written!” Bell-Myers said.

“‘The Warmth of Other Suns’ allows all people to read about an oral history that will present a deeper understanding of proud descendants of enslaved African-American’s sheer perseverance and determination,” Bell-Myers said.

“It is an amazing and accurate read on race, class, and the politics of the 20th century. This book further solidified my great-grandparents’ and grandparents’ stories with much overwhelming gratitude and love.”

Other suggestions: “The Immortal Life of Henrietta Lacks” by Rebecca Skloot, “African American Firsts in Wisconsin 1600-2006: Other Historical Facts of Diversity” by A. Bell-Myers, and “Breath” by James Nestor

Tunkieicz is a veteran journalist whose 20 years in the field evolved into a career in county government, serving as Chief of Staff to Kenosha County Executive Jim Kreuser.

Coincidentally Kreuser was the subject of one of her first stories as a college reporter at UW-Parkside. Tunkieicz is also a civic leader, serving on the Susan B. Anthony Women of Influence Awards Committee, the Kenosha Arts Fund board, and as a member of Tempo, Kenosha Women’s Network and AAUW-Kenosha.

Must-read list: “I’m part of the Rainbow Voices Book Club and up next to read for February is ‘Black Fatigue-How Racism Erodes the Mind, Body and Spirit,’ by Mary Frances Winters,” Tunkieicz said.

Favorite genre: “I seem to turn to crime and mysteries for fun! I’ve been enjoying the Cormoran Strike series by Robert Galbraith aka J.K. Rowling,” Tunkieicz said.

Recommendation: “I’ve been urging everyone I know to read ‘Me and White Supremacy: Combat Racism, Change the World and Become a Great Ancestor,’ by Layla F. Saad. Read it with friends and family. Do the work, confront the issues — it will be worth the effort for you and the world,” Tunkieicz said.

Suggestions/Reflections: Tunkieicz also shared an additional suggestion for a powerful read, which serves as a great way to end this chapter of Bookmark:

“If you love the written word, I recommend ‘On Earth We’re Briefly Gorgeous,’ by Ocean Vuong,” Tunkieicz said. “Vuong is a poet and this is his first novel/autofiction about the immigrant experience and violence he experienced. His imagery is stunning and heartbreaking.”