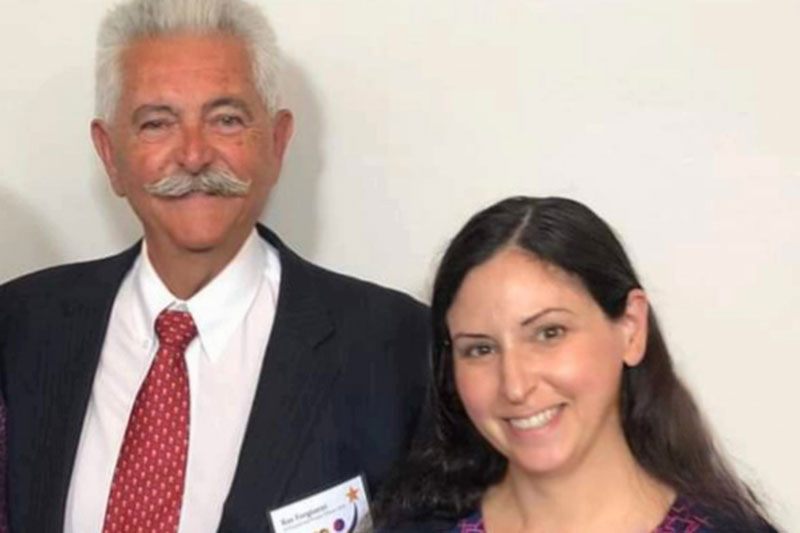 Andrea Forgianni has taken the reins as the executive director of the Kenosha HarborMarket after the death of her father, Ray, in late-September.
Kenoshans, Local

Kenoshan of the Week: Andrea Forgianni

Andrea Forgianni is a trained molecular biologist having studied in Madison at the University of Wisconsin.

Wanting to “help people,” she had visions of putting her degree to work as a research scientist or a physician. While discovering new blood pressure medication or understanding how pancreatic islet cells worked is a truly noble profession, the immediate gratification was not there.

“It wasn’t helping people that day in the moment,” she said.

The 1997 Tremper graduate shifted gears. She studied nonprofit leadership at UW-Parkside and has spent the better part of the last decade working for nonprofit organizations.

“Professionally, I try to operate under the tenet that my maternal grandmother said, ‘What purpose are we here for other than to make another’s life easier?’” Forgianni said. “I want to make my work meaningful to improve someone’s position.

“I want to make my community and the people who live in it better and more prosperous. That is worth more to me than any paycheck ever will be.”

She will now get that opportunity more than ever.

In late-September, Ray Forgianni, Andrea’s father, passed away due to complications of COVID-19. After serving as the city planner and director of development for the City of Kenosha for 33 years, Forgianni went on to become the founder and president of the board of directors for the Kenosha Common Market, which runs Kenosha HarborMarket.

Less than two months after her father’s passing, Andrea Forgianni was tabbed as the HarborMarket executive director.

“I had done some independent contracting work for HarborMarket for a few years,” Forgianni said. “After my dad got sick, I had to step up a little more and volunteer a little bit more time.

“After he passed away (on the final day of the outdoor season), I received a text message from someone on our Board asking me if I was interested in the position. It was when I pulled up to my parents’ house and was unloading the kids from the car, my phone went off, and it was that offer. I like to think he had a little hand in that timing.”

Leading up to HarborMarket’s 19th season opener on Saturday, May 8, Forgianni’s work in recent months has not gone unnoticed.

“Instead of grieving in silence, Andrea stepped up to take the reins of her father’s legacy as executive director,” HarborMarket secretary Lynda Ruffolo said. “Her selfless concern turned towards assuring the HarborMarket vendors and community that they have little to worry about.

“She sent out emails and got on the phone to assure the small business owners that the market is strong and she is there for them. Andrea perseveres and excels during this time of grief. She has my sincere respect.”

As a result of that inspiring attitude, Forgianni has been selected as the Kenosha.com Kenoshan of the Week. She was quick to credit her parents.

“They’re my biggest role models,” she said. “My dad always gave so much back to the community. Obviously, being a public servant for his entire professional career. And, after retirement, helping to create HarborMarket.

“For my mom (Carole), it is her unbelievable level of patience, giving and selflessness. Despite losing my dad and her husband of 47 years less than six months ago, she is a godsend. She makes hot meals for my family three times a week and watches my kids so that I can be the executive director of HarborMarket. She is the most amazing person. I don’t know how she does it.”