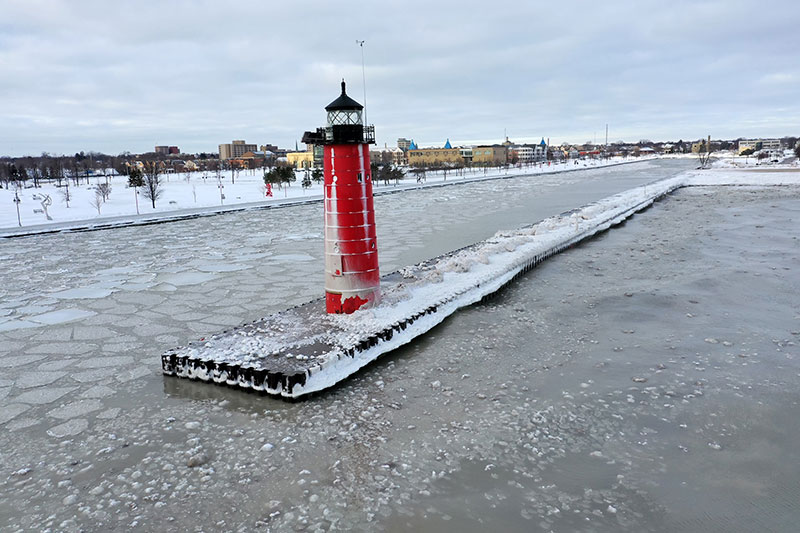 In the spring of 1835, the Western Emigration Company sent a party of three men to Wisconsin with directions to find a suitable site with a good harbor and good farming country nearby.
PHOTO: VIEW FROM ABOVE - WISCONSIN
History, Local

Kenosha was settled on the site of several Potawatomi tribe villages. Prior to 1833, one of those villages was on Simmons Island, a second was in the area of the Rice Park subdivision (north of 52nd Street, west of Sheridan Road and east of 22nd Avenue) and a third was along Lake Michigan to the south.

The only roads in the area were Native American trails, particularly along what is now Green Bay Road toward Milwaukee and an east-west path connecting that trail to Lake Michigan, along what is now 75th Street.

The Potawatomi ceded their holdings in 1833, when they sold the last of their land in Illinois and Wisconsin to the federal government. The tribe had hoped to protect their land claims by fighting alongside the United States in the Black Hawk War of 1832, but growing poverty forced them to sell in exchange for territory in Iowa.

In the spring of 1835, the younger Bullen sent a party of three men to Wisconsin with directions to find a suitable site with a good harbor and good farming country nearby. The party traveled by boat to Detroit, walked overland from Detroit to Chicago and walked and sailed from Chicago to Racine.

Finding Racine already spoken for, they walked south until they reached Simmons Island and the mouth of the Pike River. On June 5, 1835, the party laid claim to the area.

Other settlers followed that summer and the following winter, with the population reaching 84 in 1836 and 337 by 1840. The town was platted in 1836, and the street layout of the time was not terribly different than we know now.

The first settlement was known as Pike or Pike Creek, but the name was changed to Southport in 1837 as an acknowledgement of the southernmost port along Lake Michigan in Wisconsin. Southport was incorporated as a village in 1840.

Wisconsin became a state in 1848, and on Feb. 8, 1850, the state legislature approved our city charter. When the charter was approved, the city changed its name again, from Southport to Kenosha. The new name was really an old name, since Pike was named after the Potawatomi name Kenozia, or “place of the pike,” or possibly from the Chippewa word Kinoje for pike or pickerel.