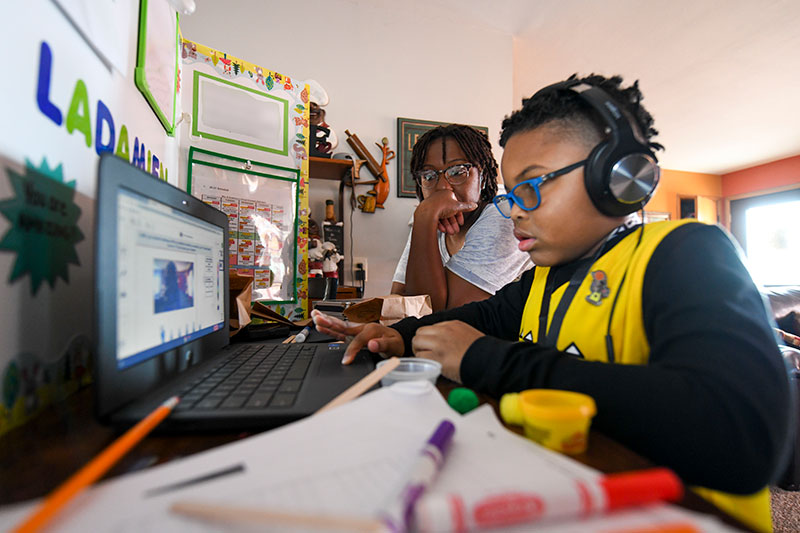 Harvey Elementary School first grader Ladamien Pittman is learning virtually from home this school year and says the adjustment is “different, but the same.”

By that, he explained that while he’s obviously not in the school building, he still feels like he’s learning just like he did in the classroom.

“I pretty much just learn a lot every day just like I did when I went to school,” Pittman said. “Virtual school feels just like normal school, except we have options, and I like that.”

Those options include turning off his microphone or camera, joining a breakout room with friends, learning at his own pace “for the most part” and of course, wearing pajamas.

But it’s not always positive. Just like all things in life, virtual school has its challenges, too.

At times, Ladamien has experienced poor internet connections, widespread community outages, glitches that make his teacher “sound like a robot,” or frozen video presentations. But does he let those things get him down?

“I don’t even worry about it anymore,” he said. “I just tell my teacher when things like that happen and we just figure it out.”

It turns out, Ladamien’s positive outlook doesn’t fall far from the family tree.

“This is new for everybody, so you can’t expect it to be flawless,” Ladamien’s mother, Trina Pittman, said. “But all that aside, you can tell the teachers are trying really hard to keep the kids engaged, and they’re keeping them motivated and wanting to learn.”

Just like his teachers, Ladamien had to learn new skills in order to learn in a virtual setting, such as typing on a keyboard, uploading assignments to SeeSaw and keeping himself on task in the freedom of his own home.

In fact, the family has its Alexa home device set to remind the boys when it’s time to get back to school after lunch, just in case.

“They own it,” Trina said about her sons learning virtually. “They know how to navigate from class to class, they keep on schedule, and they get through the day independently.”

Ladamien’s family had to adjust for virtual learning in order to accommodate for his brother, Ladonte “DJ” Pittman Jr., a fourth grader at Harvey, to both learn at home.

The boys’ parents work opposite shifts, so they’re able to cover the time needed to be at home with the children, which offers its perks as well.

“It’s nice hearing them interact with their teachers and watching them raise their hands and just engaging in class and offering their opinions in discussions,” Trina said. “It’s not something we as parents get to see when they’re at school.”

Trina also said her and her husband’s relationships with their sons’ teachers have improved in the virtual setting.

“I feel like I communicate more with them,” she said. “If I have any questions or concerns, I’m able to send them a message and I get a response, sometimes instantly. It’s nice to be able to communicate with them, especially during this time when everything is so new.”

While some families worried about the social effects virtual learning would have on their children, making connections is no problem for Ladamien.

“I feel like everybody is my friend,” he said. “Almost every class I go in, everybody in the class becomes my friend at some point.”

Ladamien and his brother also are reminded of the support of their family through daily reminders, some of which decorate their project boards that separate their workspaces at the kitchen table, such as “You are amazing,” “You got this,” “Smart guy,” “Do your best,” and “perseverance” – an important word for everyone to embrace during a global pandemic and year of unknowns.

When Ladamien was asked if these messages help him remember his family has his back, he said, “Yes, I always feel that!”